Courtesy of Ken Glass here are some images of Japanese aircraft models taken at the IPMS USA National Convention held in Columbia, South Carolina from 3rd to 6th August this year. Attributions are provided where known but I'll be happy to add or correct any details if you care to drop me a line, thanks. 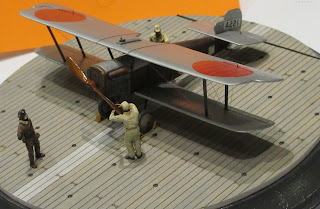 This unusual Mitsubishi 1MF1 model and carrier deck diorama was made by Joseph 'Buzz' Pezold and features the 1/72nd Phoenix/Blue Rider vacform of the pioneer IJN biplane. 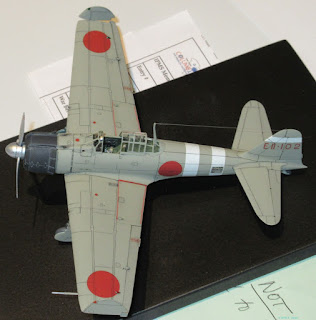 A fine 1/72 Fine Molds A6M2  by David Pratt of New York, one of the aircraft contest judges. The model was reportedly painted in Floquil's 'Old Concrete' with RLM 02 fabric surfaces. This aircraft was flown by NAP 1/c Tetsuzo Iwamoto, the leader of Zuikakau's 1st Section on CAP duty during the Pearl Harbor attack. Iwamoto was already the IJN's leading ace from the so-called China Incident and went on to amass an astonishing record of victory claims, surviving the war. 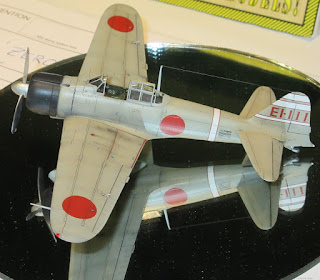 This sharp looking 1/72 Tamiya A6M2 was made by Tim Bates of Dalton, GA. The model represents the aircraft flown by Hikotaicho Lt Hideki Shingo who led the second wave from the carrier Shokaku during the Battle of Santa Cruz on 26 October 1942. 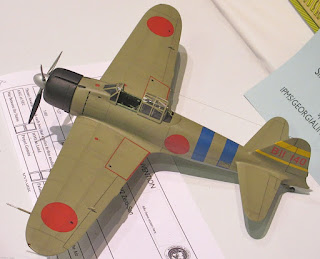 Another A6M2, this time built from the Hasegawa 1/48 kit and representing 'BII-140' an arcraft flown by Lt Sumio Nouno leading the 11th Section of the 4th Hikotai from the carrier Hiryu during the Pearl Harbor attack. 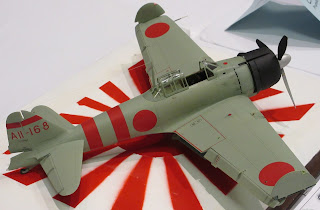 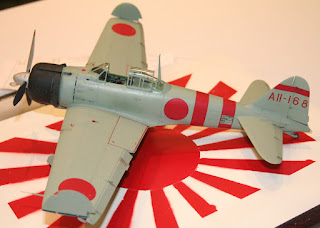 To a larger scale Clyde Angelo of Los Angeles built this A6M2 from the 1/32 Tamiya kit displayed on a striking Rising Sun base and representing 'AII-168' from the carrier Kaga's 1st Hikotai, 13th Section led by NAP1/c Akira Yamamoto.  This pilot claimed the first air victory during the Pearl Harbour attack, shooting down a civilian aircraft, then reported destroying six aircraft on the ground at Hickam Field in strafing attacks. With total claims of 13 aircraft shot down Yamamoto was killed bailing out over Japan on 24 November 1944 when his parachute failed to open, the victim of a B-29 turret gunner.

Another Tamiya 1/32 A6M2 representing a section leader's aircraft from the carrier Akagi by an unknown builder. 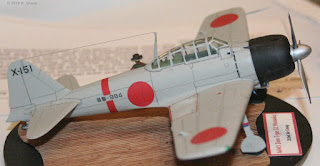 A Tamiya 1/72 A6M3 'Hamp' representing a 202 Ku aircraft 'Hokoku 994' in November 1942 and built by Roger Woods. This aircraft was regularly flown by NAP 3/c (later WO) Kiyoshi Ito who ultimately claimed 18 victories and 14 damaged enemy aircraft. 3 Ku was re-designated 202 Ku from 1 November 1942 and Ito had flown in the 3 Ku Rabaul detachment combat operations over New Guinea and Guadalcanal before re-joining the main unit in the Celebes for operations against Australia. 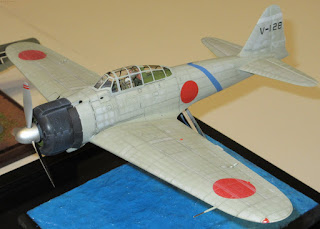 Stuart Gordon also chose the Tamiya 1/32 A6M2 kit to make this impressive display of Saburo Sakai's famous Tainan Ku 'V-128' on its epic flight home after the fateful encounter with SBDs on 7 August 1942, its severely wounded ace pilot, head lolling and semi-conscious beneath the shattered canopy. 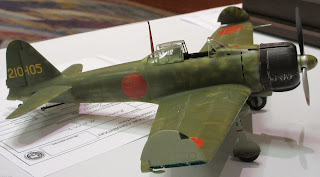 Mark Vandon rang the changes with this field camouflaged A6M2 also built from the Tamiya 1/32 kit. If there is a story here I'd love to hear about it. 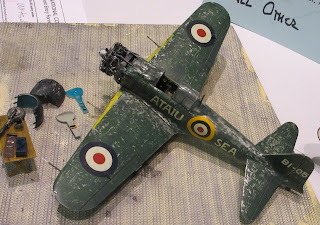 Scott Briclear  used the Hasegawa 1/48 A6M5 to create this nicely weathered former 381 Ku example 'B1-105' under new ownership in ATAIU-SEA with engine exposed and ancillary bits displayed on a PSP base. 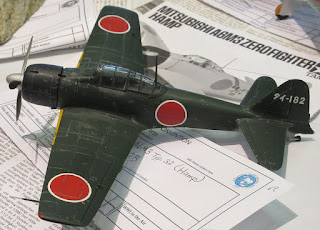 A very nice A6M3 Model 32 'タイ-182' (Tai-182) from the Tamiya 1/48 kit with excellent black green paintwork and restrained weathering by an unknown builder. The model represents a Tainan Ku aircraft during the air defence of Taiwan in September 1944 and very nicely too.

Ken,
Thanks for the photos. Hope to see more soon. Any floatplanes.

Wow. Do I miss going to the Nationals! Yet it's much better, somehow, to see what I'm missing. Thanks a lot, Ken, for the Zero Visibility Special. Fine photos of some really beautiful models, kudos to the builders.

Thanks for the comments chaps! Ken took the photos and very kindly sent them to me. The formatting of the pics, presentation and write-ups for the blog article just magically happened all by themselves, although it took an hour or two. ;-)