More Japanese aircraft models from the IPMS USA Nats courtesy of Ken Glass. Although IJN aircraft models were prolific there were also some very splendid Army birds. As before I'll be happy to add attributions or additional details for those aircraft by anonymous builders. 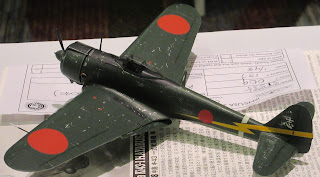 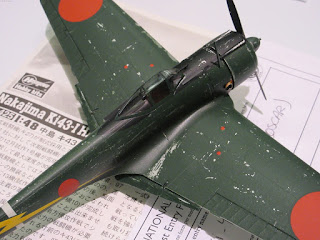 This Ki-43-1 from the hands of an unknown builder is very well done, representing an aircraft of the 2nd Chutai, 50th Hiko Sentai. It was made from the Hasegawa 1/48 kit but the 'btoken-backed' appearance is not evident in this view. The weathering is nicely restrained and from this angle the model shows off the graceful lines of Hayabusa very well.

A purposeful looking Ki-45 Kai Tei Toryu night fighter of the 3rd Hikotai, 53rd Hiko Sentai, in splendid Homeland Defence markings believed to be by Bill Brickhouse of Newport News, VA and built from the Hasegawa 1/72 kit. Ki-45 Kai Tei was a retrospective designation for 472 'Tei equipped' (oblique firing armament) Hei with 4000 base number serials manufactured at Akashi from May to December 1944. 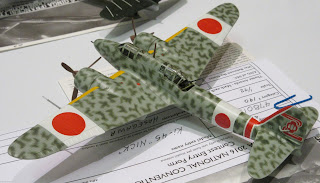 Possibly by the same builder this Hasegawa 1/72 Ki-45 Kai Hei of the 2nd Kogekitai, 4th Hiko Sentai, also in Homeland Defence markings, displays a skilfully painted mottle camouflage. The Ki-45 Kai Hei with the muzzle of the Ho-203 37mm cannon projecting from the nose were the first of this designation, modified from approximately 65 Ko aircraft at the First Army Air Arsenal from May to October 1943. Subsequently Kawasaki manufactured a further 595 Hei with 3000 base number serials from November 1943 to July 1945, the design being modified to incorporate a slightly longer, more sharply pointed nose extended to conceal the muzzle of the Ho-203. 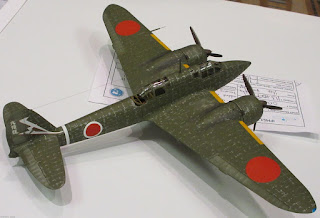 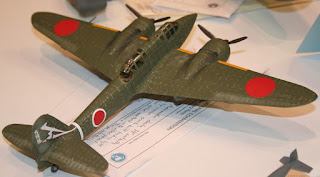 This late production Hei of the 5th Hiko Sentai has been meticulously weathered to reveal the underlying framework of the aircraft and was built from the venerable Nichimo 1/48 kit.  The unit began using the tail emblem shown from around September 1944 when it returned to Komaki in Japan from the New Guinea theatre. The aircraft were individually distinguished by the names of place or mountains associated with their pilots and painted on the rudders in Kanji or Hiragana characters. 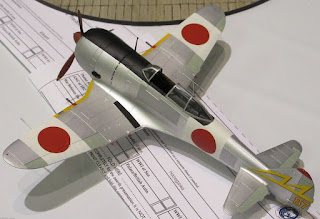 And finally for now, another Homeland Defence bird, this time in contrast to the sombre Toryu a gleaming Ki-44 Shoki of the 47th Hiko Sentai built from the Hasegawa 1/48 kit. The top view shows off the distinctive airframe design of Shoki, with that large engine cowling, slightly cranked and forward raked wings and the long, slim tail. Beautiful.

Thanks for both the images and the posts. Sure like that Hayabusa! Would love to see Fine Molds do a -1 to replace the less than appealing Hasegawa kit.

Another great group, thanks for sharing them with us, Nick. Ken, you've still got the touch.

Thanks so much for the images and the posts Nick.