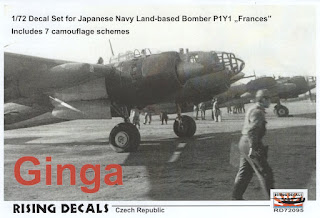 Included in the recent bumper crop of new releases from Rising Decals is this splendid 1/72 scale sheet for the good looking IJN twin. The lineage of the units operating this fast bomber is almost as complex as that of the Army's Ki-46 units and Rising offer a selection of seven schemes for the P1Y1 in some of the better known units. Designed for the excellent Hasegawa kit the decals are no doubt adaptable to the older Revell-Takara kit, of which more here in due course. Of special note are the over painted and weathered hinomaru borders, very well represented on sheet RD72095 which offers the following subjects:- 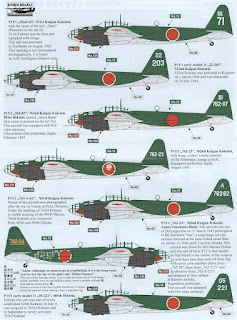 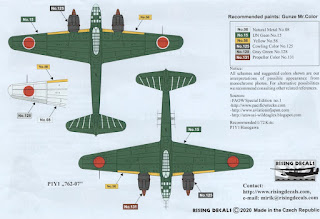 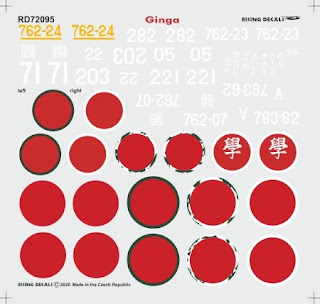 This is an excellent, well conceived and well crafted sheet which will enable a number of interesting and important Ginga subjects to be represented.  Paints suggested include Gunze 15 IJN Green (Nakajima) for the upper surface of all subjects. The jury is out on whether all Ginga had natural metal under surfaces as Japanese references, older and more recent, vary, with some depicting and describing grey. The NASM example s/n 8923 has a natural aluminium under surface but was manufactured by Nakajima in June 1945 and is configured as a night fighter. The Hasegawa kits major on silver under surfaces throughout. The upper surface green on the NASM survivor was also matched by Robert C Mikesh* to Munsell 5 G 3/1 or Thorpe's N2 (thus closer to IJN D2). In Model Art 458 aircraft 762-15 is depicted in overall dark green. Spinners were usually painted aluminium or dark brown. Interior cockpit colours of the NASM example are varied green hues, from a lighter greyish green, through olive green to the darker black green of some components - not something to sweat about, especially if the canopy of the model is closed up.
With special thanks to Mirek of Rising Decals for the review sheet. Data included in this review on the various Ginga units is drawn from Dr Yasuho Izawa's seminal 'Rikko & Ginga' with acknowledgement and thanks. Bunrindo Co., Ltd., released a 144-page Special Edition FAOW title on the 'Navy Bomber (Ginga)' in 2000 which is well worth seeking out and should help unravel the various airframe and engine configurations of Ginga..
* 'Japanese Aircraft Colors at NASM' by Robert C Mikesh, Asahi Journal Vol.3 No.1 (undated)
Image credit: All © 2021 Rising Decals
Posted by Straggler 脱走兵 at 15:41

Fantastic! Thanks for making us aware Nick.

Interesting post, Nick, thank you for sharing this information. I have the FAOW Special you mention - but can't read it of course. (Its photo coverage is unsurpassed.

The small number of a/c planned for the Tan operation always puzzled me. Was it deemed necessary to avoid detection?

Not sure whether you mean 762 Ku or the IJN in general? 30 Ginga were originally selected for the operation but only 24 scheduled to sortie. It was a resurrection of the failed operation to attack Ulithi in October 1944 with Ginga and Tenzan.

The 2,500 km distance to the target was a challenge as well as navigation so that was undertaken by the flying boats from 801 Ku.

Sorry, I meant the IJN and the attack in general. Thanks.

Ok. By that time IJN were almost on their beam end and more often reacting to Allied initiatives rather than planning their own bold moves. Also doctrinally the adoption of special attack was having an effect on planning and resources, trying to bolster defences everywhere. Their 'last great offensive' - A-go, the preemptive defence of the Marianas - drew on major resources with nine carriers and no less than 439 aircraft, including 234 Zeros, both A6M5 and A6M2 fighter-bombers, as well as up to 630 participating land-based aircraft. 407 aircraft losses have been estimated but also significant losses in experienced aircrew and air leaders. That was followed by the further attritional wearing down in the Philippines campaign, by the end of which the IJN were responding to direct threats against Taiwan and the Home Islands. Tan-go could therefore be seen almost as a Parthian shot following the loss of the Philippines, intended to delay further Allied advances.

Nick, thanks for the additional details. If your article (and answers here on Comments about Tan No.2 interest others), they might enjoy reading something it led me to. It is found on combinedfleet.com, an article by Hackett and Kingsepp, "Operation Tan No.2". New decals...lead to old (and interesting) history. A Parthian shot indeed! Thank you A of J.