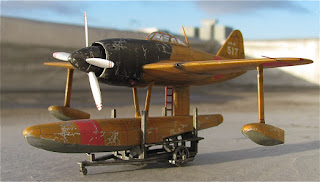 Rob Ronconi also kindly shared these beautifully photographed images of his second float fighter model, this time built from the 1/72 scale Hasegawa kit of the prototype Kyofu with contra-rotating prop and finished in overall orange, again mixed from Tamiya paints. Some artistic licence was exercised with the tail markings which were applied to one of two Shiden-kai Model 32 (experimental Shiden-kai 3) prototypes. 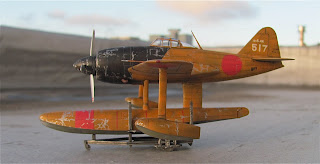 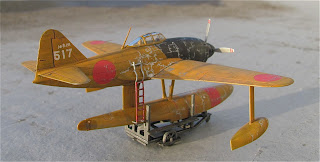 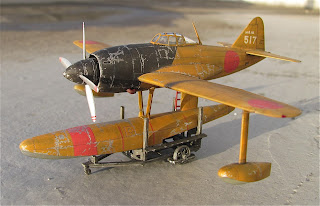 The Kyofu prototype has been variously depicted in overall orange-yellow or overall silver (aluminium paint) and a more in-depth article on Kyofu colours, held over since 2010 (!) is planned. 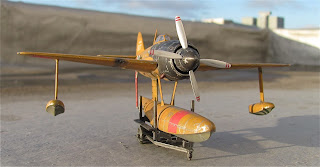 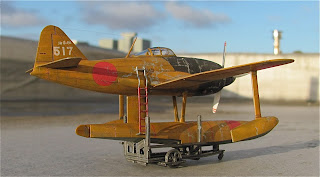 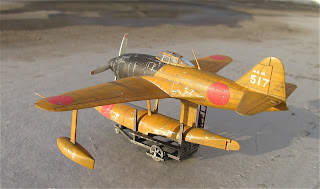 With very special thanks to Rob for kindly sharing these images of a stunning, sun-kissed Kyofu prototype. 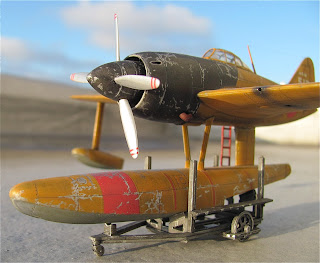 Another beauty. Rob, I'd be interested in how you mixed the orange yellow.

Stunning pair of Kyofus Rob. The weathered orange is striking. Again such realistic worn appearance. Makes my imagination ponder serious prototype testing and armament trials with the gun staining like they were working Rex into fighting shape. Nice work sir.

Excellent! I'm speechless about this perfect representation of the Kyofu, a model I always wanted to build in 1/48 in exact those prototype colours. Please stop showing these wonderful models, Nick, I don't have enough lifetime to follow the desire to copy them...

Gentleman, I am both encouraged and gratified to read the very kind words concerning my models... Thanks to Nick for such an outstanding a resourceful blog

As far as the color mix for "Mr.Rex" prototype it has been some time ago. If I remember correctly...I primed the whole model with a coat of Tamiya gloss white. Then pre-shaded dirty brownish-black in the panel lines and streaking. Then gave it a coat of Tamiya Orange, which is pretty translucent, especially when airbrushed on....I would suggest painting it brown and then airbrushing Tamiya orange. Orange and with some drops of yellow may work as well. ..Jim I hope this helps :)

Rob,
I've really enjoyed the many fine models you have shown us here on the blog in the past year. That said, this is now my favorite. Marvelous work! Prototypes, armed or not, must have eventually been wrung out, and seagoing birds might have been places where a re-paint was out of the question. Thanks to Straggler for opening the doors and framing these terrific photos.

My first exposure to photos of aircraft models were in the Aircraft Recognition handbook from my dad's US Navy service days. It was a pretty extensive book, in a brown leatherette cover, with many tabbed sections for each country. Many of the Russian types were retouched photos or nicely built and finished models. Then came the early issues of Scale Modeler. I looked through one recently, courtesy Chris Luevano. Looking at photos like these, the difference is night and day. Great work, Rob.

That leather-bound USN aircraft recognition book must have so much fun to look though.

Thank You, Mark, for your kind words "Mr Rex" is one of my favorites as well :)