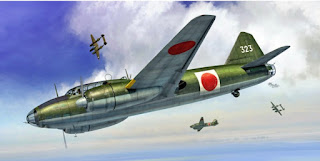 Several correspondents have kindly made me aware of the announcement of a new 1/72 scale injection moulded kit of the Mitsubishi G4M1 'Betty' bomber from Sword Models.

From the details on their website markings options for two aircraft will be provided as follows:- 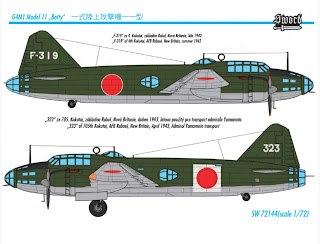 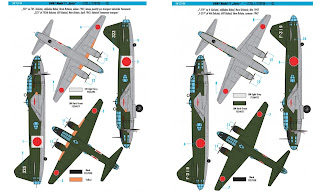 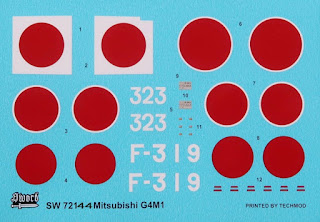 34077 does not exist in the standard as a matt colour but as the gloss colour 14077. FS 36492 is not a neutral grey but consists of the pigments rutile titanium oxide (white), yellow iron oxide and carbon black (blue shade). Leaving aside the question of whether Betty was painted grey or left natural metal beneath the cited colours seem ok-ish. The decals sheet is by Techmod. Hannants UK display a sprue frame (below) and quote a price of £40.49 after 10% discount. No further details known but hopefully this kit will be a worthy successor to the Hasegawa G4M1 of 1969 vintage. 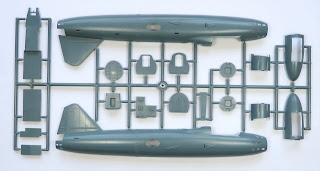 I'm sure there will be high demand for this much need update of such an important and ubiquitous aircraft...count me all in !!!

Very surprised at this revelation...a kit we needed probably more than we realized and likely never expected. I imagine that now the old Hasegawa G4M1 that lies near my workbench in a box, rivets sanded off with the Falcon canopies awaiting use will now collect dust eternally. Im buying this and building it as soon as it becomes available. Now does any manufacturer have the boldness to make a G4M3 ( conversion would be ok)? A Model 34 Betty has long been on my list. More dreaming on my part but what the heck...never saw this coming.

Very cool, it seems we may be in a small renaissance with all the new Japanese kits popping up. I have the Hasegawa 1/72 kit that I purchased more because it was cheap (secondhand) than any interest in building such a small kit.

Welcome news, I wish someone other than Sword had done it though. I also wish the bomb doors had been molded as separate pieces since they were so often taken off and left off.

A successor to the old Hasegawa stager (which I recall as a nice kit and pretty accurate in shape) was overdue. Kudos to Sword for making it happen. I look forward to seeing someone's build of this one soon in these pages!