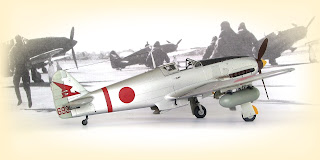 Michael Thurow kindly contributed these images and article summarising the build of his splendidly smart looking Hien model from the Hasegawa 1/48 scale kit quite some time ago and he has been patient for its appearance, the delay being entirely my responsibility. In my opinion it is a very good thing which has been worth waiting for and as they say 'better late than never' which must, I'm afraid, pertain to some other kind contributions sent in during the Covid.  Over to Michael then:-
Michael Thurow's Kawasaki Ki-61-I Tei of the 56th Sentai
Hasegawa 1/48
Long projected, 2021 is finally going to be my 'Kawasaki' year, and the Ki-61-I Tei is the frontrunner and the first one I have completed. This pleasant Hasegawa kit has idled in my stash for a deplorably drawn-out period of 25 years. 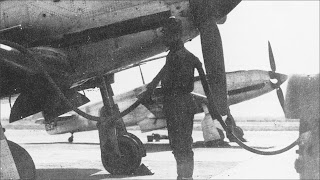 I was looking for an alternative to Kobayashi's popular 4424 but found it difficult to locate a nice example in pure natural metal, the simplicity of which befits the Hien's shape perfectly. Eventually I detected a 56th Hiko Sentai machine in the background on this photo which, as a far as I'm aware, has not been presented in profile yet. 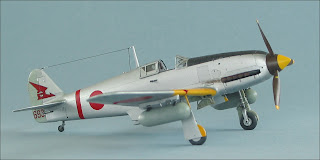 All relevant markings appear to be distinguishable - a red command stripe (compare with the hinomaru), a coloured spinner tip that I took for yellow (white and silver seemed less likely to me), and the number 693 (red in my opinion). Adorned like this it might have been the mount of the 3rd Chutai-cho, whose name I couldn't establish. 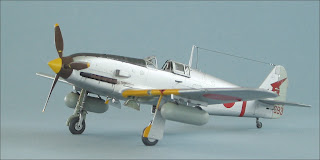 Over time I had acquired a considerable stack of after-market items to enhance this model (and the other Ki-61 & Ki-100 that I work on in parallel). Most parts, though intended for the later Tamiya product, go surprisingly well with the Hasegawa kit, which speaks for its accuracy.

After clearing the kit's side walls the Aires cockpit and front deck fitted with no problem. Some Eduard PE parts and scratch-building enhance the detail. I followed Nick's suggestion of grey-green (as opposed to olive-brown) for the interior of silver-coloured models. Photos in 'Pacific War Eagles in Original Color' as well as many monochrome prints confirm this choice.

The engine top cover is conveniently molded as a separate part on the Hasegawa kit, but I was a bit frightened of cutting the lower panel to expose the bottom section of the fine Aires engine, particularly as I wanted the model to be presentable with open and with closed engine compartment. In the end, not only did the motor with bearers slide into the assembled fuselage after only slight adjustment, I also found a workable solution for the covers by combining and adapting pieces from three different sets.

I used supplementary 20 mm Ho-5 cannon barrels from Brassin because I affixed the Aires ones to the hood. The trick was necessary as the internal barrels wouldn't reach through the gun ports. Finally I added a clutter of pipes and wires to make the open area look busy. 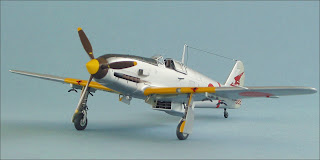 Another modification concerned the external tanks. While the Brassin parts are excellent - especially the superbly detailed pylons (though appr. 1 mm too long) - I had to treat the smooth tanks with streaks of surfacer. Drop tanks of the late-war period were made of bamboo and paper creating a somewhat uneven skin. The tanks are detachable in preparation for different diorama postures. 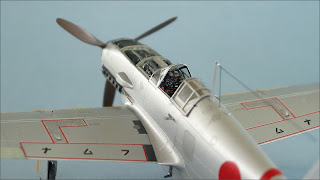 The aluminium finish didn't cause any particular complication, nor did the markings. I made use of the DDM (Dead Design Models) inspection cover masks that I had purchased to test this product. I won't use any in future because the forms can also be cut from standard masking tape, and the DDM adhesive is too strong so that the layered silver tends to get pulled off. Mr Color # 8 Silver from the rattle can made up the first coat and Tamiya TS17 Gloss Aluminium the second one which was wet-sanded with micro- finishing cloth 2400, then polished and sealed with semi-gloss acrylic. 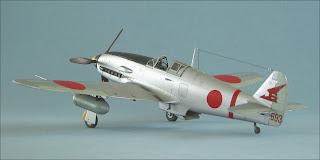 There are many suitable after-market decals for the Hien. I favour the Techmod series from which I took all stencils. The hinomaru are Hasegawa originals while the 56th Sentai symbols were printed on clear decal sheet and applied in two layers (front) and one layer (rear). 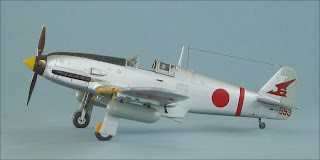 Well worth the wait!

...such a striking NMF example and an excellent choice of livery.

Thanks to Michael and Nick

I agree, this model looks best in a solid aluminium finish.
Compliments for your detailing work, indeed a time consuming business :-)
but it paid off !

Sometimes the simple schemes really show off the aircraft lines the best. Great job, Michael! Thanks for sharing with us, Michael and Nick.

Beautiful work throughout - and the fit of those cowl panels is remarkable. I like the finish and your notes on it might be very useful when I finally tackle Fine Molds' 'Kamikaze' - the finish you achieved was exceptional and its smooth, muted reflectivity reminds me of that one very much.

Michael, you built that Tony on a tight-wire and made it across! Nick, thank you for featuring it here.

My compliments on this beautiful work! Despite more colorful subjects are eye-catching I agree with you that solid (light) color schemes enhance the aircraft lines. Where and when possible I prefer NMF or aluminium painted subjects -that's why one of my favorite subjects are the Italian post-war aircraft as they all were aluminium painted...

Very fine work, Michael. Thanks to you & Nick for sharing it with us.