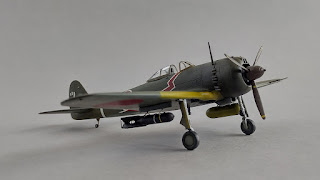 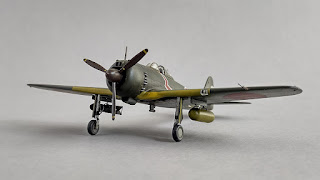 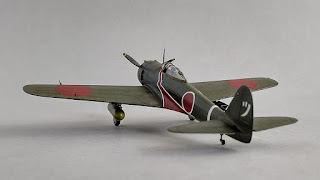 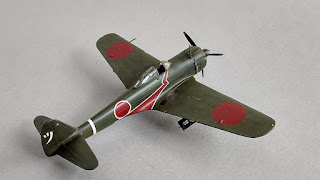 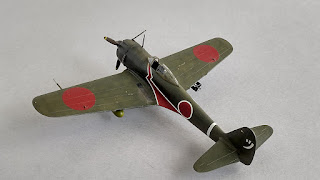 The lightning flash adorned Oscar represents the lead aircraft of one of the first Army special attack units (tokubetsu kōgeki tai 特別攻撃隊 or tokkōtai 特攻隊) the 10th Hakkô-tai. The term Hakkô (八絋隊- 'eight directions') was inspired by a saying 'Hakkō ichiu' ('eight crown cords, one roof') attributed to the Emperor Jinmu and interpreted by the Japanese nationalist Chigaku Tanaka to mean Imperial rule divinely ordained to cover the whole world. The Hakkô-tai were those special attack units organised in the Philippines by the 4th Air Army from 7 November 1944 to 13 January 1945.
The 10th Hakkô-tai were the second special attack unit formed from within the Hitachi Air Training Division on 16 November 1944 and commanded by Lt Shinji Tsuruga whose aircraft carried the katakana character 'Tsu' on the rudder. The unit's flight to the Philippines was disrupted by bad weather and the pilots had to make forced or emergency landings in various places, with Ensign Kazuo Nagata being seriously injured. On arrival in the Philippines on 18 December 1944 Lt General Tominaga, commander of the 4th Air Army gave the 10th the honorific title Jungi-tai  (殉義 -'Righteous Martyrdom unit'). On 21 December 1944 five aircraft of the 10th led by Lt Tsuruga attacked a supply convoy of 25 vessels off Mindoro. The Liberty ship SS Juan de Fuca managed to shoot down one of the Oscars but was hit and damaged by one of them. Two other vessels LST-460 and LST-749 were also hit and set on fire, later being abandoned and sunk as the fires became out of control. On 22 December two more aircraft of the unit, flown by 2nd Lt Mitsuo Hino and Cpl Yoji Hayashi sortied to attack the convoy, one of them diving unsuccessfully on the USS Bryant DD-665 off Doro Island. On 29 December Cpl Yoshiji Takamiya joined other aircraft in Tokko attacks, his fate unknown and finally on 7 January 1945 the remaining pilot Cpl Azuma sortied towards Lingayen Gulf and an unknown fate with no US ships hit. 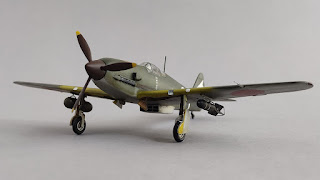 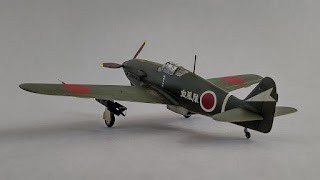 The Hien shown above is the veteran Hasegawa kit from 1973 also with additional drop tank and bomb from the Arma Hobby Hayate. Zegeye's model ably demonstrates that this kit still builds into an attractive miniature which captures the lines and sit of the Hien. The model represents an aircraft of the 110th Shinbu-tai 'Keppu-tai' (血風隊 - 'blood wind') as flown by the unit leader 2nd Lt Hayato Tanaka. The characters for Keppu-tai are painted on the fuselage and the pilot's name vertically beneath the cockpit, preceded by the character 故 meaning late or deceased. All gun armament was removed from cowling and wings. This special attack unit of 12 Hien was formed from the 5th Rensei Hikotai in China, conducted special attack training at Beijing during which the second shotai leader 2nd Lt Masanao Mizusaki was killed and Cpl Shohei Otomo was assigned as the second shotai leader. On 25 May 1945 the remaining pilots and aircraft transferred to Chiran airfield in Japan. The following day at 1318 hrs 2nd Lt Tanaka led six aircraft flown by Cpls Shohei Otomo, Koshimura, Masao Nakamuta, Hiroshi Kiyosawa, Kazuo Kôra and Keijiro Nishimura against US vessels off Okinawa. Cpl Otomo's wingman Cpl Iwao Ota had crashed and was killed immediately after take-off. The 3rd shotai leader 2nd Lt Toshiro Kubokawa was injured and his aircraft severely damaged when it failed to get airborne and overturned, whilst Cpl Hisanori Murakami's aircraft had engine problems and his take-off was cancelled. The weather was bad with a very low ceiling and 2nd Lt Tanaka ran out fuel and was seriously injured in a crashed landing on Amami Ōshima, one of the Satsunan islands between Kyûshû and Okinawa. Two Hiens from the unit found and attacked the coastal patrol craft PC-1603 in Kimmu Bay, hitting it on the port and starboard sides, killing three crewman and wounding 15. The badly damaged vessel was subsequently abandoned and scuttled. 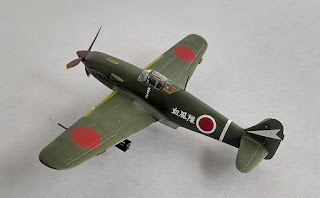 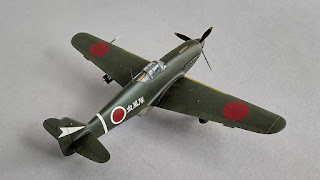 The 5th Rensei Hikotai maintained detachments at various Chinese airfields and on 27 February 1945 Hiens from this unit were encountered as far south as Hong Kong. The unit's red arrowhead 'V' tail insignia was painted in white on the tokkô aircraft. Before the unit departed Xī jiāo airfield at Beijing for Ashiya airfield in Japan each pilot's name was painted in white below the cockpit preceded by the character 故 for late or deceased and the characters 血風隊 for 'Keppu-tai' on the fuselage. 3rd shotai leader 2nd Lt. Toshiro Kubokawa noted that his assigned aircraft, a new Hien, Aikoku # 7436, donated by Mr Etsutaro Ichihara, was painted matt black like a crow on the upper surfaces with plain red hinomaru. 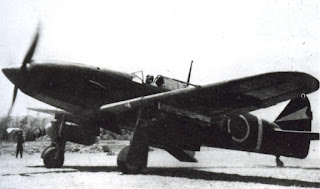 Both kits were finished with Gunze (Mr Hobby) paints and Create 301 decals. With special thanks to Zegeye for sharing the images here.

Great history, Nick, to accompany Zbyszek's wonderful models. Thank you both! Which Gunze No. did you use for the topside?

Nick, thanks for hosting it, and for the interesting Tony photo as well.

Nicely done Zbyszek. Your models have rekindled my interest in the types. I especially like the bomb and fuel tank combo.

Thank you for your kind words...
Michael.... the Oscar was panted Gunze C304 and Hien was painted Gunze H60 IJA green

An Excellent pair of aircraft, perfectly crafted with very clever use of the new Arma Hobby armament

Gratitude to both Zbyszek & Nick

A black Tony? It does make me want to throw a Hien together and whip out the trusty old Paasche. Cool stuff. Excellent builds Zbyszek. Thanks.

Very nice work, Zegeye. As usual, Nick has provided a wealth of his research on these particular subjects. Thanks to you & Nick for sharing your efforts with us.