Kobayashi's Other Hien by Michael Thurow

Another Terrific Tony from Michael with his personal nostalgia for the Revell box art from 1963 which is shared. Over to Michael then:-

'This is Revell's box art that sparked my life-long passion for Japanese aeroplanes. Acquired in 1967 from my meagre pocket money it was my second 1/72 scale model - the first one was the Revell P-51D - and those earliest subjects are still my favourites (proof of how deeply childhood impressions engrave on a person). 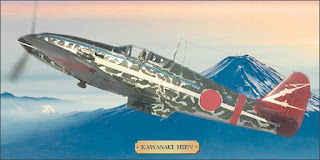 'I couldn't resist and replicated Brian Knight's impressive illustration, which in spite of some artistic licence, might well represent c/n 3295, the 'other' Hien used by Major Teruhiko Kobayashi, Sentai-cho of the 244th Hiko Sentai. With this Ki-61-I Hei he undertook his ramming attack against a B-29 on 27 January 1945 and bailed out successfully to fly again the next day. 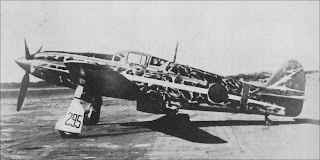 '20 years after my childhood romance with the Hien, meanwhile a staunch 1/48 convert, I returned to build this Otaki kit, then the only Ki-61 available in quarter scale. Last year I finally refurbished it with several upgrades. 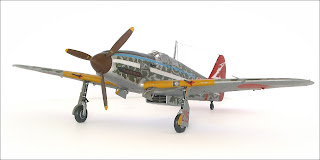 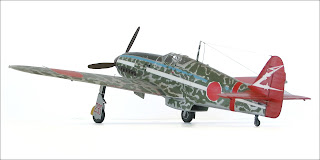 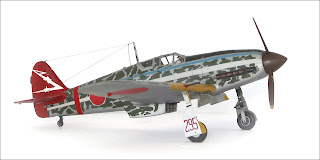 'A surplus Aires engine hood, replacing the original part, improved the nose contour. I covered the gun troughs as seen on the familiar photograph of c/n 3295 above. Apparently Kobayashi had the nose armament removed by that time to save weight. It's not clear if the wing guns were also gone (together with the gun sight and the venturi tube) in preparation of the ramming attack. For my model I assumed that he eliminated only the 12.7 mm Ho-103 guns, which didn't synchronise well (Mikesh 2004), in favour of the much acclaimed Mauser MG 151/20 wing cannon. 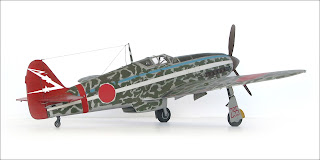 'Those acquainted with the Otaki/Arii kit* may detect some more modifications on the next picture. The lower surface and extremities are actually the only section of the model that was completely refurbished. 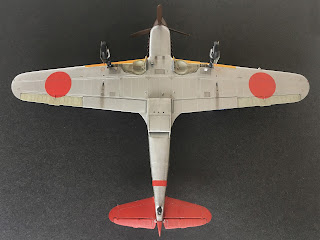 'Even with this all-out restoration I kept my original camouflage, replenishing some blotches here and there. All decals and markings were renewed, however. I'm happy that this treasured model can now hold its own against my more recent creations and thus build a bridge back to 1967 when it all began. 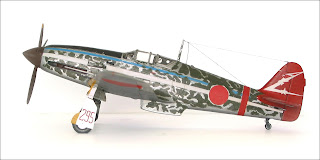 '* Otaki/Arii kits can be a very entertaining experience. Most provide surprisingly correct dimensions and contours (better than on some modern kits) but the cockpit and other detail is generally very poor. As I still own a couple of new boxes and several models that need restoration I developed an inexplicable affection for them and enjoy their upgrading. In regard to detail obsession I'd like to share a little anecdote: The Ki-61 has a small canopy stopper on the port side behind the rear window, often overlooked by modellers. When I checked drawings and photos for its exact location I detected a very small recessed circle on the model at exactly the right position - hail Otaki's dedication!' 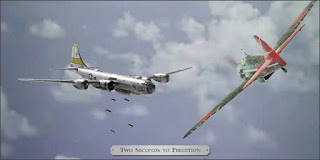 Great post. The model you enjoyed building, but later decided ‘had some problems’ and consigned to a box in the attic…is probably not going to be replaced by one that doesn’t. And the hardest stuff is often already done on an orphan build. Gravy. Maybe this post will send some of us back to the scrapyard.

Thanks for the chance to see this this one, Nick. Over the years, Aviation of Japan has been a champion of those oft-forgotten 1/48 Otaki kits. Another fine project and article, Michael, thank – it’s interesting to compare the side view of the model with a well-known picture, it captures it so well.

Some great work there driven by passion. It was a Revell 1/72nd "Fighting Deuces" boxing that included a Hein in it that put me down this road.

Mr.Thurow is a true double threat as not only a top-notch builder of model aircraft but a highly accomplished artist as well, with truly brilliant paintings!

Thanks to Michael and Nick

Indeed, those Revell "Fighting Deuces" box tops still thrill after all these years :)

Interesting and well done build of a true classic using modern upgrades. Excellent work Mr. Thurow. It was Airfixs Val and Dinah box art that got me but the Fighting Deuces are right up there too.

Excellent work, My old kits were definitely no where near your standard, so not worth sprucing them up. Besides, I think most were tossed out a window or given away after I moved out and lost interest in the hobby .

Very convincing work on Otaki's kit, Michael. Thanks to you & Nick for sharing it with us.