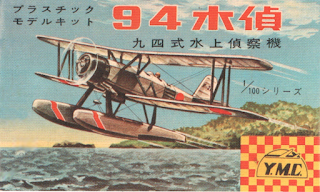 In the recent review of the Avi Models E7K1 and E7K2 kits it was stated that the E7K2 variant had not been kitted before in plastic. Wrong!  In fact a 1/100 scale injection moulded kit of the E7K2 was issued by YMC (Yamada Mokei Company) as the Type 94 水偵 (Sui tei - lit.water spy) in 1961. The kit (box art shown above) was one of a series of IJA and IJA biplane types from this manufacturer, which had begun their business with solid wooden, semi-finished aeroplane models and offered 'solid plastic' models from circa 1956. The nine kits in the series were considered advanced for their time in terms of research and technology, with the instruction sheets presenting three-view drawings by Kikuo Hashimoto. The other kits in this series, all to 1/100 scale, were as follows:- 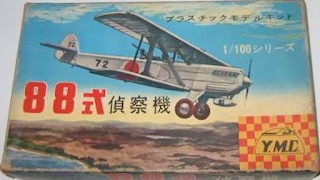 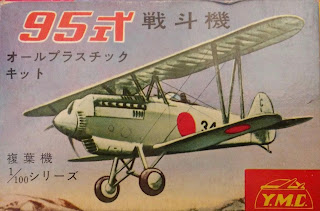 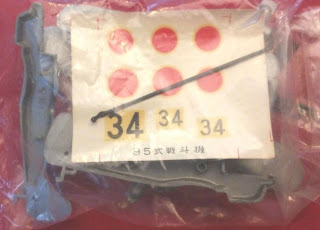 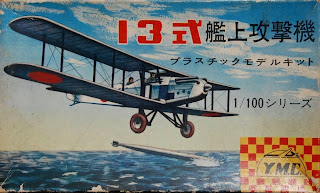 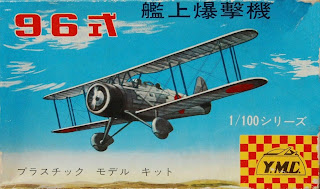 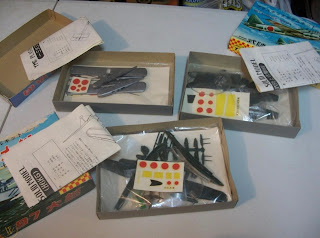 YMC also offered other kits in a variety of other 'odd' scales, mostly of then contemporary types but including a Mitsubishi G4M1 'Betty' to 1/125 scale, a K5Y1 Willow to 1/63 scale and a Kawanishi Type 97 H6K2 'Mavis' to 1/202 scale (shown below). Note the dark red keel of the hull and floats in the box art depiction. 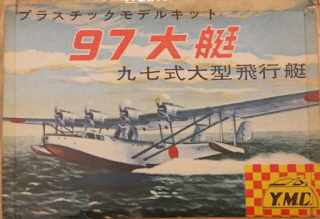 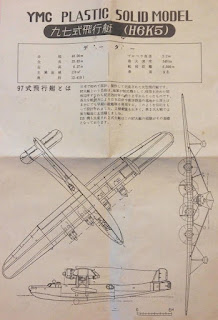 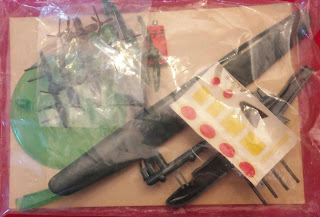 YMC's wooden kits were presented similarly to the Ki-44 shown below. A Japanese webpage about the company and illustrating some of their adverts may be found here. 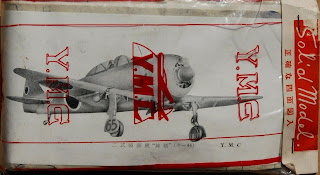 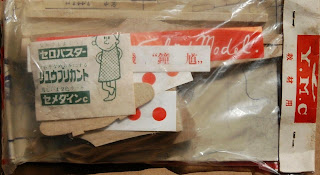 A lot of fun looking at the seasoned box art from days past. Nick, if you have access to a build of one of these or the contents from inside the box, please post.

I always wanted that Mavis kit, but the one I remember was issued by Sanwa, if I recall. I could not find that one either. The nice Trumpeter kit of Mavis in 1/144 changed that picture. Thanks for this post - the art itself is always interesting to see, remembering that it was informed, one way or another, by vivid memories belonging to the living.

Jim and Mark, thanks you for your comments.

Jim, I have added a few more images showing more box art and kit contents (via the web) but I do not have any of these kits myself and do not recall seeing any built models.

Mark, the Sanwa Mavis was to the slightly larger 1/165 scale and released in 1963. It was moulded in grey plastic but the keels for fuselage and floats were separately moulded in red! As you observe there were people around then who had actually seen the real aircraft. Early references are often forgotten or ignored! I'll send you some images of the Sanwa kit.

Having no previous knowledge of these Yamada kits, I now find myself delighted by the box-top artwork and intrigued with the company's history.

Nick, thank you for posting the additional images. Looks like, aside from wood, dark green and silver plastic was most common. Amazing that the kits are still in their original plastic bags - something I couldn't of managed until adulthood.

I have that Sanwa Mavis and can remember when I got it the surprise and delight at the red molded watery portions! Love old box art posts Nick, thank you.

Thanks for the additions on this one! One thing about many of these is that they are 'box scale' much like many Revell and Lindberg kits were. Nice to find out what those scales are. I love the Mavis box art. What a bird.

Thanks for sharing this info on YMC kits with us, Nick.