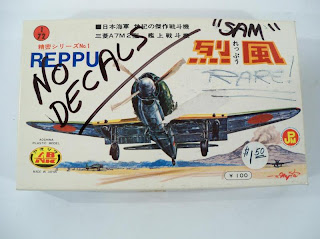 Further to the blogs on Aoshima (or Aosima) kits here and here  I came across this Reppu box art on an internet auction site. It's an early "white" one I've never seen before and appears to show bomb-armed Reppu taking off from Iwo Jima with Mount Suribachi smoking ominously in the background - or maybe it's meant to be Rabaul? It must have taken a very special kind of idiot to use the box top for the sales graffiti, including the desecrating non sequitur "Rare!" (rare it might have been but its esoteric value plunged with that unnecessary adornment). Anyone who has any of these kits in his or her collection will appreciate why the absence of decals is no big deal anyway.
It is arguable whether this sort of vandalism is on a par with those people who post collectable mint boxed kits in jiffy bags, allowing the postal services to demonstrate just how flat they can make them, or the memorable kit box I once received where the sender had sealed it all round with duct tape before putting it in the jiffy bag. The duct tape had not prevented the postal flattening process so it was a double whammy. What had been a pristine box when sold was absolutely destroyed by the time it arrived. It was then damaged even more by being soaked in tears . . .
Image credit: © Aoshima circa 1960 via unknown retailer
Posted by Straggler 脱走兵 at 10:36

Thanks for posting the box art scan. It was new to me.

Glad it was of interest. Looks like you are the only one here!

No, he is not :-)
I built this kit when current. The model is certainly showing its age now; but I keep it and all of my builds going back over 40 years.
Some may be of questionable accuracy, but they speak to me of both the state of the hobby way back when and my skills (?) as a modeler at the time.
The hobby has improved greatly; myself, perhaps a little.
My A7M2 looks even more dated now that I have placed next to it the wonderful Fine Molds A7M1, built a few months back.
Harold

A little late but thanks for showing this Aoshima Reppu boxart. That's no way to treat a nice box! But it is one more for the collection! (plus the beautiful Revell Ki45 box you showed on J-a/c -I never saw that one before!)