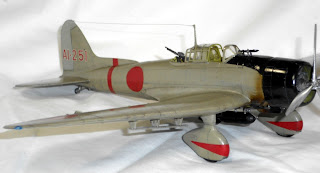 Eric Bergerud, the author of 'Fire in the Sky: Air War in the South Pacific', very kindly sent these images of his recent Hasegawa 1/48th Aichi D3A1 build. Eric wanted to depict a post-Pearl Harbor bird and mostly used Golden Fluid Acrylics for the paint job. The major components were painted ochre and neutral gray with a bit of Vallejo Model Color khaki, lightened for scale with a very light gray and tinted with about a drop of phthalo green. He found it "really tough to photograph: for every pic that reproduced the khaki-gray intended there were five that showed the fugitive green wanting to escape." This observation highlights a significant issue. The fugitive green that sometimes shows up in colour photos often contributes to stubbornly articulated perceptions of a cooler, minty grey-green or a colour approaching RAF Sky. It is important to get the constituent pigments right and they don't result in anything like Humbrol 90! 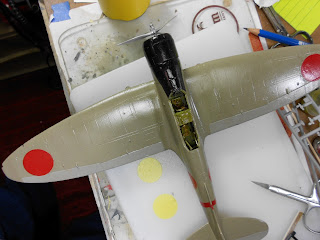 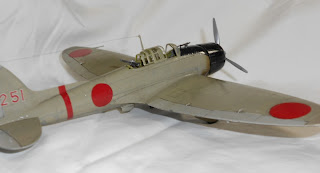 Eric's approach in mixing the colour rather than seeking something close out of the bottle or tin is to be commended as such trial and error experimentation often helps to better appreciate the characteristics and subtleties of colours. The result here is a very fine impression. 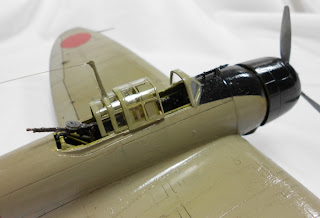 Oil stains were added around the cowl and beneath the exhaust ports on the basis that radials burned oil and Japanese radials burnt a lot of oil. Eric made all of his own markings except for the tail code. There was no attempt to duplicate a particular plane, he just wanted to depict "a grunt Val" wearing attire much simpler than found on flight or squadron leaders' planes. Eric wanted to weather the plane as it might have looked on the return from Ceylon. He did an oil paint dot filter on the entire surface but didn't use the usual washes, filters or pigments, only giving the panel lines a light pin wash with black/burnt umber oil. 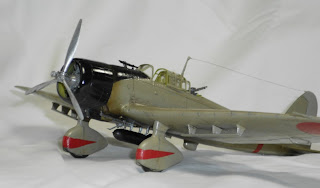 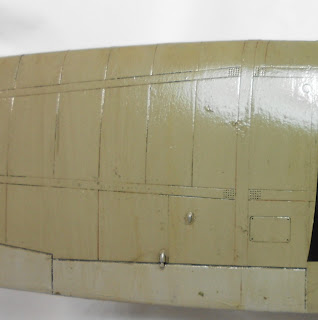 Eric observed wryly that "teaching and writing military history for 30 years (specializing in America's Asian  wars) has done nothing to help me model." 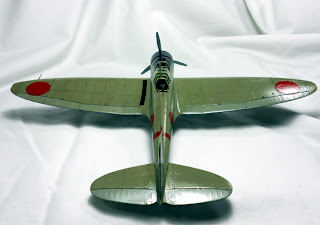 Wonderful build, Eric.
I find your your mix for the basic airframe color VERY convincing.

Great work!
Another use for Golden fluid acrylics that I must try.

Eric,
What a great build! I love your mix on the colors, and I also applaud you for trying to finish your a/c differently than the rest of the thundering herd by avoiding some finishes, but using oil paint dot filters. I'd love to know more of how you did that. I must look into these Golden Fluid Acrylics as well.
Again, a great build!