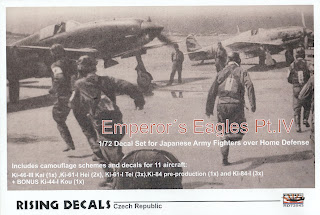 The most recent Japanese subject sheet from Rising Decals focusses on Army fighters engaged in  Homeland Defence. Emperor's Eagles Pt.IV contains markings for 11 aircraft, five Ki-61 Hien (Tony), 4 Ki-84 Hayate (Frank), a single Ki-46 and a single Ki-44 Shoki (Tojo). First on the sheet is a Ki-61-I Tei of the 55th Sentai filmed in colour at Yomitan airfield on Okinawa. The aircraft's tail emblem is applied over that of the former operators - the 56th Sentai. Again, as a purely personal observation, I think that the blue of the command chevron is printed a little too dark but the blue paint is called out as Mr Color 65 Bright Blue. Next a Ki-61-I Tei of the 56th Sentai with white Home Defence "bandages" on the fuselage but not the wings, an interesting combination with the olive green camouflage on the Ki-61 that is not often modelled. The third camouflaged Hien is another 55th Sentai bird, this time with the tail emblem applied over the diagonal stripe of the 59th Sentai. It is good to see the 59th's unique stabiliser stripes also included and with the yellow spinner and fuselage numbers this one would make a very colourful model. Two natural metal Ki-61 continue the theme of overpainted tail markings, both with the 55th Sentai emblem applied over a former emblem. Aircraft 03 also has a partially camouflaged tail and rudder. 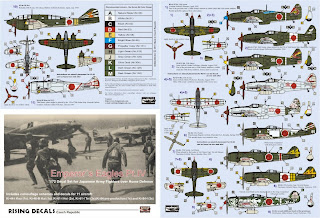 Whereas painting suggestions for the camouflaged Ki-61 provide the modeller with the choice of olive drab or dark green, the first three Ki-84 are all given as olive drab. A single 101st Sentai example with badly worn paintwork and two 47th Sentai aircraft, both said to be the mounts of Capt Tei-ichi Hatano. On the subject of the 47th Sentai a brief digression. Ki-44 Aces was criticised in Japan for describing Heikichi Yoshizawa's B-29 ramming attack as being made in a Ki-44 rather than in a Ki-84 as more generally attributed. Although Lt Yoshizawa was photographed standing in front of a Ki-84 and many accounts describe his ramming attack on 10 February 1945 as being made in a Ki-84 this type of aircraft was not used for Shinten Seikutai attacks by the 47th Sentai. The attack was made in a Ki-44. At this time the 47th were re-equipping with the Ki-84 in preparation for a completely new role as direct escort to Special Attack Units (特別攻撃隊 tokubetsu kōgeki tai or 特攻隊 tokkōtai) within the newly formed 30th Fighter Group. The Ki-84 was not intended for anti-B-29 air defence operations and after working-up preparations on the new type the unit were to be detached from the 10th Air Division in March 1945. From January to March 1945 the unit conducted operations with both types of aircraft. 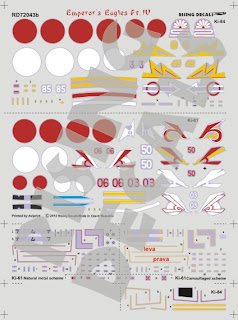 The Special Attack Units within 30th Fighter Group were the 18th, 19th, 25th, 45th and 47th Shimbu Tai. The other direct escort unit was to be the famous 244th Sentai. Reconnaisance was to be provided by the Shimoshizu Air Unit and the 17th Dokuritsu Hiko Chutai. Navigation guidance was to be provided by three bombers from the Utsonomiya Air Instruction Division and two special navigation air squads. As part of this preparation (to repel an invasion fleet off the shores of Japan) fighter units in the Homeland were re-classified into two categories as either permanently stationed air defence forces or mobile air defence forces. There were no Ki-84 units in the permanently stationed air defence forces. This type of aircraft was allocated to mobile air defence forces only with a specific role to escort special attack units in strikes against invasion shipping and to provide counter-air to enemy fighter attacks.
Back to the Rising Decals and the final Hayate is an interesting 22nd Sentai example from the second additional batch of prototypes. This aircraft is in natural metal with a dark green mottle and the distinctive 'kikusui' emblem on the tail. Although this is invariably shown as white based on a well-known post-war colour photograph I continue to believe it to have originally been applied in yellow and red with a pale blue 'river'. 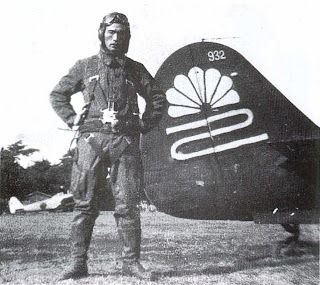 The penultimate subject on this sheet is a Ki-46-III Kai interceptor version of the Ki-46 'Dinah' (百式 三型司令部偵察機改造防空戦闘機 - Hyaku shiki san gata shireibu teisatsu-ki kaizô bôkû sentô-ki or Type 100 Model 3 Headquarters Reconnaissance Aircraft remodelled Air Defence Fighter) in markings attributed to the 38th Sentai. A most unusual and interesting choice this and a little different from the usual markings chosen for this type.

Finally a Ki-44 Shoki from the 70th Sentai, said to be the aircraft of the Sentai Commander Maj Atsuyuki Sakato in plain natural metal finish with full complement of white Home Defence 'bandages' and red and white fuselage command sash. It is possible that the sash was outlined in yellow and that this Shoki is the aircraft flown by the unit adjutant or executive officer. A small errata sheet is also included for a Shoki subject on a previously released sheet RD 72030.
This is another excellent JAAF sheet from Rising Decals with well chosen, interesting subjects, and high quality colour printing with well saturated colours, especially the Hinomaru. Thanks to Mirek for the review copy.
Image credits: © 2012 Rising Decals
Posted by Straggler 脱走兵 at 10:29

Thanks for the heads-up on this decal sheet.

Those of you with the "Setting Suns: Captured and Wrecked Japanese in WWII" by Tom Gamelin (Armor Plate Press 2007 - the first of the two volumes of that name) will find a large and clear photo of the Dinah found on this decal sheet on p. 113, and the color choices given by Rising seem the most reasonable guesses if that photo is the only one they had for reference. Hope these will show up for 1/48 scale as well.

Thanks to Rising Decals for offering more than the same old choices for modeling Japanese aircraft. And I wouldn't hear much about them here in the US if not for this site.

I'm currently in process of building 1/48 Hayate . I chose 932 of 22-nd sentai (it's the one on photo in this article) as my prototype. Would you be so kind to tell : if flap wells and flaps inner surfaces on this plane could be painted aotake or were unpainted? And the same question is for wheel wells and for engine cowling inner surface.

A thorny question, beset by conflicting views and a lot of modelling convention!

932 was an early production Ki-84 (second batch supplementary prototype) flown by 1Lt Shiro Funahashi at Fussa in April 1944 and is sometimes depicted as being factory painted in # 7 olive brown (with painted undersurfaces!). At this time it is more likely to have been a natural metal finish aircraft with the top surfaces only possibly painted in dark green # 27 or olive green # 21.

Some very early production aircraft had the undercarriage wells painted in a dark (possibly grey) primer but later aircraft had natural metal finish wells with only the reinforcing strips on the small inner doors in a dark primer (or possibly aotake). Another photograph of 932 appears to show the latter. Some late production aircraft (with painted undersurfaces) reverted to dark painted wells, possibly in the # 7 top surface colour although some Japanese modellers represent the wells of these aircraft in natural metal or the undersurface creamy grey.

Hayate c/n 2389 (Ohta May 1945) appears to have had the wing gun bays left in natural metal but it is worth noting that c/n 1446 (Ohta November 1944) had the upper surfaces of the flaps thinly painted over in # 7. There is a possibility that in the late summer and early autumn of 1944 as the Philippines was reinforced some Hayate were hastily painted with # 7 on the upper surfaces to conform to the new directive whilst retaining natural metal finish undersurfaces.

The insides of the cowling - if painted - were usually a very dark grey or black paint although on c/n 1162 there is evidence of the same grey-green paint found in the cockpit - approx similar to FS 34266.

So, the suggestion for 932 is natural metal for undercarriage wells and flaps.

Nick, Thank You very much!

This info sure would help me a lot.

I'm not very fast model-buider, but as soon as my Hayate is done I would be glad to send You some photos of the result.

Glad it was helpful. Looking forward to seeing your Hayate - always welcome here!