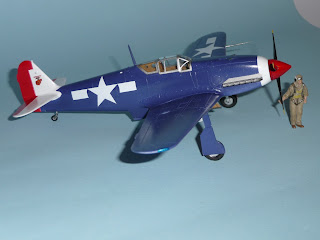 John Coverley very kindly sent me these images of some of his Japanese aircraft models. The USMC captured and flown Ki-61 above is from the 1/48th Hasegawa kit which John built after reading about it in 'Aeroplane' magazine. 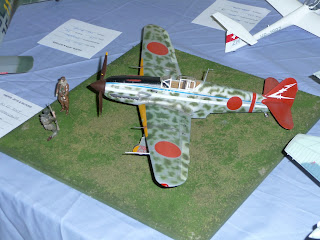 The 244th Sentai Ki-61 was built last year from the Hasegawa 1/32nd scale kit. An Eduard exterior etched set was used on the model and John tried using alclad laquers for the first time, also using a double-action airbrush for the first time. Mr Color laquer was used for the propeller and the Hinomaru were painted on as were the yellow IFF wing leading edge markings. 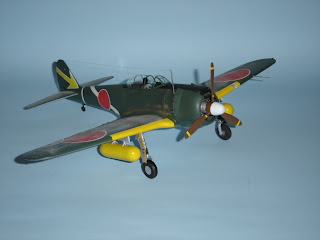 The 64th Sentai Ki-43 Hayabusa is also a Hasegawa 1/32nd scale kit. John added a few Eduard etched details such as seat belts and undercarriage doors, but otherwise it was built OOB. The paint used was Tamiya acrylic with decals as provided in the kit. 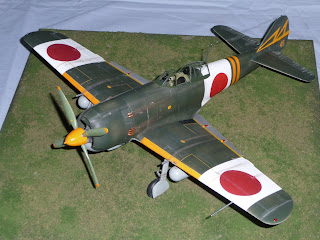 This Ki-84 Hayate was built about a year after the Ki-43, also from a Hasegawa 1/32nd scale kit. Again John added some Eduard parts and painted the model with a mixture of Mr Color, Lifecolor and Tamiya acrylics. The yellow fuselage bands and white Homeland Defence "bandages" were painted. John was inspired to try his hand at these Japanese aircraft by seeing other peoples models and hopes that these images will encourage others to have a go at something different.
Image credits: © 2012 John Coverley
Posted by Straggler 脱走兵 at 08:37

Excellent job on these, John.
I have seen a photo of the USMC Hien; but never a model of it.
Striking!

Beautifully done, John. First time I've seen the Tony modeled in those markings. Looks great, as do they all.