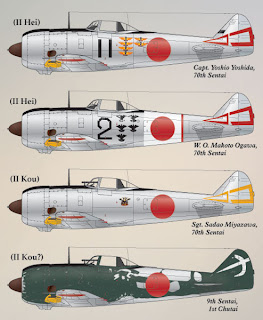 Lifelike Decals second set of Ki-44 Shoki markings in 1/48th scale includes two well-known machines from the 70th Sentai which have been depicted and modelled incorrectly for years. The elaborate victory adorned aircraft of Capt Yoshio Yoshida and WO Makoto Ogawa are usually shown with yellow Sentai tail markings, but Lifelike's new sheet provides the correct red markings (but for one aircraft only). Thanks to Lifelike's owner these markings were also able to be depicted correctly in Osprey's Ki-44 Aces. Again the narrative captions are comprehensive about this and also tackle the thorny question of the position of Ogawa's sixth victory marking. The B-29 victory markings, often crudely represented in previous sheets and kits, are especially well done. The fin leading edge flash on Yoshida's aircraft is shown as black with good cause whereas in Ki-44 Aces we depicted it as red. 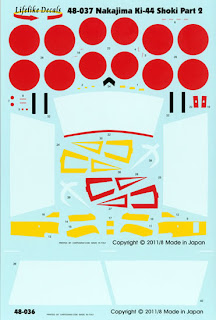 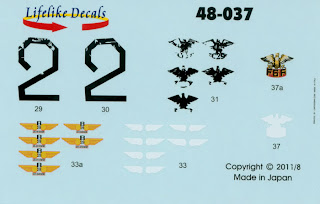 The third subject on the sheet is a less well-known 70th Sentai Shoki, as flown by Sgt Sadao Miyazawa with a victory tally commemorating his successful combat with a Hellcat on 17th February 1945. The colour of the tail marking is unknown but Lifelike provide a yellow option. The fourth and final option is for a heavily weathered 9th Sentai Shoki in China. The sheet includes white Homeland Defence "bandages" but again stencilling and yellow IFF strips are provided for only one aircraft. This is another excellent sheet for Ki-44 enthusiasts. 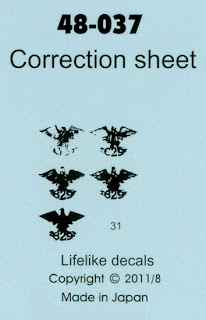 After mentioning both the Arii (ex-Otaki) Ki-44 and the colourful 246th Sentai machine included in Lifelike Decals first sheet in yesterday's blog, Mark Smith very fortuitously and kindly sent me some photos of his "old" Otaki Ki-44 model displaying the very same markings from the same convincing interpretation of colours. Not only do they make for a very striking model but the photos illustrate just how this "old" kit still shapes up well, no doubt due in no small part to Mark's skill and expertise. Thanks Mark! For those with the Arii or Otaki kit in the stash the Lifelike Decals offer the opportunity to dress her up very nicely. 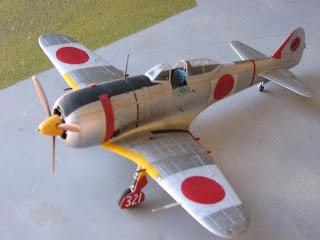 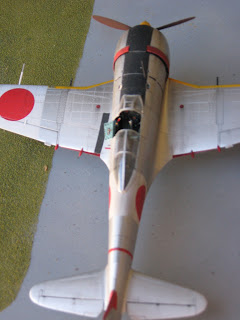 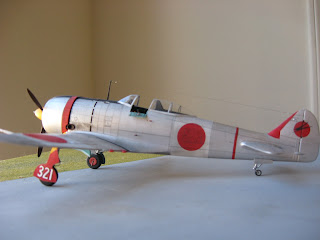 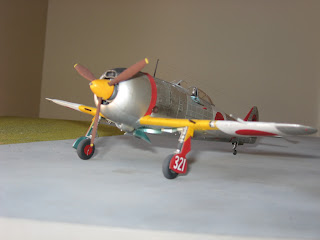 Mmm, yes; we DO rather need these in 1/72nd!
Great work by Mark; I don't recall seeing those markings before. The yellow spinner, red cowl flaps and gear doors make for a striking look to the a/c.

I hope LifeLike will release this set in 72nd also and printed by Cartograf too. Will buy few of them :)

Thanks Nick, for posting notices of the three Lifelike Tojo decal sheets.