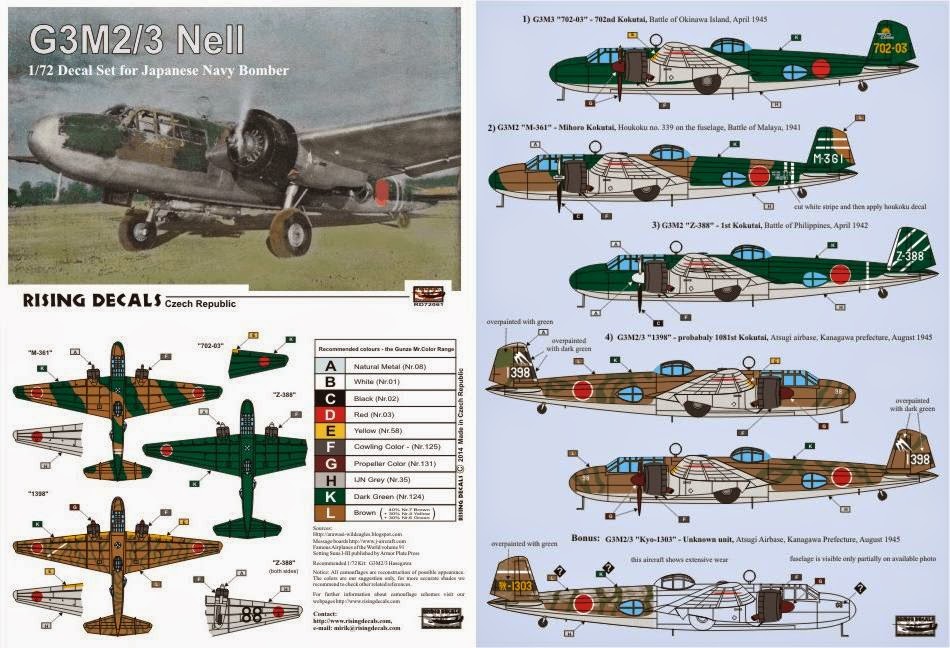 The prolific Rising Decals have issued further sets of interest to Japanese aviation enthusiasts, both as decals and resin accessory parts. 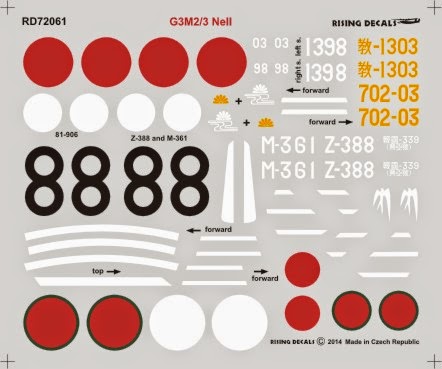 First up is 1/72nd decal set RD72061 for the Mitsubishi G3M2/3 'Nell' (Kyu-Roku Shiki Rikujoh Kohgeki-ki - 九六式陸上攻撃機 - 96 Type Land-based Attack Aircraft, abbreviated to '96 Rikko' -九六陸攻) designed for the Hasegawa kit but probably good for the older LS/Arii kit notwithstanding controversy over scale. This impressive set includes the markings for four aircraft plus 'bonus' markings for a fifth example the full appearance of which is unknown. The subjects provided are:-


The brown colour in these schemes is suggested to be mixed using GSI Creos ('Gunze') primary paints in the ratio 40% # 7 Brown + 30% # 4 Yellow + 30% # 6 Green. I haven't tried this mix but presume it comes from Hasegawa instruction sheets. The vexing subject of IJN browns was covered here, here, here, here, here, here and here (!) in the early days of this blog and probably warrants re-visiting and consolidation into something more, er, user friendly. 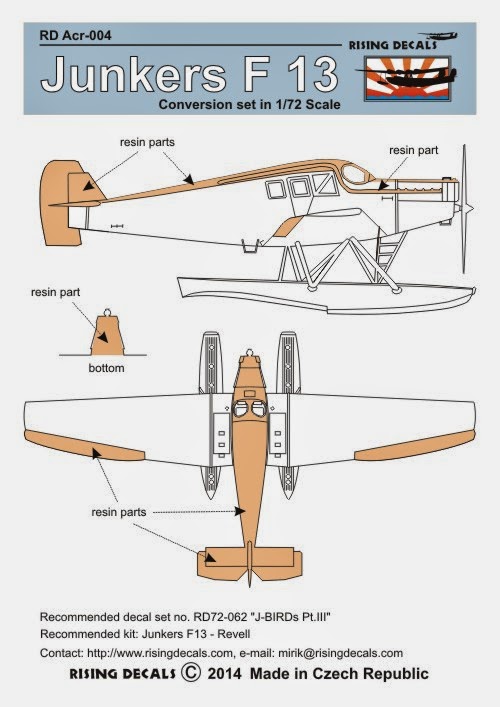 RD Acr-004 is an extensive resin set designed to convert the 1/72 Revell kit of the Junkers F-13 into the Nippon Koku Yuso Kenkyujo (NKYK - Japan Air Transport Research Association) floatplane J-BAZG which was featured in Rising's RD-72-062 J-Birds Pt.III. NKYK was founded in June 1922 by Mr Choichi Inouye of the Itoh Flying School. It was based on the beach in the Osaka suburb of Sakai and initially operated 10 Yokosho floatplanes bought from the Japanese Navy, providing passenger services to Tokushima in Honshu and to coastal resort towns on Shikoku and Kyushu. In January 1928 NKYK introduced two Junkers F-13's for the coastal routes. However, according to the Japanese Civil Register J-BAZG was operated at Sakai by the Teikoku Kaibo Gikai (Imperial Maritime Defence Volunteer Association) and the Junkers aircraft operated by NKYK are listed as J-BBEO and J-BBGO. 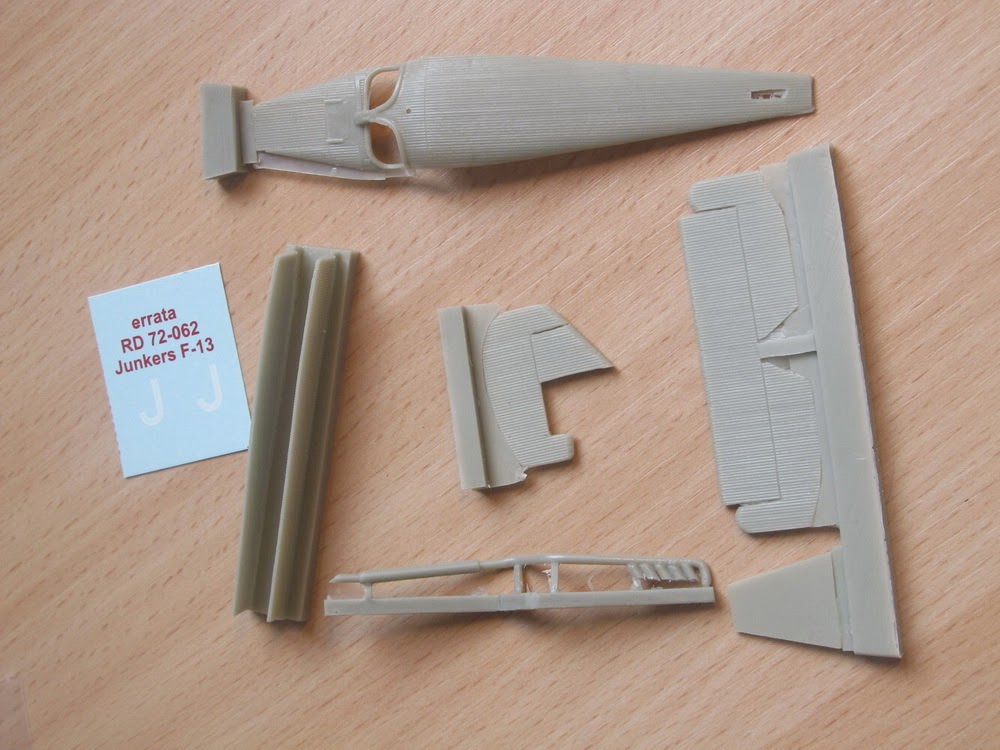 The conversion parts are finely moulded in a grey-green resin and consist of a new upper fuselage, lower cowling, exhaust stack, ailerons and complete tail unit, together with an errata decal sheet of two white 'J's for the tailplanes. A striking model should ensue. 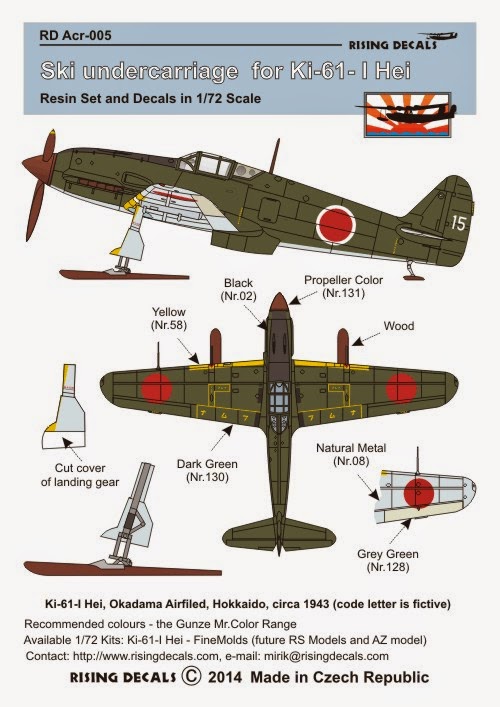 Next are two sets very much for the Tony enthusiast who already has everything. RD Acr-005 and RD Acr-009 provide resin ski undercarriages in 1/72nd scale for a dark green Ki-61-I Hei with white tail number '15' and natural metal Ki-61-I Otsu with red tail number '19' respectively, both at airfields in Hokkaido circa 1943. Each set comes with a small decal sheet of Hinomaru and the tail numbers. 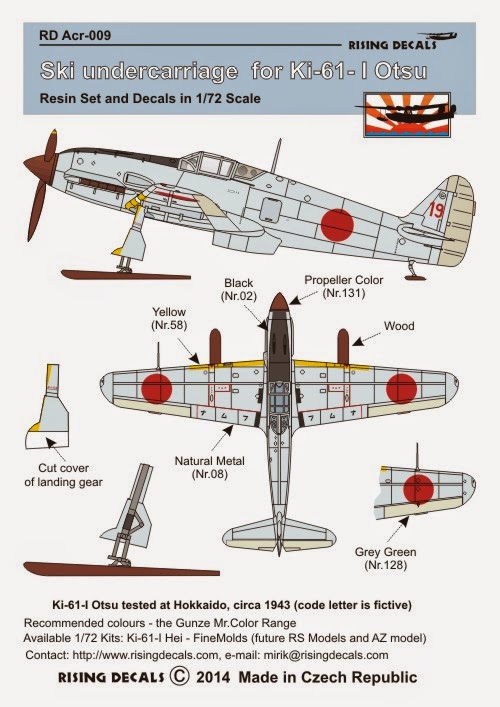 These sets are designed to be used with the excellent Fine Molds kits or the announced but not yet released RS and AZ Models kits. The old Hasegawa kit, still re-appearing from time to time with new decals, represents a Tei and the Dragon kit, which was explored here and here, is something of a hybrid. Still, if you happen to have it in the stash it is not nearly so bad as some people make out. 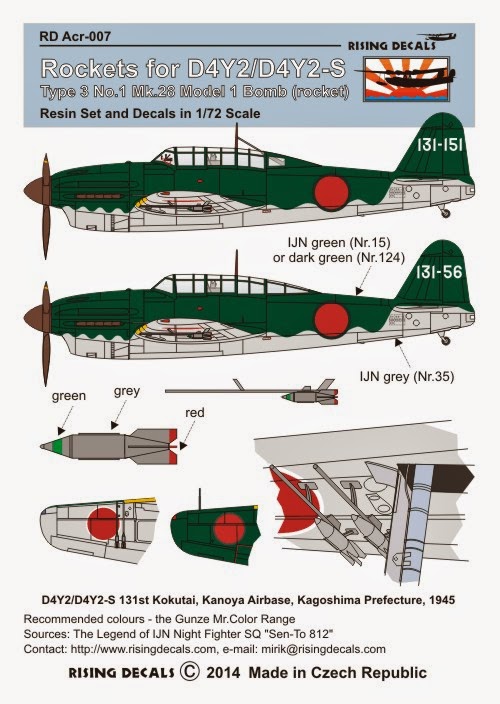 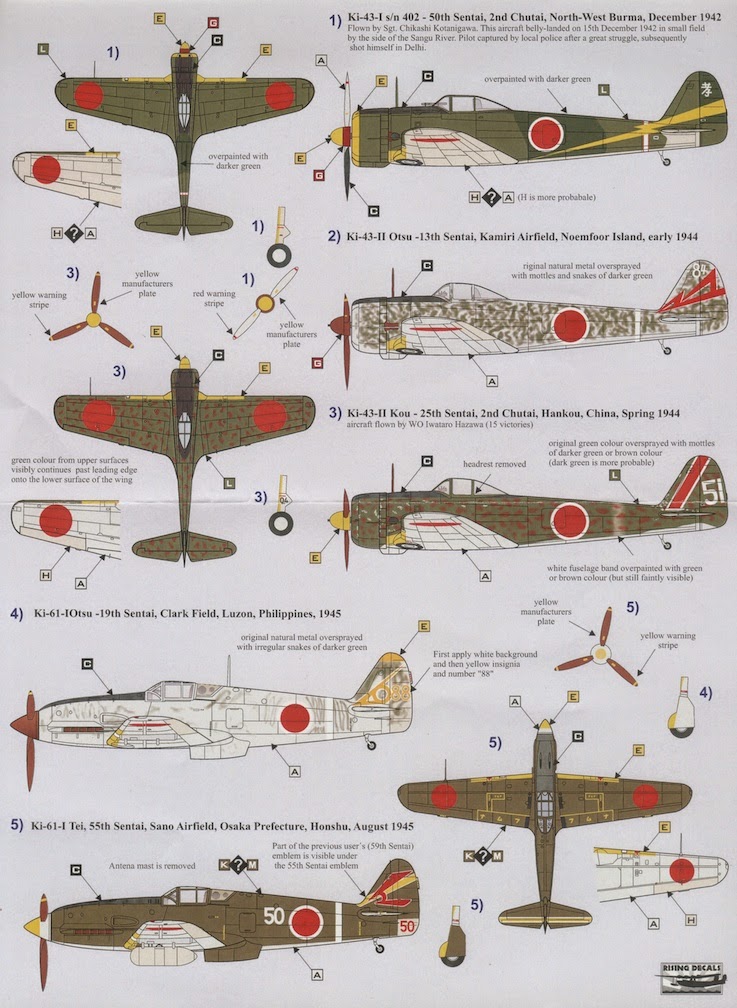 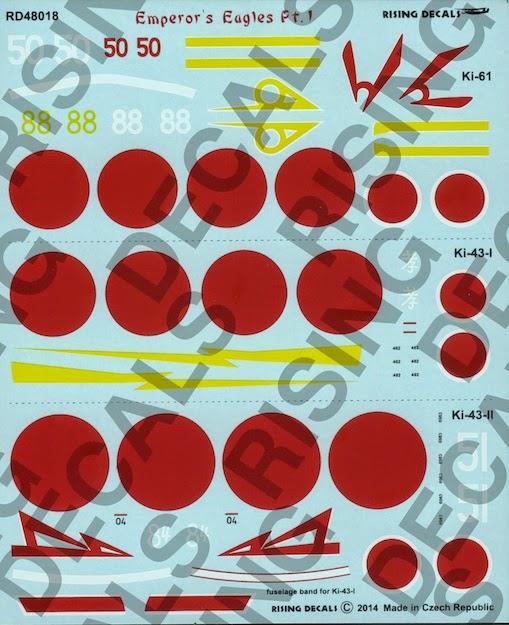 Hinomaru for one Ki-43-I, one KI-43-II and one Ki-61 are included. Although the decal sheet follows a common convention in identifying the Oscar II subjects as Ko and  'Otsu late', etc., this is not an official designation but rather an anachronistic one of modern convenience. The Ko, Otsu, etc., suffix designations, sometimes rendered as a, b, c, etc., in English sources, were usually used by IJAAF to denote armament variations in fighters which do not apply to the Ki-43-II as it carried an identical armament of 2 x Ho-103 12.7mm machine-cannon throughout its service. The detail differences in the II series were production changes to the airframe and engine and in Japanese references these sub-types are often divided by features into early, mid and late production types with the II Kai as a final type, all using the word ki (期) which means period but is sometimes given as 'production' in English. Thus:-

Only the main features of each sub-type are remarked above but not all the additional detail changes. There are actually four distinctively identifiable versions of Ki-43-II prior to II Kai with one researcher referencing designations of Ki-43-IIa early, Ki-43-IIa  late, Ki-43-IIb early and Ki-43-IIb late. This divides the mid-production into IIa late and IIb early. The official IJAAF table of aircraft designations makes no such distinctions, just referring to Ki-43-II and listing the differences simply as production changes but unfortunately does not date them precisely or provide the serial numbers for first change. Many references, even Japanese, incorrectly attribute the shortened wingspan from the first introduction of the II series, whereas the first production II retained the long wingspan of the I. Digression over! 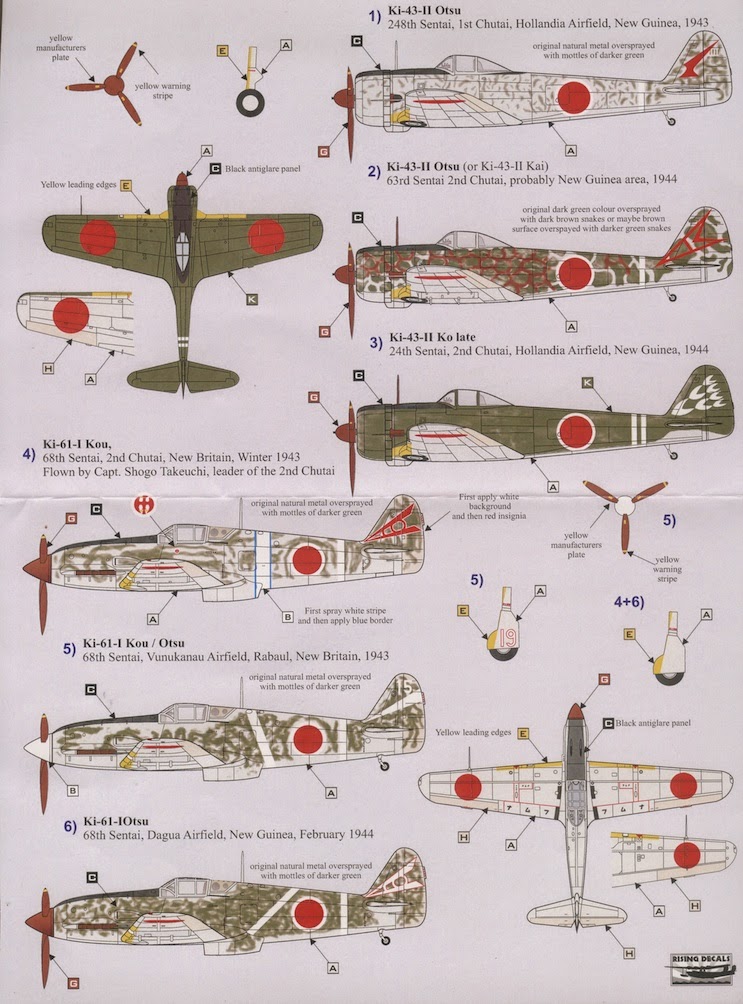 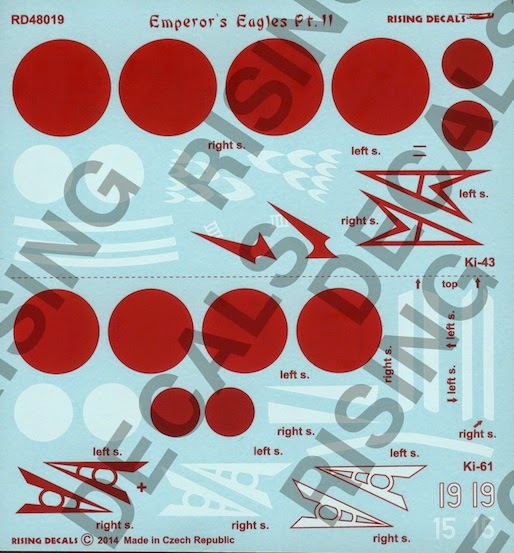 Hinomaru for one Ki-43-II and one Ki-61 are included. Although not apparent from the scans here the yellow is the correct deeply saturated colour and not the lemon yellow printed on some decal sheets. As well as providing suitable alternative schemes for Hasegawa or Fine Molds kits both sheets offer excellent and useful decals to dress up older kits such as the Otaki/Arii Ki-43 and Ki-61 and are highly recommended. Special thanks to Mirek of Rising Decals for kindly providing samples of these new products.

Wow! What a haul of goodies and what great choices. And it's a good idea to get what you want of this bunch as their production runs / windows can often be short. I think this company and Life-Like generally make the best decals for Japanese subjects. Do you have any info on the civil use of the Junkers, Nick?

And thanks for the rundown as far as the Hayabusa production differences. TAIC would certainly have liked a glance at that! Imagine how confusing they found the subject with several gaps unfilled by artifacts, when modelers all these years later are still struggling to understand it. For such a common aircraft that fought from first to last, we still don't have anything solid about the development of the cockpit layout either. The only clear period photos I've seen were of a captured airplane with some American equipment - and that was a Ki-43-if I remember correctly. Have you ever seen photos of the cockpit of "The Raccoon Special" or the other -II Oscar that TAIC cobbled together? I keep thinking there must be many more photos TAIC personnel took that haven't seen publication yet. The old Maru Mechanic and the Aero Detail volume on Ki-43 both have drawings showing cowling development that might match - generally - your description here. Thanks Nick, very interesting post - Mark

I have added a little more information about the Junkers F-13 to the blog.

Thank you very much for the information, Nick, in particular the Ki-43 production differences and denominations. Very interesting also the alternate scheme for the 248th Sentai since I have the 1/72 version of the decal and didn't include it.

The short runs of Rising Decals sheets are frustrating. That is all. -Peter Lloyd