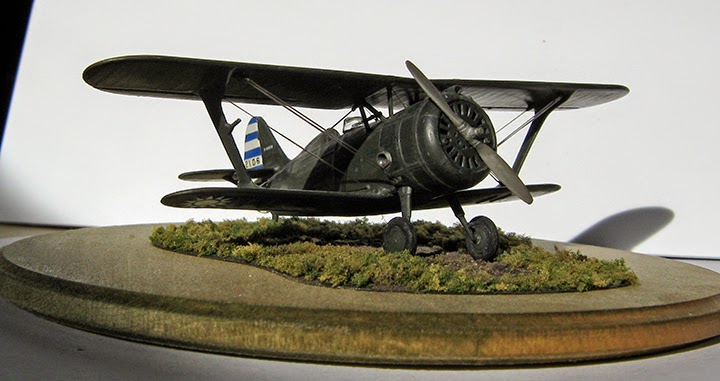 It is always a delight to be able to feature a Chinese aviation subject at this blog and 'Old Man' has very kindly given permission to showcase these images of his convincing build of the new tool ICM 1/72nd Polikarpov I-15bis, as well as providing detailed and useful notes about the project for anyone contemplating making this kit. The I-15bis formed the bulk of Soviet supplied aircraft to Nationalist China, with no less than 389 provided from 1938 onwards. By November 1941 there were still at least 20 in Chinese service within four operational squadrons and two training units, the Soviet biplane surviving into 1942. In his own words then:-

"If you want a model of a Polikarpov I-15bis in 1/72, ICM is the only game in town. This is their current offering ('new tool'); an earlier 'old tool' version can still be had second hand, and is not a bad kit itself, though the 'new tool' is superior. I have built both. 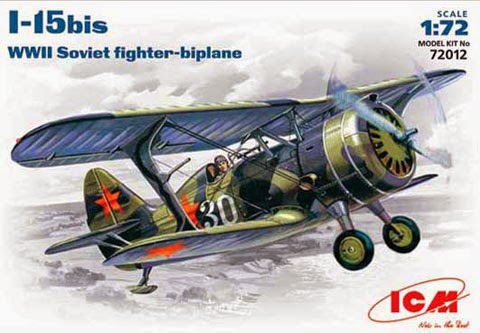 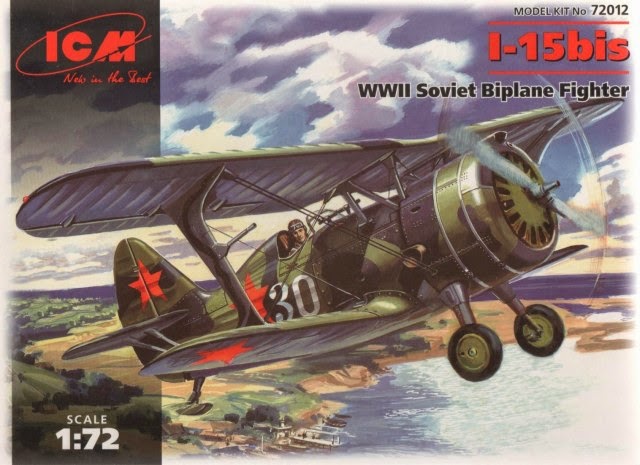 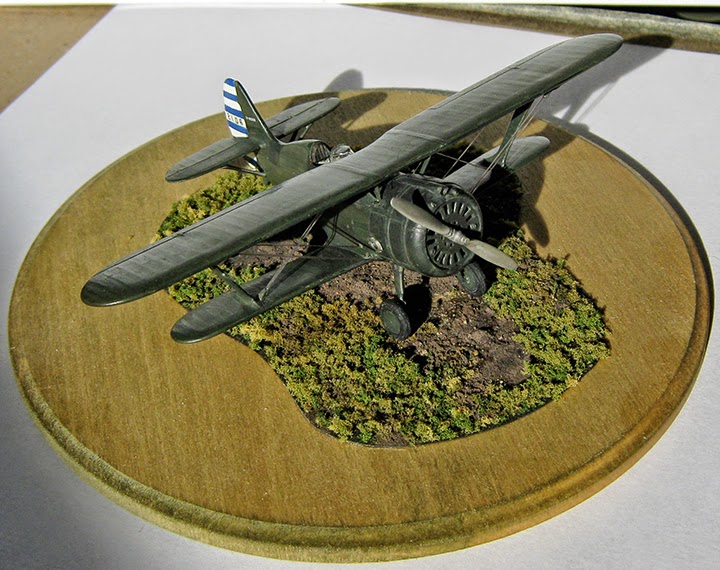 "I assembled the lower wing to the upper wing by the interplane struts, and then attached this as a unit to the fuselage. This makes it easier to do the seam-work where the interplanes mate to fairings moulded on the wings. Careful (and patient) test-fitting of the mating surfaces of the lower wing to the fuselage can get you an excellent joint at the wing-roots, and a good fit at the belly; this should be done with the fuselage halves held together tightly.

"The kit provided accurate interior detail (the old one, not so much), but the structural frame-work provided is very fragile, and you you will be better off using it as a model to prepare your own pieces out of plastic rod, or wire of 0.5mm diameter. Attach the MG breeches to the fuselage sides and not to the floor piece. The barrels should touch the 'ear' pieces intended to anchor the fuselage frames in front. To get the instrument panel to fit properly, you will have to sand away the upper outer corners of the MG breech backs on the piece. Set the seat well back in the floor piece; its upper portion should fit in the headrest opening. The floor and seat assembly can be added/adjusted through the gap where the lower wing goes. 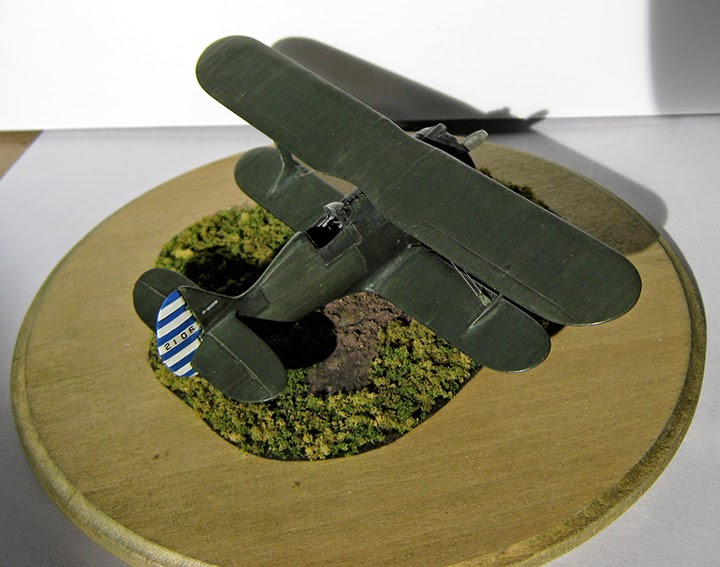 "In assembling the nose, I left out the engine and associated bits. They do not fit, will not be seen, and do not really help in attaching the cowling. Assemble the cowling pieces (top, sides, and bottom) to the front ring piece. Cut a circle of thin sheet (I used 15 thou) to match the interior diameter of the cowling, and seat it against the step provided inside by the ring piece. Paint it black in front and put on the face plate. Next, cut a square or circle equal or a bit larger than the diameter of the open nose of the fuselage; one thick piece or a couple of thinner ones, it should be a bit over 1mm thick total. Glue this either to the nose, or to the back of your blanking plate in the cowling (paint the thing black or you might see white through the cockpit opening). Doing this will provide a solid seating for the cowling, at an appropriate position, with rear edges clear of the fuselage. The large and small pipes will settle into grooves provided in the fuselage pieces. In finishing the exterior of the cowling (before attaching it to the fuselage, obviously) do not bother trying to preserve the surface detail. Sand it smooth and replace with striping tape or strips of foil tape or even decal film. Note that the rear of the cowling overlaps the forward cabane legs, and is notched for this; these notches did not fit my cabanes, and I had to fill them, and put new notches in, a bit nearer the center-line on each side.

"Color was mixed from PollyScale paints - 3 parts British Dark Green, 2 parts RLM 81 Brown Violet and 1 part IJA Light Grey. PollyScale is not made anymore now that Testor's bought them out, but the colors are still available in their Model Master acrylic line and seem about the same - the IJA grey as 'light blue grey'. Once the base color was applied, I lightened it a little with a pale buff and went over fabric surfaces, and darkened it a little with black, and went over metal surfaces. I then applied several washes of the brown-violet and of olive drab, wiping or blotting them shortly after application, and then going over the surface with a 3000 grit polishing pad before the next was applied. I dilute my paints with Future, which eliminates brush-strokes, and toughens the paint up a bit to boot, and generally apply over a white primer coat. Coverage takes two or three coats, and each gets the polishing pad treatment.

"The 'brown violet' is an odd tone, close to burnt sienna. Something pretty similar to it can be got by mixing black into the reddish browns sold as 'leather' and such. I suppose the gist of the mix is adding some red and black and white to a slightly olive dark green, in the forest green or hooker's green family. 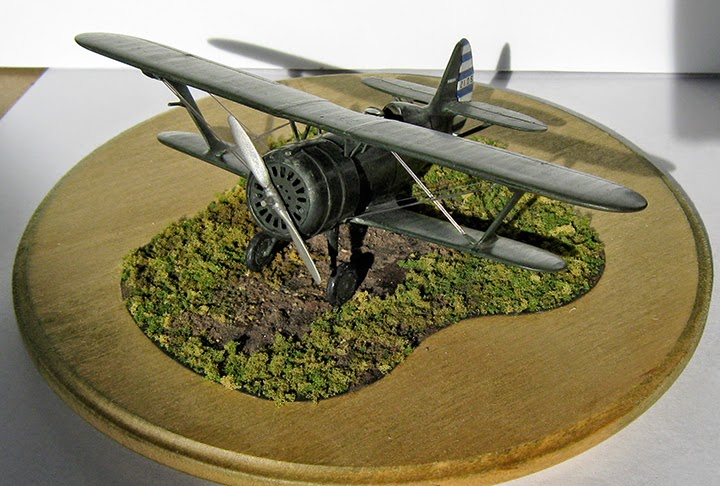 "The model is intended to represent a late service machine of the 21st Pursuit Squadron at Chungking, in the '39/'40 period. My understanding is that while these were supplied in Soviet colors, refurbished or overhauled machines emerged to Chinese standard. At the start the Chinese marked squadron number and individual number very large in white on the fuselage, but over time this prominent marking tended to dwindle, and the 21st put it identity indication very small on the rudder. Decals on this are an improvisation. I started out using markings from an old ICM I-15bis kit, but once on they looked too pale. Wife made some darker blue suns which I applied over the original decals, and a swatch of the same blue, which I cut strips from and applied on the rudder. The ID number is dry-transfer applied to clear film, and then sealed and applied. The white serial indication is pirated from an Airfix P-40b; it is not accurate of course but is too small to read in the scale anyway, which is accurate. I have since acquired a Bestfong decal sheet with many markings for Chinese Polikarpovs of all types, and this includes some runs of the tiny serial numbers in white. I am looking forward to using it, especially now that ICM has put out a kit of the I-153."

With thanks to 'Old Man' for images and description.

A great little build article Nick, thanks so much for posting!