A Gaggle of Old Jacks and Random Thoughts ~ Part Three 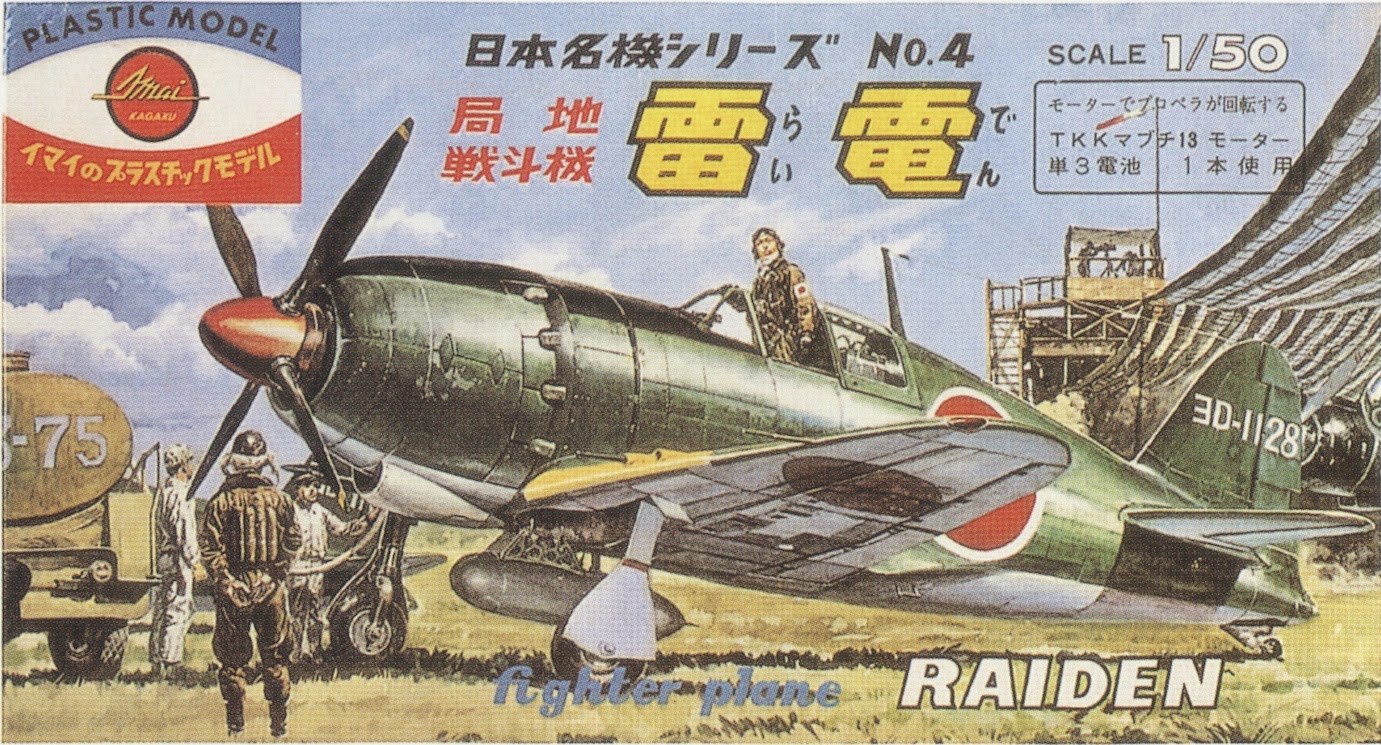 Better late than never, they say. Even so it was a shock to discover that Parts One and Two (updated) of this brief kitography of the Sammo Hung of Japanese fighters were penned in 2011 and not "last year" as my self-delusion was fondly reassuring me. Time flies. In this episode I have deliberately avoided navigating the plethora of Hasegawa 1/48th Raiden kit issues on the grounds that to sprue-fondlers of a certain vintage they are not really 'Old Jacks'.

I've never had the chance to examine the Imai Raiden issued to 1/50th scale in 1964 but the box art (above) is splendid. The work of Yoshiyuki Takani, perhaps best known for his early Tamiya box art of complete battle scenes with Tiger tanks and desperate looking last ditch groups of Wehrmacht soldiery - that sort of thing. But he was versatile and also painted the art on the big scale Doyusha fighters, some early Fujimi art and even the art for a few of the Airfix-Eidai issues as well as the more recent robotic transforming stuff. Very expert at breathing life into the human form and in the composition of men and machines. This one was unusual and evocative in having the Raiden grounded with its pilot gazing up at the sky in anticipation of combat. Whether he is watching in admiration as another Raiden is put through its paces or in frustration at the contrails of incoming B-29s as his aircraft is re-fuelled we shall never know, but there is no sense of urgency in the picture.

As well as their 1/50th scale aircraft range Imai originated a range of 1/144th scale Japanese twins that were subsequently re-released by Hasegawa. The company went out of business in the early 1980s and their larger scale kits are little known and seldom seen now. 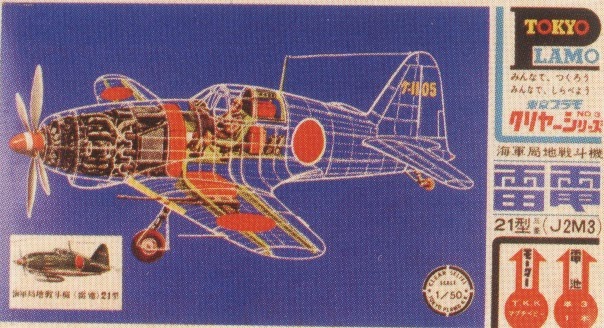 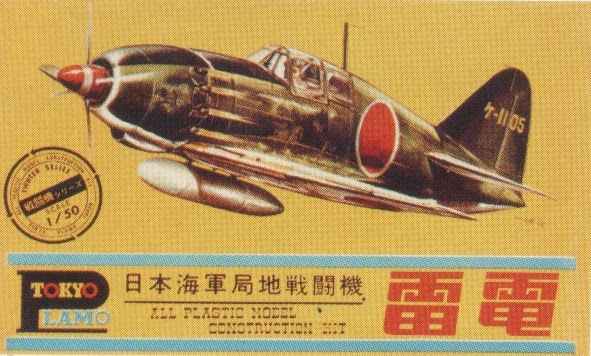 Sanwa/Tokyo Plamo also released two Raiden kits to 1/50th scale (above), one of them being a 'visible' with the airframe in transparent plastic to show internal details such as engine, cockpit, guns, etc. That kit seems to be extremely rare and I have never seen or examined one. 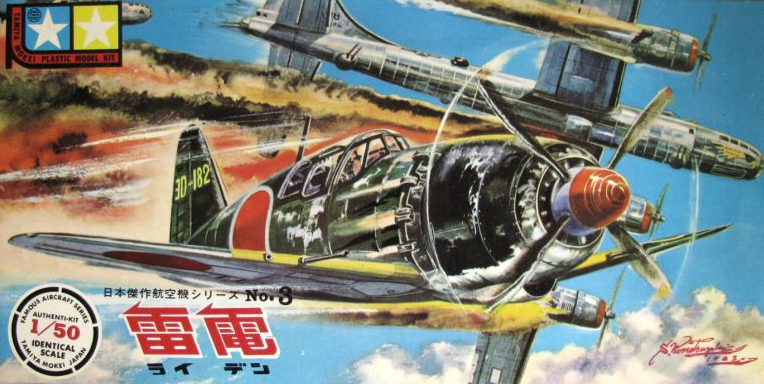 In 1964 Tamiya issued a Raiden in 1/50th scale as kit # 3 (above) with identical box art to their 1/72nd version, depicting a fighter of the 302nd Ku streaking past a crippled B-29. A second Raiden kit, this time to 1/48th scale, was issued in 1973. Burns* lists these as the same kit but I don't think that is the case. The Tamiya Raiden has endured in their range to the present day and become something of a classic with box art for the standard edition that has also remained the same. 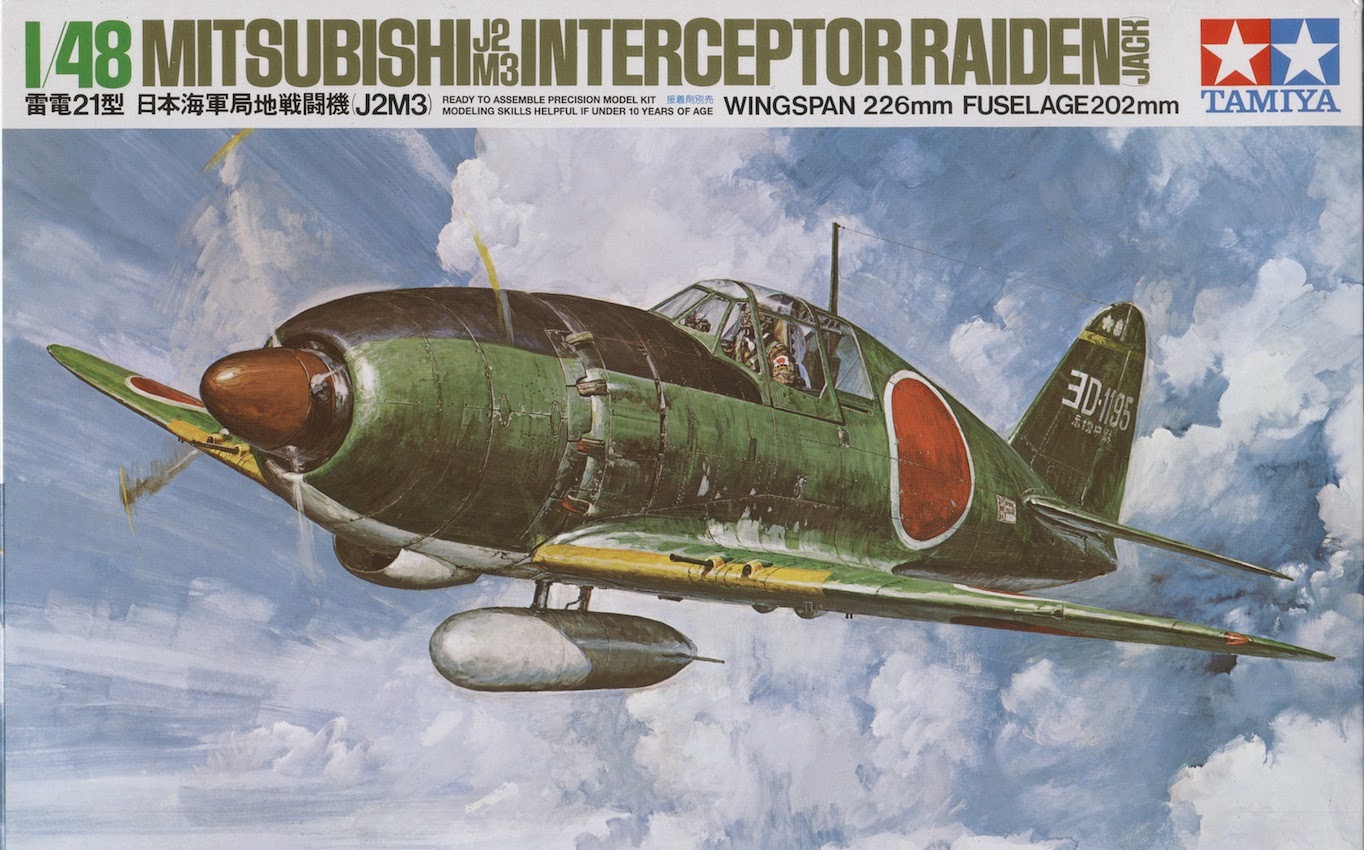 That depicts Lt j.g. Sadaaki Akamatsu's Raiden of the 302nd Ku scudding peacefully alone through a cloudy sky, perhaps in response to the proto-Mumsnet programme of feminisation that had persuaded manufacturers to remove all hint of war from their boxes. The kit came with a sheet of two colour profiles by Rikyu Watanabe and markings for three examples:- ヨD-1195 the subject of the box art, ケ-1105 of the Genzan Ku and 352-37 a  lightning bolt emblazoned Raiden of the 352nd Ku at Kanoya in April 1945 identified as flown by Lt j.g. Yoshihiro Aoki. The linear presentation of the code and individual aircraft number '37' was consistent with pictorial presentations at that time, for example the K Hashimoto profile in the 1973 Famous Aircraft of the  World (FAOW) monograph on the type, and it was repeated in the Maru Mechanic book of 1977. The 1985 re-print of the FAOW title included a profile by Shigeru Nohara displaying the correct '3' over '52' presentation with individual aircraft number '20' that was subsequently confirmed by photographs. 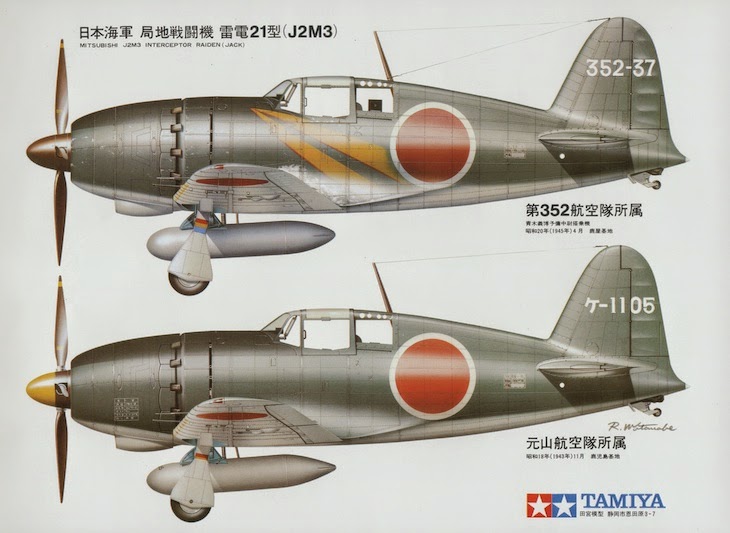 A  motorised version of the kit with new box art was released in 2001 (below), this time featuring 352-20. But curiously whilst this showed the correct tail code of 352-20 with the '3' over the '52', the incorrect code and presentation in the original kit has never been corrected. 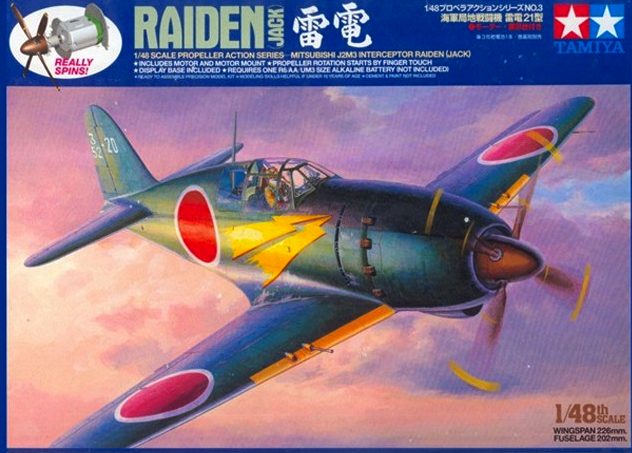 The kit is cleanly moulded and of straightforward construction with 48 parts including a one piece canopy and standing pilot figure. The current issue is moulded in pale grey plastic with fine raised panel lines but I cannot now remember whether the first issues were the same or moulded in dark green. There is no engine as this is hidden behind the forced cooling fan which is moulded integrally with the forward cowling. I hardly dare mention the interior as being adequate this time, but it consists of a floor with integral side consoles, a rear bulkhead with additional parts, a seat, separate control stick, instrument panel and separate transparent armoured glass panel. The instrument panel is plain with two decals to  represent the instruments. The radio equipment on the shelf behind the rollover frame is moulded integrally with the  fuselage halves - perhaps one of the weakest aspects of the kit. The fuselage sidewalls have some basic rib detail and the wheel wells are boxed in and detailed. Expectations about interior detail have moved on but for its time this was wondrous. Current price direct from Japan is around £7. It is still an excellent kit for escaping modellers block, trying out painting techniques - or even for a bit of home made super detailing. 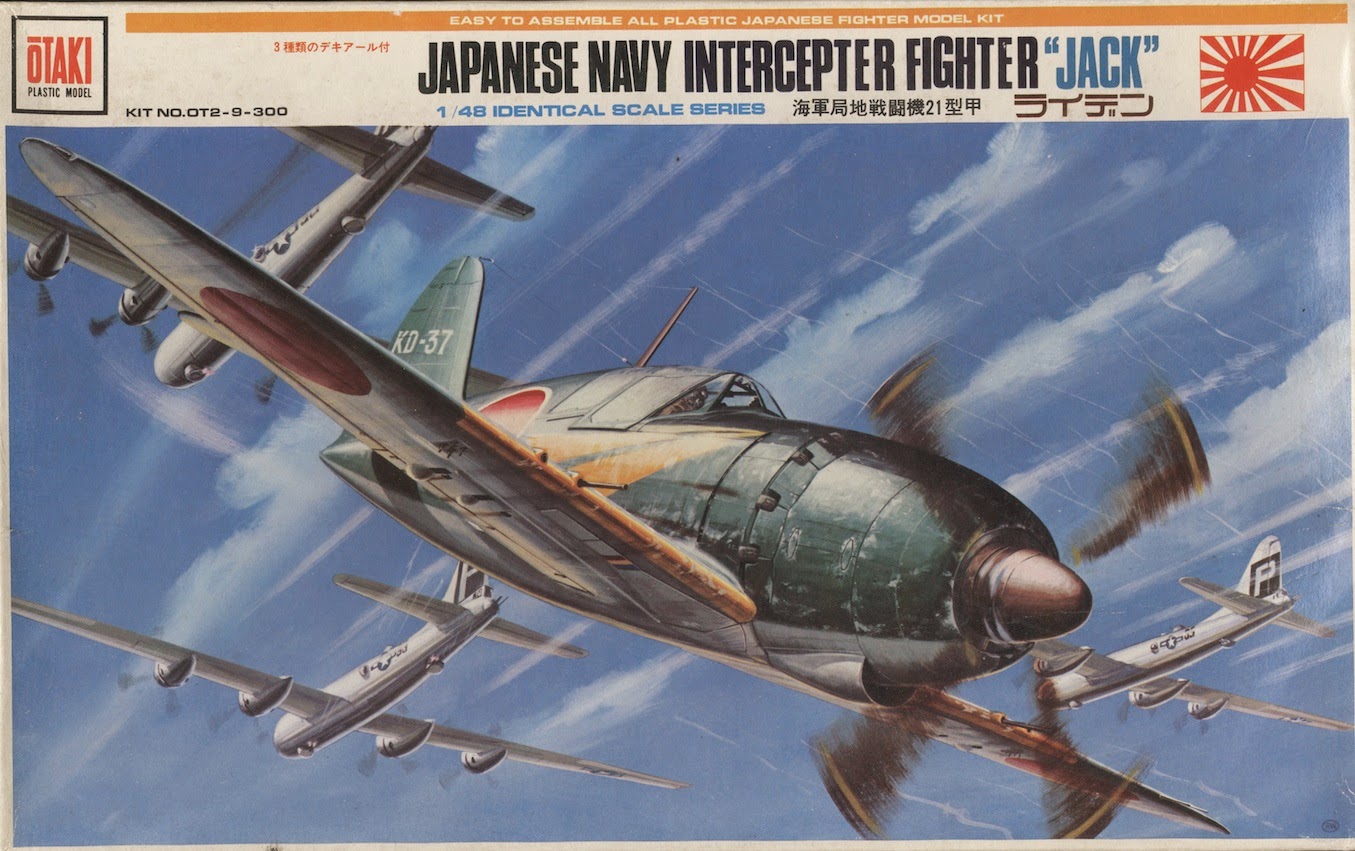 The Otaki Raiden in 1/48th scale was released as OT 2-9 in the mid 1970s but is also still available in the Arii Microace series for less than £4 direct from Japan. This is a bargain because the finished model captures the pugnacious stance of the aircraft very well. The Tamiya and Otaki kits as built can be compared here. The first issue box art showed a  lightning bolt adorned Raiden with the odd tail code KD-37 diving down through a formation of B-29s. It was moulded in dark green plastic and included engine parts. The surface finish is typical Otaki with a proliferation of engraved rivets  and engraved panel lines but finely rendered. As well as 'KD-37' optional markings were provided for 32-101 flown by NAP 1/C Akashi Ochi of the 332nd Ku which operated the Raiden in Homeland air defence duties from Naruo and Kanoya and ヨD-1195. Ochi claimed the unit's first victory over a B-29. 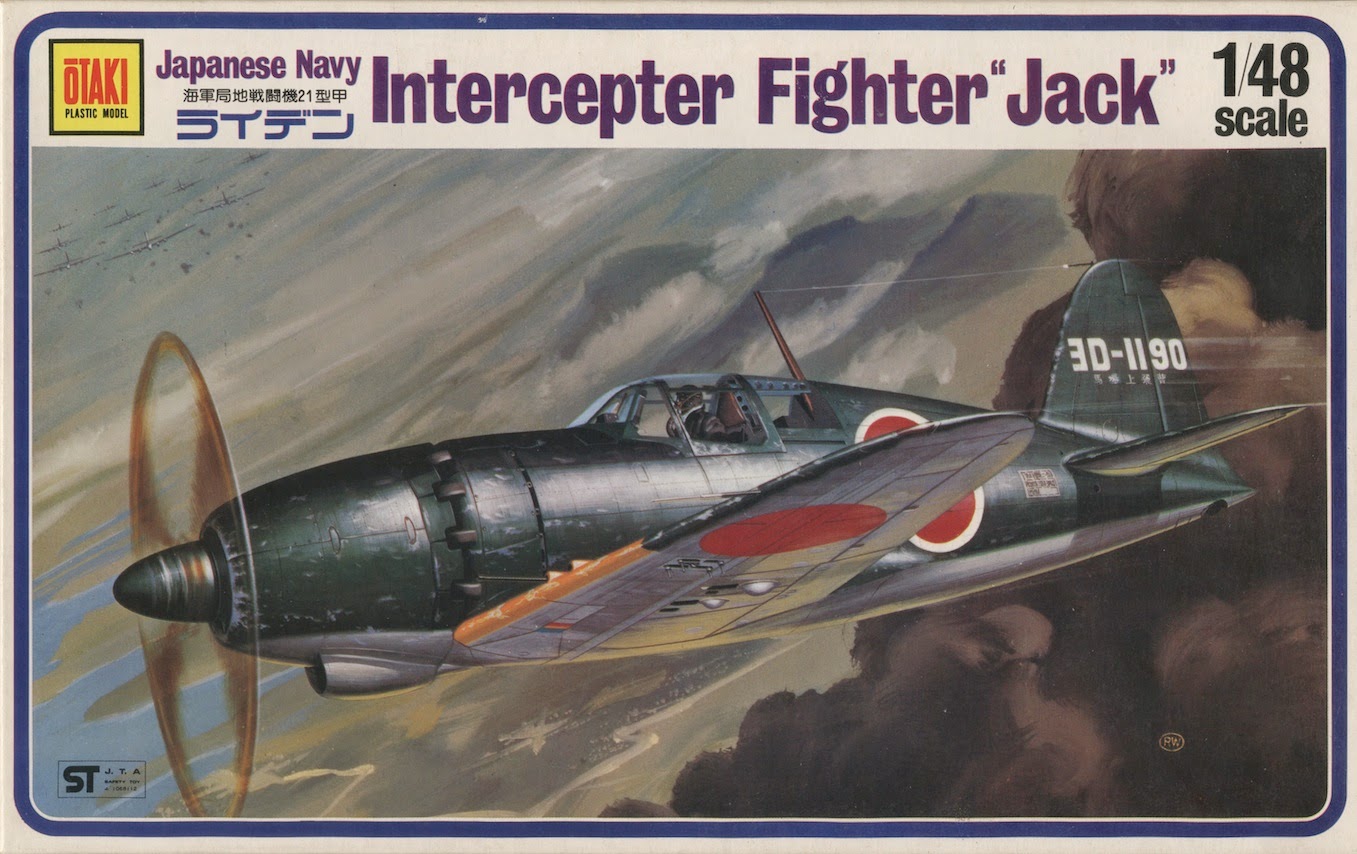 Later versions of the kit were moulded in light grey and had different box art, by Rikyu Watanabe,  featuring ヨD-1190 of the 302nd Ku climbing hard after a distant formation of B-29s as smoke rises billowing from their handiwork below. Like the Tamiya kit the later Otaki kit contained a sheet of colour profiles featuring two of the three decal options provided, the third being the box art subject. 352-37 featured again, as well as ヨD-1183 which was one of the aircraft fitted with an oblique-firing 20mm cannon in the lower starboard fuselage above the wing root. 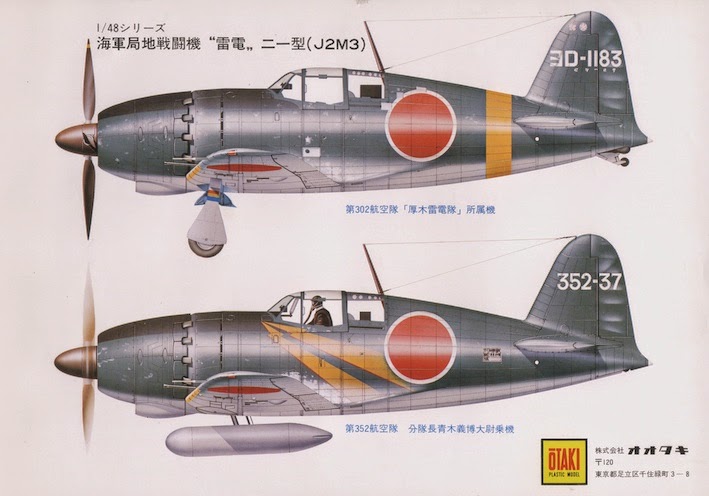 Neither the Tamiya nor Otaki/Arii kit approach Zoukei-mura expectations, or even come close to the more recent Hasegawa kit. Perhaps they are best approached as 1/72nd kits that happen to be to 1/48th scale - straightforward builds that can be enhanced to taste or simply enjoyed for what they are. 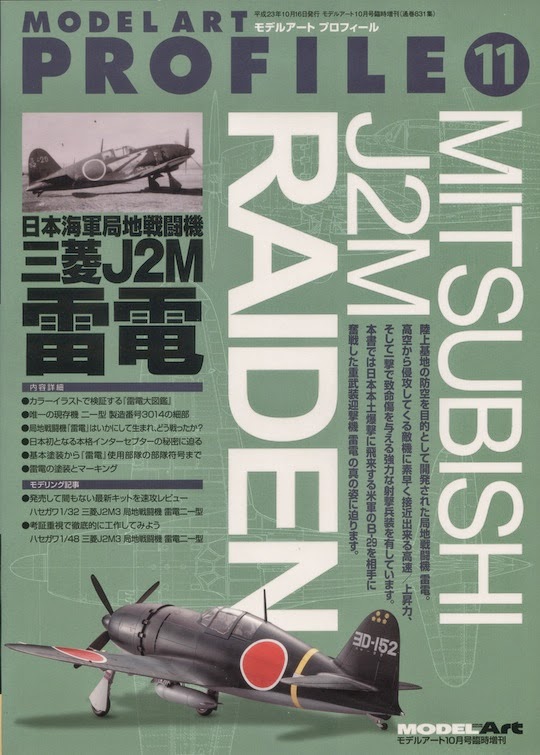 In terms of up to date references for Raiden the 2011 Model Art Profile (above) is excellent but all Japanese text, whilst the 2013 Zoukei-Mura 'Concept Note' book (below) intended to support the building of their superlative 1/32nd scale kit, will be useful to anyone serious about building a Raiden in any scale, especially if planning to add cockpit and other interior details. It has dual language text and  features an illuminating walk-around of the surviving Planes of Fame example linked to the kit details with many explanations as well as three step-by-step builds by expert modellers. 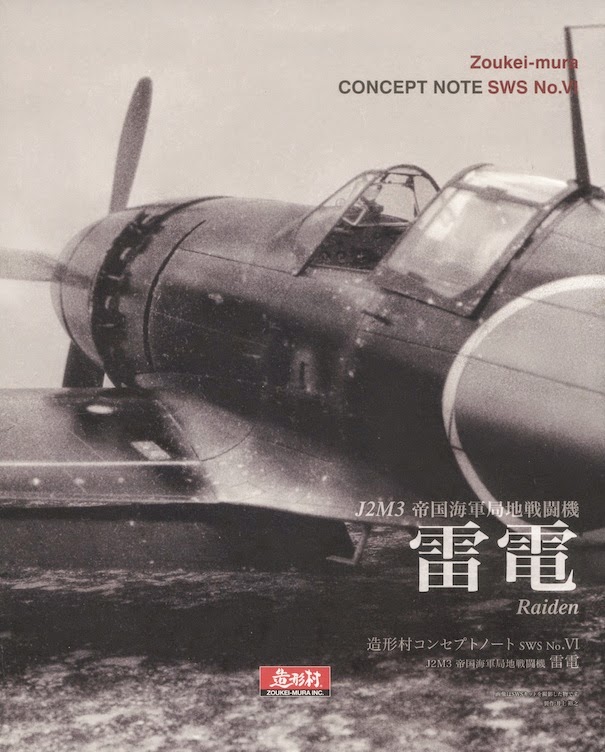 The Gakken coverage of Raiden, # 29 in the series (below), follows their standard format, with 3D cgi images of the aircraft, a photo section with very clear images of the prototypes, exhaustive coverage of the engine and fold out plans to 1/48th scale. But perhaps the most impressive feature is a comprehensive collection of very clear colour photographs of the Planes of Fame example taken outside under bright sunlight and with various panels removed. Complementing those is a large fold out colour photograph providing a pilot's eye view of the cockpit. There are also large close-up colour images of the cannon armament, top, bottom and both sides. The downside to this excellent book for Western modellers is that it is Japanese language only and being discontinued quite difficult to obtain. 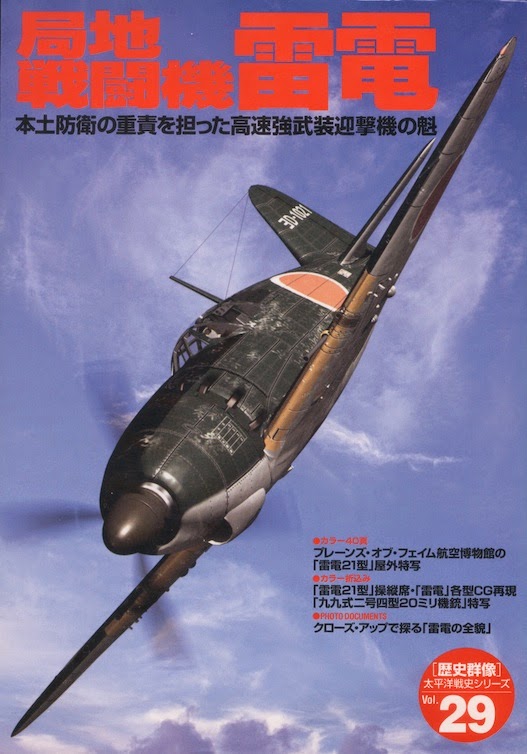 The 1996 Bunrin-Do FAOW # 61 (below) is also useful, especially for its photographic coverage of actual aircraft in service, careful study of which will pay dividends in approaching details like paint wear, weathering and spinner colours. 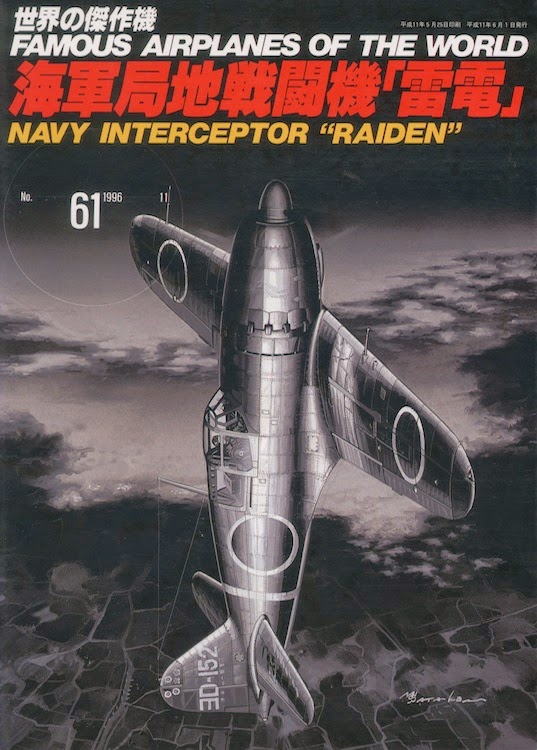 For Raiden fanatics the 1996 Model Art # 470 (below) should not be discounted as it also contains much useful detail and is worth looking out for as it  still appears second hand on eBay. 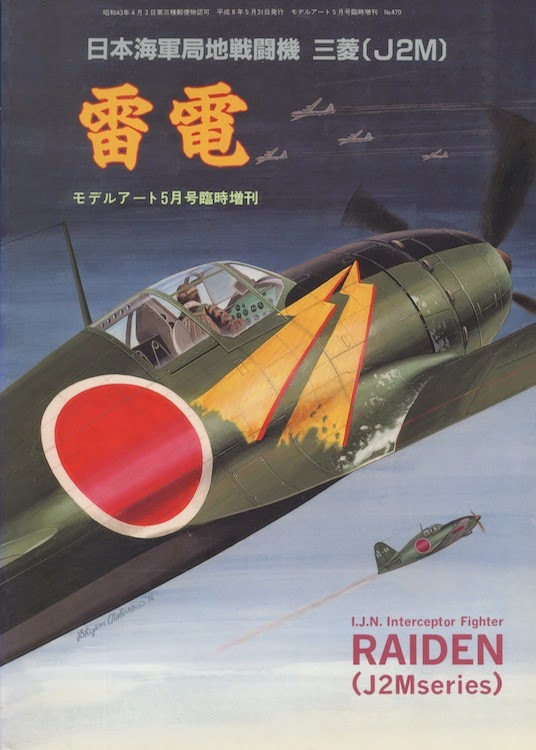 Finally there is a 2004 yellow series Mushroom Model Magazine Special by Robert  Peczkowski (below) now also available in Kindle which runs through the sub-types nicely and benefits from an English language text. It also has a fine collection of 34 inspiring colour profiles by Zygmunt Szeremeta. 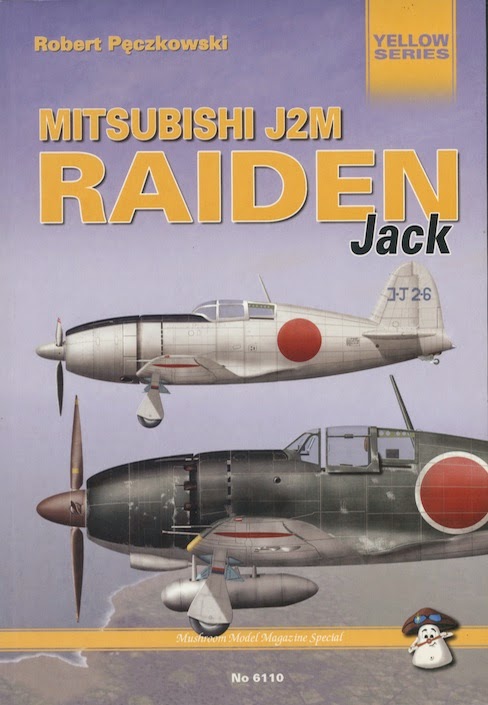 I was going to include some colour chips and notes on Raiden colour schemes here but the format for that is perhaps better served by a separate dedicated pdf, which will be available on request.

This article is excellent and exhaustive as usual, Nick!!
I will be pleased to receive the related pdf. Thanks
Danilo

I love that Otaki box art!