Ida and Tojo at Changi, Singapore 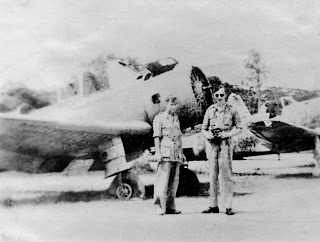 Following up on the blogs about the Gremlin Task Force here and here, Martin Page has very kindly shared this photo showing a Ki-36/55 and Ki-44 at Changi, Singapore in 1946. Martin's father John Page (on the left in the photo) served as an RAF LAC (Leading Aircraftman) MT (Motor Transport) Fitter/Driver attached to the mobile airfield contingent of 121 Wing, 2nd Tactical Air Force in Europe, from D+10 through to the German surrender.  He was then posted back to the UK in 1945 prior to being sent out to the Far East as part of the ground contingent to support ‘Tiger Force’ RAF SEAAF. In August 1945 he arrived in Singapore and was posted to 379MT MU (Maintenance Unit), Detach. 2 RAF SEAAF.  He finally returned home to the UK in April 1946.

With special thanks to Martin for sharing the image and details of his father's service.

That's a very interesting shot, Nick! Pity we can't see the vertical tail of the Tojo, but it does give a lead for looking up other photos of this base. Perhaps it will appear in the background of a snap shot of another member of this unit somewhere?


I agree with Ronnie, at www.152hyderabad.co.uk you see another pic't of a Tojo- with Sgt Cecil Kerry and perhaps at Tenggah(?) with an arrow-like symbol on the fuselage. Could this plane be the same one.

Thanks Jacob. I found it on this page:
http://www.152hyderabad.co.uk/html/body_squadron_life.html
Nice! That's a camo scheme and marking I haven't seen before I don't think!

Thanks for posting this photo, Nick,