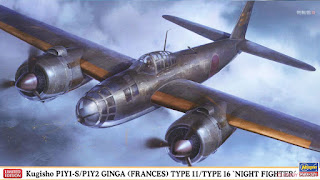 Hasegawa's recent Limited Edition re-release of their Ginga kit # 02230 (above) is unusual in providing alternative engines and cowlings for the Type 11 or Type 16 variants. As far as I know all previous Hasegawa releases of this aircraft, bomber or nightfighter, have been for the Type 11 only but Hobby Search are showing two different box arts. Whether the art shown below represents an identical previous release that I've missed or the kit is being marketed with two different box arts I couldn't say - knowledgeable input welcome!

This latest kit provides parts and markings for three examples of the Kyokkou (極光 - Aurora or Northern Lights) nightfighter as operated by 302 Kokutai in the defence of mainland Japan.

ヨD181 (YoD181 - note no hyphen) in yellow is a Type 16 of the 302 Kokutai's 2nd Chutai, armed with a single, oblique 30mm cannon, provided for in the kit by a white metal moulding. An additional sprue provides the engine and cowling parts for the Type 16. This aircraft, presumably manufactured by Kawanishi, has dark green painted cowlings, dark brown props and silver painted or natural metal under surfaces. The upper wing and fuselage hinomaru white borders have been painted over in dark green and this is well represented on the decals.  ヨD181 was photographed post-war at Atsugi by James P Gallagher in a very worn condition with large patches of bare metal showing on the upper surfaces ('Meatballs and Dead Birds' pages 87-88, Stackpole Books, 2004). The same photographs appear on pages 52-53 and 56 of the FAOW Special Edition 'Navy Bomber (Ginga)' (Bunrindo Co. Ltd. 2000). The tail number was painted over a previous number '305'.

ヨD-161 in white is a Type 11 armed with twin, oblique 20mm cannon and equipped with radar, the antennae for which are provided on a photo-etch sheet. This aircraft also has natural metal under surfaces but the cowlings are black and the propeller spinners silver. Only the upper wing hinomaru borders are painted over with white borders to the fuselage hinomaru. A photograph of ヨD-161 appears on page 54 of the FAOW Special Edition, although the location of the oblique armament is concealed by the position of the wing.

ヨD-176 in white is another Type 11 armed with twin, oblique 20mm cannon and displaying victory markings in the form of stylised cherry blossoms on the left rear fuselage, printed in yellow on the decal sheet. This aircraft has no radar and black cowlings with dark brown props and natural metal under surfaces. Both upper wing and fuselage hinomaru borders are painted over. A photograph of ヨD-176 appears on page 74 of the FAOW Special Edition and on page 148 of the Koku-Fan Illustrated No.96  on 302 Ku (October 1997), although again the oblique armament is concealed by the position of the wing. 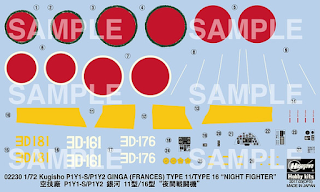 None of the options are fitted with underwing droptanks which are not included in the kit anyway.  The decal sheet is of recent Hasegawa 'bright' type with the red printed almost as a dark pink and the yellow a bright 'lemon yellow' not really typical of the IJN orange-yellow. The facsimile above shows the colours darker than they really are. The kit retails for about £19 (approx US$25) direct from HLJ but as is often the way with Hasegawa limited editions is already showing there as back ordered.

Thank you for review - will definitely order it.
I am curious about armament configuration - PrintScale decal sheet gives armament as 4x20 or 1x30 + 2x20
In both configurations 2x20 stated as hidden in fuselage and not visible.
Is it correct?
http://www.printscale.org/product_586.html

The supposed armament of 4 x 20mm is repeated across the net, on about par with reports of just 2 x 20mm but visual confirmation is not forthcoming due to the few photographs of nightfighters and the angles from which they were taken. Certainly the 2 x 20mm oblique protruding cannon are evident in a couple of photographs in which there is no sign of any additional "buried" muzzle openings. Likewise the photos of YoD181 show no sign of two "buried" 20mm and Gallagher only mentions the single weapon.

The FAOW Special Edition on Ginga shows no nightfighter armament configurations but Model Art 595 on Japanese Army and Navy Nightfighters shows sideviews of a P1Y2-S and a Gyoku-3 radar equipped experimental with 2 x 20mm and 1 x 30mm - all oblique protruding, a P1Y1 with 2 x 20mm oblique protruding, and another P1Y2-S with single 30mm oblique protruding. However the Gyoku-3 equipped P1Y1-S model in the book - Yo-201 - just has 1 x 30mm oblique. 302 Ku adopted various experimetal oblique armament configurations for its aircraft, mainly due to the enthusiasm of the CO for that type of weaponry, so a "standard" fit might not exist.

As a matter of interest the old Revell (UK) Ginga kit (1972) suggested 2 x 20mm "buried" oblique - you had to drill the holes to represent the muzzle openings!