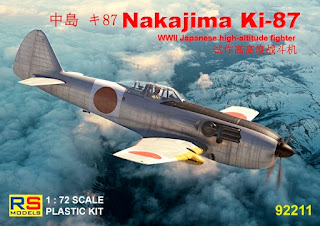 With thanks to Iskender for the heads up about RS Models forthcoming Nakajima Ki-87 duo in 1/72 scale. Lovely box art too! 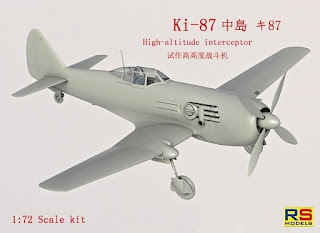 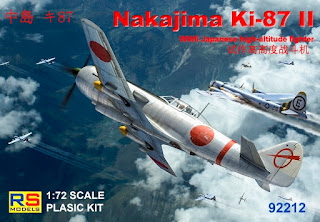 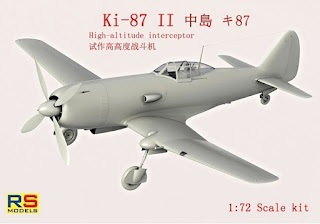 The Ki-87 looks somewhat like a Hayate on steroids and in his book 'Meatballs and Dead Birds' James P Gallagher calls it 'Big Boy', impressed when comparing its size to the P-47 - nearly four feet greater in span and two feet longer. For the prototype Nakajima had the supercharger mounted on the side of the fuselage in defiance of the Army's wish to have it mounted beneath the fuselage. The RS Models Ki-87-II shows that projected configuration, which at Army insistence was to be introduced from the sixth airframe, and appears to include cowling mounted weaponry. The Ki-87-II was a paper project with the Ki-87 to be powered by a 3,000 hp Nakajima Ha-46 engine instead of the prototype's 2,400 hp Nakajima Ha-44. Therefore the Ki-87 kit represents the actual prototype constructed and the Ki-87-II kit is a 'what if'. The standard armament was to be a pair of synchronised Ho-5 20mm cannon in the wing roots with buried muzzles and a pair of Ho-105 30mm cannon outboard of the undercarriage fairings with projecting barrels. 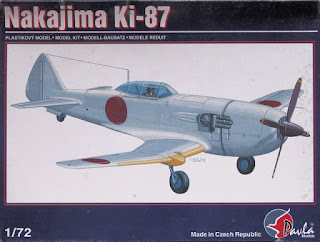 A previous 1/72 kit of the Ki-87 prototype, by Pavla (above), is a challenging build, especially in the construction of the white metal supercharger arrangement, and will likely be made redundant by the release of the RS Models kit.

All in all its looking like a bumper year for j aircraft kits. Swords nice Ki-102 and now these two. Wow.

This is very good news! I am very happy with Sword's new Ki-102.
In this case, and since I am not into 'what if' stuff, I will get only the actual Ki-87 prototype boxing.

For sure a welcome new kit, although I'd be happier with kits representing models that have actually seen effective service!
One comment: while observing more carefully this aircraft I noted KI-87 undercarriage arrangement curiously resembles that of the Italian Reggiane fighters (Re. 2000 to Re.2005) while the tail fin recalls the P-47's one

Danilo's comment puts me in mind of something I saw at an IPMS Nats many years back. Some wag had submitted a P-47 kit, painted dark green, with Hinomarus and canopy framing painted on the bubble top. There was a label: the Ki-258 Fire Dragon, first flight 1943 blah blah… concluding: "The aircraft had a superficial resemblance to the P-47 Thunderbolt."