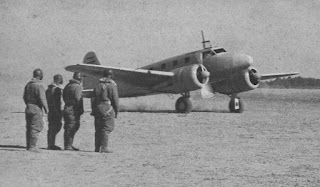 Further to my parting comment on 2 May about Summer kit releases correspondent Zegeye kindly informs me that Special Hobby are preparing a 1/72 release of the Tachikawa Ki-54 'Hickory' or Type 1 Twin-engined Advanced Trainer, a type brought into the news by the wresting (and I use that word deliberately) of a near intact survivor from its watery grave in Japan (there are surviving fuselages reported in storage at the Australian War Memorial and Beijing Aviation Museum). Good news to fill a gap but with mixed feelings as SH kits still seem to be limited run and limited availability, with the comcomitant effect of perhaps discouraging Japanese kit manufacturers from releasing a mainstream kit of the type. Details of the SH project are here.

The only previous 1/72 Ki-54 kit that I'm aware of is the A+V resin offering (above), available in different versions and nicely realised by Aldo Chetcuti here,  although AZ Models have also announced a future release, the status of which is unknown. The type offers interesting modelling opportunities as in addition to ubiquitous Japanese military service as crew trainer, general transport and staff workhorse across the Japanese Empire, it was flown briefly by the post-war Gremlin Task Force in Indo-China, by the nascent Red Army of China Air Force (later Peoples Liberation Army Air Force - PLAAF) and by North Korea. A worthy addition to any kit manufacturer's catalogue.

The series variants are variously reported online but the Hei was the transport version which could carry eight passengers with a small luggage compartment. The Ko was used for twin-engine pilot and navigator training with a single astrodome on the upper fuselage. The Otsu was intended for crew training in bomb aiming, air gunnery and radio communications, distinguished by two dome turrets for 7.7mm weapons on the upper fuselage connected by a long canopy for the instructor to move between them. Fuselage side windows were also adapted for the operation of weapons and two sets of radio equipment could be fitted. For bomb aimer training the usual load was 10 x 15kg but the aircraft could carry up to 800kg.  In a 1956 article series written in consultation with Japanese aviation industry and Koku Hombu veterans Richard M Bueschel refers to the Otsu with the designation Type 1 Operations Trainer. The Tei was reportedly configured as an anti-submarine patrol aircraft with provision for magnetic detection equipment, blind approach landing and the carriage of depth charges.

A 1/48 kit would have been perfect for Special Hobby to get into Japanese twin engine aircraft. I have contacted them in the past requesting a Ki-21 or Lorna, being they do not shy away from other 1/48 WWII twins like the Fiat Br.20 and various German aircraft. Sigh.