Ki-87 Props and that Hairyokushoku Business

The box art for RS Models Ki-87 depicts that sharp-looking, glossy dark brown that so many modellers seem to want to eschew for a flat brick red. The Ki-87 II box art prop is harely visible but looks like it might just be green in imitation of the 'what if' Hayate unit scheme depicted. Ki-87 was a long running project from 1942 but the first prototype was completed in February 1945 so the chances are that the prop was green, like Hayate and photos of the aircraft are consistent with that impression (above). Indeed Noboru Shimoune included it in a list of aircraft with green props matched to Munsell 5 GY 3.5/2.3  which is happily close to FS 34082 @ 1.34 where < 2.0 = a close match. In Model Art # 283 on Hayate the colour chip for the prop colour is shown as 9.4 GY 3.3/2.1 a little lighter than Munsell 10 GY 3/2 @ 2.72 and a little greener than FS 34094 @ 3.11. According to Katsushi Owaki this was recorded by the author Ichiro Hasegawa from the recollection of Tadamitsu Watanabe but was not universally agreed and Model Art # 329, with colour chips input from Kenji Ishikawa, describes the prop colour as "dark grey green". An extant prop blade certainly looks greyish green but appears chalked, creating a more greyish impression, whilst the oiled paint surface near the hub appears greener and slightly more olive.  Don't sweat these hues beyond choosing a green over a dark brown . . . 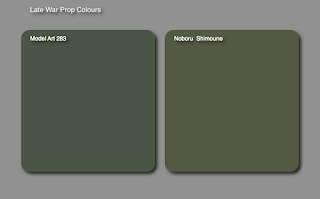 Writing of grey green the factory applied colour of the A6M2 Zero continues to confound with assertion and belief that it was painted 'Hairyokushoku' (ash green colour), whether 'dimly shining' or not, which was supposedly the Kariki 117 colour standard M1 (in the sage/grey green colour series associated with IJN cockpit interiors). Now look, from November 1941 to February 1942 a team under the command of Lt Cdr Kiyoto Hanamoto conducted a study and trials of camouflage for the Type 0 carrier fighter at the Kaigun Koku Gijutsu-sho (Navy Air Technical Arsenal - abbreviated as Kugisho) at Yokosuka, Japan under the auspices of the Yokusuka Kokutai. Their official report, Kugisho 0266, is dated 25 February 1942 (at the height of the Zero ascendancy) and relates the trial of five A6M2 aircraft flown in various experimental camouflage schemes. The report refers to the Kariki 117 alpha-numeric designations throughout and as an official document concerned with paint colours was unlikely to have just made stuff up. It describes the paint colour "currently in use" for the Zero as J3 Haiiro (ash colour or grey) "leaning slightly towards" ameiro. Ame (飴) means rice jelly, hard candy or toffee but when combined with iro (色), the word for colour, implies a yellowish-brown caramel or amber hue. So, an amber tinted or yellowish-brownish grey, if you will, absolutely consistent with extant samples of paint from the A6M2. Throughout the report the term ameiro is repeated in a kind of shorthand to refer to the then current Zero colour.

If that is not enough to convince that the colour was probably not M1, the Head of Kugisho, in making his recommendation from the report stated that "At present, my opinion is that we may continue with the currently used amber colour" (現用飴色 - gen'you ameiro). With those words by no stretch of the imagination could he be considered to have been referring to a grey green or pale green colour. In fact one of the test aircraft Yo-151, was painted experimentally overall with M1 (described as pale green), so if that had really been the standard factory colour the report could be expected to have described it that way. Why on earth would the authors of the report describe the colour M1 as J3 leaning slightly towards ameiro when they could have simply stated M1? The wilful disregard of that evidence assists no-one. And Tamiya XF-76 is like a slightly chalked and faded variant of the J3 leaning slightly towards ameiro colour, nothing like M1, unsaturated or otherwise. If that Zero model must be painted M1, hopefully only to represent Yo-151 during the Kugisho trials, then Gaia of Japan produced the hobby paint colour matched to M0/M1, tested in 2007 and described as follows in my 2011 PDF guide to the Zero colour:-

"The Japanese paint manufacturer Gaia hung their hat on Jiro Horikoshi’s description of “dimly shining ash green” and like others linked that to the Kariki 117 ‘M’ series of paints called Hairyokushoku (ash green colour). Their paint colour # 211 is identified as ‘Kai Ryoku Syoku’ (Hairyokushoku) ‘M-0’, (Munsell 6.3 GY 5/2) close to FS 24226 @ 2.74 and is a mid-toned sage green."

Religious-like faith and real paint colour - not the same thing!

Well, Nick, you just need to bash people on the head with information, something will stick ;-)

This reminds me of that scene in The Longest Day where the beach master bashes the engine hood of the Universal Carrier that won't start. It does start in the end. :D

Could the "amber" colored gray be the reason that some pilots referred to a yellow color, especially if the sun was hitting the aircraft and accenting the amber color?

Very likely, the colour is highly susceptible to iluminant metamerism. In addition to Zeros at Midway described as painted "ash gray", others were described as a "light tan, very shiny or slick", a "brownish colour", a "khaki colour", “dune coloured” (sic), “dirty brown” and “mustard yellow”. Those descriptions probably reflect older and newer aircraft, as well as Nakajima-built aircraft which were noticeably more yellowish-brown looking than Mitsubishi-built examples.

Well Vedran, I can only share such data as there is to enable an informed choice. However much is stated it can't and won't stop alternative opinions. In the modelling world opinions are almost on a parity with established facts, if not far exceeding them ("a lie can travel half way around the world before the truth has got its boots on"). Personal preference plays a big part in colour choice for models and why not? Some modellers like to support their personal colour choices with definitive data and others are not that bothered. The real issue is when some modellers, with the known facts presented time after time, still talk of a "can of worms" and cite both half-baked opinions and misunderstood/misquoted facts as though they are of equal merit and measure, thus plunging many others into doubt and confusion again. It's not quite trolling although in many threads it gets close to that but it's certainly irresponsible.

Thanks for posting your research findings, Nick.