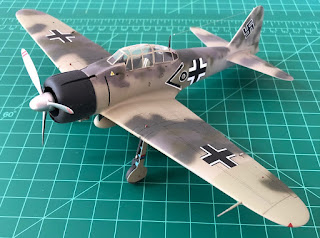 In response to correspondent Mark Smith's request in the comments made to Mark's A Whiter Shade of Pale article, Ernest Pazmany has very kindly shared these images of his superbly realised flight of fancy in presenting the classic Tamiya A6M2 in what-if Luftwaffe guise. Included here in addition is his imaginary and imaginative back story to the model. This theme was also the subject of an intriguing 2007 novel by Joh Sasaki  - 'Zero Over Berlin', (Vertical Inc.) telling the tall tale of an epic and secret overland flight of the Mitsubishi fighter from Japan to Germany. A cartoon depicting a Luftwaffe Zero puzzling a Spitfire pilot also appeared in the October, 1978 issue of Koku-Fan magazine.

Ernest used all Floquil paints to finish the Zero, built in 2000; Old Concrete as the base coat and military colours RLM 02, 74, 75 and 71 for the 'experimental' camouflage. The decals came from old Microscale and Aeromaster sheets. 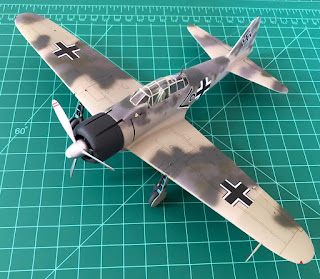 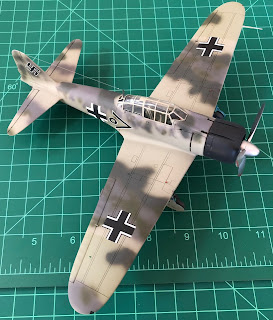 It is interesting to speculate how operation of the Zero might have changed Luftwaffe fortunes during the Battle of Britain, certainly providing longer combat time over Southern England and an ability to range further inland. Would a cadre of experienced Japanese naval pilot volunteers have also made a difference? 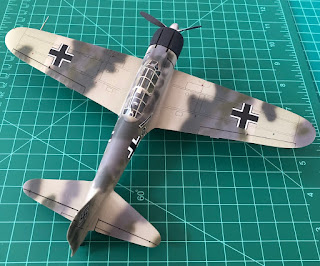 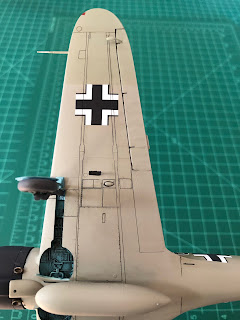 With very special thanks to Ernest for sharing these images of his model and his 'coffee stained, spurious' history of the 'Reisen in Luftwaffe Service'. Brilliant stuff! 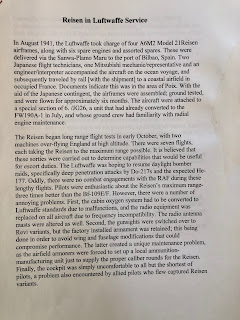 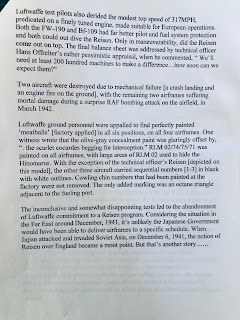 I think this is pretty dang cool. And thought provoking. Would Luftwaffe pilots have accepted the light structure of the Zero for the payoff of extended range given the fairly equal armament? Truthfully the Reisen & the Me.109 were designed for different theatres/ purposes. But...the Luftwaffe was impressed by the Ki-46 I believe. And the JAAF liked the Me.109 but thought their own Ki-44 and Ki-61 better. What if...what if....very interesting.

Wow, this is the 'nice' version of 'watch what you ask for, you might get it.'
Thanks, Ernest, for sharing this, I loved it. If any viewers enjoyed the pics, but went past the explanatory text, check it out too - it's as good as the model! Great paintwork, great imagination. And not that unlikely. Nick, thanks for a welcome 'room' to drop by and see what others are up to...or once did.

Many thanks to one and all for your kind comments. This was a fun, off-the- wall sort of thing. I was building all three of the first generation Tamiya Zekes ( 21, 32, and 52c)at the same time and decided to switch to ‘what if’ mode with the Zeke 21. I will raise a glass of Tucson made IPA and wish all of you a Happy Holiday Season. Cheers!