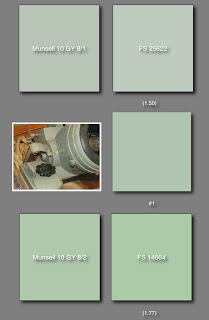 The photograph shows the very well preserved Hairyokushoku (ash green colour) paint on an Army aerial camera. This is a valuable example of Hairyokushoku because it has not been subject to extreme ultra-violet exposure, dirt or weathering. Adjacent to the photograph is the rendered chip for the median of  JAAF paint colour #1 Hairyokushoku as calculated by Owaki-san from the original Hess Ives RGB values in the JAAF paint colour standard documents. Visually the colour of the camera lies midway between Munsell 10 GY 8/1 and 10 GY 8/2, the former being slightly too grey, the latter slightly too green. The closest FS 595b values are to the right of each chip respectively, marked with the DE2000 difference calculation in parantheses. In each case the FS value is within the score of 2.0 needed for a close match.
As published the photograph appears slightly more grey and not quite as green as the original. It is almost identical to Owaki-san's chip. The appearance of the colour is similar to the RAF Sky Type 'S' but paler and brighter. Many references describe the paint as "blueish" and certainly at the low end of the range the colour has a definite blue-green quality, almost like a very pale turquoise. As a result of the pigment mixes, as with Sky, variations would be towards blue, towards green and towards grey. The warm brownish caste seen on some extant examples is an aberration from standard not yet fully explained but possibly due to age discoloration or the use of plant resins as binder.
A consensus is emerging that the Army Hairyokushoku was more blueish than the Navy version of this colour, the latter appearing more yellowish-green.
Taking the Munsell values as the low and high ends of the tolerable range I compared them to the Army colours identified by Thorpe. At first there appeared to be no exactly similar colours in the Thorpe chart. (To be continued).
Image credit: Photograph Gakken 61
Rendered colour chips © Owaki-san & Straggler 2008
Posted by Straggler 脱走兵 at 02:10