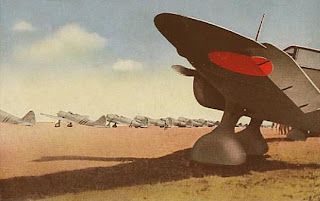 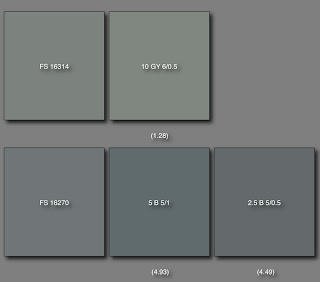 In his report on Ki-27 colours at j-aircraft.com noted Japanese aircraft colour expert and relic collector James F Lansdale compared the appearance of the rudder from the 77th Sentai Ki-27 #842 brought down in Burma (see Part 5 below) as "a close match to FS 16314 in bright sunlight. However, the Munsell visual match by MIKESH inside the Museum rendered a better match to Munsell 5 B 5/1 (close to FS 16270)".
It is a little difficult to reconcile a visual measurement inside a museum with being a better match than one taken in daylight but in any case Munsell 5 B 5/1 is not close to FS 16270 - in fact the calculated difference between them is 4.93 where 2.0 or less = a close match. A closer match to 16270 is Munsell 2.5 B 5/0.5 @ 4.49, but not by much!  Munsell 5 B 5/1 is actually much closer to FS 24237 @ 2.78.
A piece of rudder fabric presumed to be from #3218, another 77th Sentai Ki-27, "appeared to be a close match to FS 16307 (Munsell 7.5 Y 5/1)". The difference calculation between these quoted FS and Munsell values is a whopping 8.46 where 2.0 or less = a close match. FS 16307 is actually closer to Munsell 2.5 GY 6/1 @ 1.91, which is almost an identical match. These comparisons raise the question as to whether the quoted FS or Munsell values represent more closely the appearance of the original artifact, a common problem when multiple colour measurement systems are referenced.
Neither of the rudders appears to show the pale blue-green of JAAF #1 Hairyokushoku (Ash Green Colour) but are more towards warm or blue-greys. In 1972 South Africa's well known aviation artist Ron Belling conducted a series of experiments with colour, including the colour Sky (a mixture of white, yellow oxide and Prussian Blue pigments), using BSC 1964 cellulose paints. He found that after two months of exposure matt Sky was the first colour to change "and six months later it was very slightly more grey than the gloss sample which had remained unaltered. After sixteen months matt Sky had become a more blue-grey than the gloss because the Yellow had evidently faded out of the surface layer, having been broken down by ultra-violet light."
So it might be reasonably concluded that ultra-violet exposure may tend to fade the yellow pigment in grey greens, making them appear more blue-grey over time. Once a painted surface is removed from exposure long term storage may result in the "ambering" typical for cellulose paints, making it appear darker and browner.
Image credit: rendered colour chips © Straggler 2008
Posted by Straggler 脱走兵 at 18:15

This is very good note about the sensitivity of color. Sample present is interesting. From my view I still don't understand why there is not direct match for the base color manufactured by Japanese industry? From the experience I have this archeology findigs are used as guide to the final source, not as direct match and reference. In this way I wonder why is still in life publicing of the works based on direct matchs. Add chemical changes, dust, finger prints... masny reason why the color could not be same after some time even if you keep it in good maintaned showcase in room.


But for sure is that you are in good way Nick and please keep us informed with new info and update.