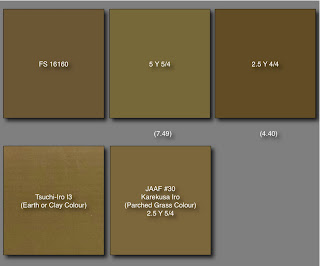 In his report on Ki-27 colours at j-aircraft.com, James F Lansdale also referred to "a small piece of aircraft metal which was a close match to FS 16160 (Munsell 5 Y 5/4). This color is similar to the color called I3 or 'grey-poupon'". This artifact was associated with Frank Lawlor and may have been recovered from one of the 77th Sentai 'Nates' brought down over Burma, but the provenance is not definite.
FS 16160 and Munsell 5 Y 5/4 are not close; in fact the DE2000 difference calculation is a significant 7.49 (where 2.0 or less = a close match). The Munsell value 2.5 Y 4/4 is closer @ 4.40, but in reality neither may be considered good matches. FS 16160 is a colour that has also been cited for artifacts from Nakajima-built Zeros. It does indeed appear like the I3 from the IJN colour standards book known as 'Kariki 117' but it is also similar to the Army paint colour #30 'Karekusa Iro' (Parched or Dried Grass Colour).
It may be going too far to presume that an ochre colour like #30 was factory applied as an overall scheme on the Ki-27 but it certainly figured as one of the predominant colours available for the camouflaging of Army aircraft. After being on the receiving end of unwelcome attention from the AVG (the Flying Tigers) at its airfields in Thailand, the 77th began to hastily camouflage the upper surfaces of the wings and tailplanes of their Ki-27 aircraft, using at least two colours but possibly more. At least one aircraft was completely camouflaged. These ad hoc camouflage schemes have been depicted in various colours but it is not beyond the realms of possibility that #30, or an ochre/earth colour very much like it, was used.
Whatever the explanation, it is unlikely that a colour such as FS 16160 represents the factory applied 'Hairyokushoku' (Ash Green colour) of the Ki-27. Descriptions such as "olive gray" or "gray-poupon" are misleading terms for the straightforward ochre/earth colours specified in the Kariki 117 and JAAF colour standards as I3 and #30 respectively.
Posted by Straggler 脱走兵 at 16:46

I recommend you to use the word of Kariki(仮規）117 instead of Kaki 117. It was Naval Aircraft Colour Standards.

I have very proud to state one of my collection from A6M5/Mitsubishi-4400 is 7.5Y5/2 and lower colour of B5N2(serial unknown) flap owend by David Aiken is 5Y5.5/3. These colours are claiming as Zero top coat by JFL.

Thank you Owaki-san. I have corrected it.