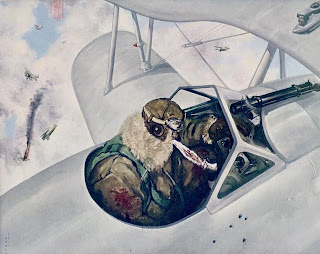 This contemporary painting depicts the severely wounded Lieutenant Yokesuke Fukuyama of the Army's 2nd Hiko Daitai (Air Battalion) struggling to keep his Kawasaki Ki-10 biplane fighter in the air following combat with Chinese aeroplanes on 10th April 1938. Lieutenant Fukuyama managed to reach his base and crash land but unfortunately died of his wounds four days later.
The artist has depicted the aircraft in a very cold pale grey scheme with little hint of blue and/or green. Does it represent a silver-grey dope? In addition he has provided a tantalising glimpse of the interior colour, not the expected sandy brown associated with Kawasaki Hien cockpits but instead the Malachite green (Methuen 26B6) of earlier and popular Japanese references.
As artwork it may be tempting to dismiss these colours in preference to the tangible and seductive evidence of extant artifacts from later Kawasaki aircraft. However, this large painting was displayed alongside the actual remains of Lieutenant Fukuyama's Ki-10 (refer to the photograph on page 6 of Arawasi Magazine Issue #5). As such it seems unlikely that the artist would have depicted colours so far removed from the original. The colours he has used for the pilot's flight clothing and equipment appear absolutely correct.
Russian pilots encountering the Ki-10 over Nomonhan described the pale grey-green colour scheme as "almost white" in the bright sunlight.
Image credit: Author's collection
Posted by Straggler 脱走兵 at 11:01

As the painting still exists, it would be very helpful if someone with access to it could make their best match to the overall gray color of the plane, using swatches from some color standard as a reference. Since I am wishing out loud, a color photo of the color standard swatches, in view with the painting, would be ideal.