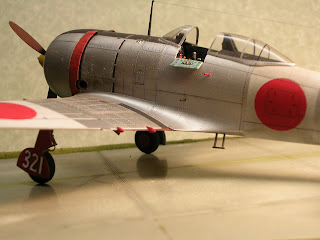 Here are a couple more images of the 1/48th scale Otaki Ki-44 built by Mark Smith and mentioned in the review of Lifelike Decals Shoki sets here. The amazing thing about this lovely model is that all the markings are painted on as at the time it was built there were no aftermarket decals available. Mark still really likes the Otaki Ki-44 for capturing the lines of the Ki-44.  He remembers comparing it with the Hasegawa kit when that one came out and concluding that whilst the Hasegawa kit is better overall, certain shape aspects are still better captured in the older kit - the fin and rudder for example. The model has a vacform canopy and scratch-built cockpit, new cowl flaps and some extra detail added to the landing gear and engine.  The natural metal finish is SNJ which Mark recalls as being a lot of trouble and smelling really dangerous!  The 246th's 'umeboshi' (梅干 dried plum) tail emblem was made with a stencil and airbrush, whilst the landing gear doors were painted with a brush. The model was built before anyone offered resin parts for it, and as Mark recalls the only etched metal that was available at that time and pertinent to WWII planes were Waldron seatbelts (applied to the model) and placards. 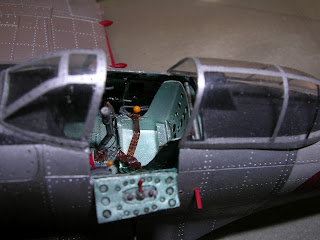 Some puzzlement over my description of the greyish-black paint on Lt Inayama's Shoki as 'anthracite'. I meant it in the sense of the German anthrazitgrau which was a military primer paint that came into use around 1935 and was also used by the Luftwaffe as 4/840/R Fliegerblaugrau (RAL 7016). Blue-grey? Yes, a very dark blue-grey where the blue can be fugitive as it is introduced to the reflectivity from the blue shade carbon black pigment in the paint. Counter-intuitively the paint also contains chrome yellow which provides a degree of anti-corrosive protection and the combination results in a subtle colour shift of the greyish-black, dependent upon illuminant, from slightly blueish to slightly greenish, exactly similar to the JAAF # 3 paint colour Hairanshoku or Hai-Ai-iro (灰藍色 literally ash indigo colour), which was introduced as a primer paint and cockpit interior paint colour in 1936. The Munsell value for RAL 7016 is 7.7 B 3.0/0.8 but there is a usefully close FS 595B value - 35042 @ 0.82 (where < 2.0 = a close match) which also provides a reasonable impression of the colour. If you examine 35042 and find it hard to imagine that such a very dark blue grey contains chrome yellow bear in mind that the FS 35042 paint colour also contains that pigment, as well as phthalocyanine blue (green shade). As a general primer paint # 3 was widely used and might well have provided the greyish-black paint that was applied to Lt Inayama's Shoki. 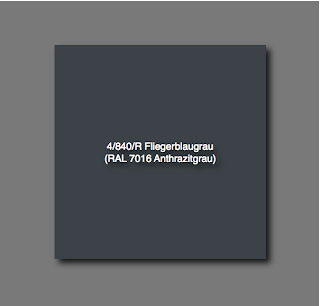 Thanks for the anthracite swatch and commentary.

Hi, Nick!
FS35042 is a dark, "sea" or "Navy" Blue. Seeing it at the FED-STD 595 server (on the same screen!) looks completely different from the Anthracite swatch in the blog. Optical illusion??
Fernando

There is the same problematic visualisation of blue chroma within JAAF # 3. Some see a very dark grey with little or no blue whilst others see a very dark "navy" blue. What complicates this visualisation issue further is that actual paint samples show variance between dark grey and dark blue! Whether that reflects subjective visual matching issues in production is an interesting imponderable!