Courtesy of the excellent photography of Ken Glass come these super images of a 1/32nd scale Ki-100, built by Art McNitt using the Alley Cat Ki-100 bubbletop conversion set and the Hasegawa Ki-61-1. Alley Cat have other conversion sets for the Hasegawa kit, including the Ki-100 razorback variant and early and late (bubbletop) variants of the Ki-61-II Kai. A review of the Ki-100 razorback set can be found here.

The model represents an aircraft of the 244th Sentai, the famous Imperial Palace defenders, after this unit had been assigned to the 30th Fighter Group (together with the Ki-84 equipped 47th Sentai), as part of the mobile air defence force assigned to the Sei-go control operation in May and June 1945. According to Alley Cat the subject of the model is a Ki-100-I Otsu flown by Major Teruhiko Kobayashi, the CO of the 244th, at Chofu, Japan in May 1945.

One of the lesser know facts about Major Kobayashi, a well-known Ki-61 ace with 12 victory claims, ten of them B-29s, is that he was originally trained as a light bomber pilot and flew the Kawasaki Ki-32 "Mary" in the 45th Sentai during the attack on Hong Kong. When posted to the 244th in November 1944 he was the youngest Sentai commander in the JAAF. 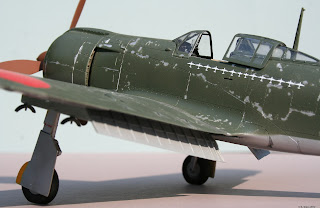 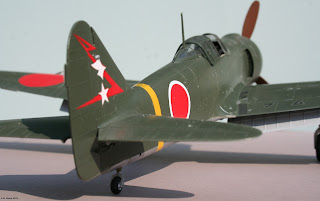 Appearing over Japan towards the end of the war, the "Goshikisen" (五式戦 - 5-Type Fighter) was never assigned an Allied reporting name. According to the exclusive research of Giuseppe Picarella the surviving example of the Ki-100, construction #16336 manufactured at Kagamigahara in June 1945 and now preserved at the RAF Museum was one of 24 aircraft found at Tan Son Nhut (Saigon) airfield in French Indo-China after the Japanese surrender in August 1945 and was in serviceable condition. A Japanese ferry pilot Sergeant Y. Kishi, disclosed during interrogation that he had delivered the aircraft by air some 2,500 miles from Japan shortly before the surrender as a morale booster. To facilitate test flying, the engine was stripped and serviced by Japanese personnel at the start of November, and Kishi was chosen for the initial post-overhaul test flight. 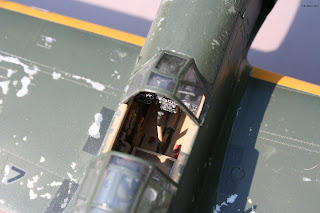 On 26 November, after an unknown number of proving flights, Kishi was cleared to fly the aircraft to Bien Hoa airfield, 15 miles away, to start the flight test programme proper, taking off at 09.07. On the approach the undercarriage refused to lower, and he was forced to return to Tan Son Nhut and make a wheels-up landing, collapsing the oil cooler and damaging the propeller and tailwheel. The aircraft was repaired by Japanese personnel using parts scavenged from other aircraft at the airfield, including a propeller from a Ki-46 Dinah and an oil cooler and its fairing from a Nakajima Ki-84 ‘Frank’. A Ki-61 provided the fuel cooler, wing pylons and tailwheel unit. The Ki-100 was subsequently moved to a concentration airfield at Tebrau, Malaya, intended to be part of a mass shipment of ex-Japanese aircraft back to the UK as war trophies. Unfortunately these plans were scuppered by the intervention of Lord Louis Mountbatten and most of the aircraft were destroyed. The Ki-100 made it back to the UK on the basis of its mistaken identity as a Ki-43 "Oscar", the main fighter opponent faced by the RAF over Burma. 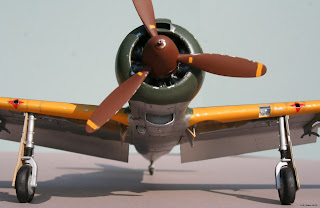 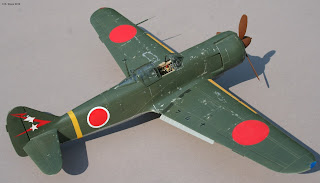 Thanks Anatoly and Bob for your kind comments.