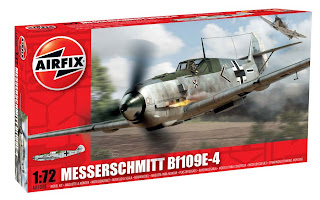 There is only one word to describe the new Airfix 1/72nd Messerschmitt Bf109 E-4 kit. Exquisite! Not being a member of the Luftwaffe Expertenati I don't care about some of the more arcane aspects that might be in error or disputed. I fondle the plastic, test-fit - click-click - and compare it to everything that has gone before in this scale with 109E on the box. I am in awe of the progress this company has made in such a short period and how evident it is that they take seriously and respond positively to criticism. I am also in awe of what the kit contains and how it has been engineered for £5.99. Dropped flaps option, separate radiators (and their subtle shape excellently sculptured), beautifully molded engine block that is unfortunately hidden if the superb cowling is fitted, open canopy option, nose intake interior, gunsight, separate exhausts, weight flattened tyres and tailwheel too. Even a pilot who looks like a Luftwaffe pilot. I'm not the world's greatest fan of cgi but even the box art of this kit is impressive as Von Werra twists and turns at low-level over Kent in his first unsuccessful escape attempt with a dense plume of engine smoke undulating behind him.  Dislikes? Yeah, the end opening box - but at least it's strong!
So why is this famous Luftwaffe fighter featured here?  Well, because every hard-core Japanese 1/72nd aircraft enthusiast has the excuse to enjoy this exquisite kit either by presenting it seriously as one of the imported aircraft - of which more anon - or more frivolously as a JAAF 'what if'. Imagine it licence-built in overall grey-green with an 11th Sentai lightning bolt on the fin and rudder for the invasion of Malaya, or mottled green over natural metal with white tail stripes as it heads south with the 78th Sentai.  And I urge them to do so. If sales support this company's continuing rise and increasing excellence then who knows, we might even see something new and Japanese that is not a Zero!
No decals for a Japanese option in this kit alas, which is limited to a single set of markings for 'The One Who Got Away', but not too difficult to improvise.  Highly recommended.
Image credit: © 2012 Airfix and Hornby Hobbies Limited
Posted by Straggler 脱走兵 at 10:29

Thanks for this excellent review, Nick. Looks like another kit that needs to be added to my stash!

a very sensible and accurate appreciation of a very nice kit - I've just finished my second one...your treatise on JAAF Emil colours though gives the lie to your comment about not being an 'Experte' ...unfortunately and by way of comparison I'd be totally incapable of commenting in such an informed manner on the new Airfix Zero..which also for what its worth looks very nice...