More splendid profile art by Srecko Bradic - this time of a Ki-45 Kai Toryu "Nick" (Army Type 2 Two-seat Fighter) in the markings of the 13th Sentai.
The 13th Sentai was ordered to transfer from the 1st Air Army in Japan to New Guinea on 2 April 1943 and began the movement, via the Philippines, on 20 April with 9 of its complement of 20 Ki-45 Kai. It arrived at Rabaul on 11 May and was assigned to the 6th Hikodan (Air Brigade). Based at Rapopo (Kokopo), the southernmost airfield of the Rabaul complex it began flying day and night intercept missions over eastern New Britain.  By 31 May 1943 it reported 11 Ki-45 Kai aircraft on strength of which 10 were serviceable.
In June 1943 the 13th absorbed the 5th Sentai's 'tokusho kogekitai' or special attack unit which was equipped with Ki-45 and Ki-46. This unit had arrived in Rabaul in February 1943 for the purpose of intercepting high-altitude B-17s and its Ki-46 were field modified with various armament combinations which is a separate interesting subject to explore! From July the unit began detaching its Chutai (squadrons) to New Guinea and by 31 July had deployed one Chutai to Tuluvu at the western end of New Britain and one to Wewak-East airfield (Boram - see photos below) whilst a third Chutai remained at Rabaul. 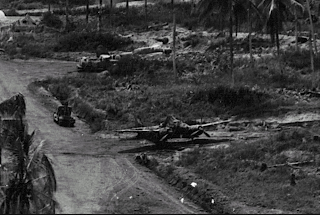 On 16 August the Wewak detachment intercepted a B-24 and B-25 night raid, claiming one victory and one probable but by then the unit was under the cosh of USAAF 5th Air Force raids and reported only two serviceable aircraft available for operations. Around this time the unit began operating Ki-43 aircraft and lost one of its last two Ki-45 in the vicinity of Wewak on 27 September 1943. 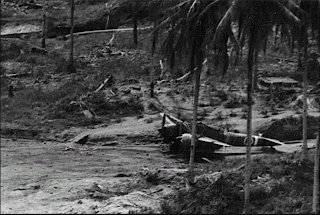 Colours and Markings
The Ki-45 Kai was unusual for a fighter aircraft in that it was factory painted throughout the war. At a time when other single-engined fighters were leaving the factories unpainted and then being camouflaged at Depots or at unit level the Ki-45 was finished at the factory overall to JAAF paint colour standard # 1 Hairyokushoku (灰緑色 Ash green colour) over which a dark or olive green mottle was usually applied. This mottle was generally a "marbled" type with large carefully applied blotches creating narrow "veins" of the underlying paint but the study of photographs reveals variations in style and execution. The reason why the Ki-45 Kai was factory painted this way has not, AFAIK, been established. Props and spinners were finished in the dark brown paint common to other JAAF types.
Various tail emblems have been attributed to the 13th Sentai but the marking shown in the profile, supposed to represent the number '13', is evidenced from photographs of an abandoned Ki-45 Kai believed to have belonged to this unit. The tail markings are indistinct in the Boram photos but on one aircraft appear to have been painted out.
Credits: Profile illustration © Srecko Bradic; Photos NARA; Unit data Larry DeZeng and Rick Dunn
Posted by Straggler 脱走兵 at 09:42

Hi Nick,
Excellent post! Sure hope that the Ki-46 portion of the story is also touched on here....
Dan