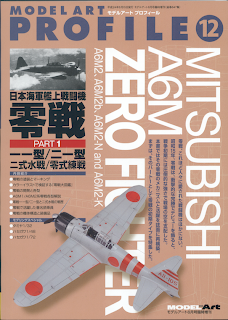 The latest aircraft type monograph from Model Art is about the Mitsubishi A6M Zero Fighter and is Part 1 of, presumably, a two-part coverage starting with the A6M2, Rufe and two seat A6M2-K trainer. This contains 9 pages of colour detail paintings of various aspects of the A6M previously featured as a part series in the Model Art magazine - a useful collection for anyone planning a large scale build - or even an ultra-detailed small scale build! This is followed by a chapter on colours and markings giving very thorough stencil detail and 17 pages of colour profiles, four per page, in the 'flat' style many prefer. There is a detailed analysis of development with many drawings, plans and photographs, followed by an operations history, a photo register of Zero aces, and a gallery of photos, most of which are well known but reproduced here to a useful size and quality not usually seen. Finally a modelling guide in colour covering the Tamiya 1/32nd, Hasegawa 1/48th and Hasegawa 1/72nd kits. The text is mainly in Japanese but a potted English language summary of the colours and markings chapter and profiles is included and full marks to Model Art for doing this.
The colours and markings section, by Shigeru Nohara, has a presentation of printed colour chips which are quite accurately rendered in a style that looks familiar. The factory paint colour is described and referred to as 'gen-yo ame-iro' (現用飴色 - 'currently used ame colour' where ame means rice jelly or candy - an amber colour), a description taken from the Yokosuka Kaigun Kokutai (KuGiSho) Report No.0266 of March 1942:-
"The Type Zero or the A6M fighter, developed as a successor to the Type 96, had an anti-corrosion finish made on the production line. Its paint finish consisted of a layer of red-oxidised (sic) primer paint on the alloy construction base surface which was covered with a benzyl-cellulose based metal paint in what could be expressed as "grey-green-bistre" as a top coat."
So far so good and I can detect some grey-green hearts a leaping at this. But soft, what light from yonder window breaks? The unusual term "bistre" is said to mean a dark grayish brown, with a yellowish cast. Mr Nohara goes on to explain:-
"Immediately after application, it had a glossy appearance and more or less looked like an old-fashioned Japanese starch syrup (mizu-ame). Strangely this color was not listed in the Standard for Naval Paint nor been given a color code and/or official name, and the name and code are still unknown today. In an experiment held between November 1941 and February of the next year in order to develop effective aircraft camouflages on the Type Zero fighter, this "grey-green-bistre" color was referred to ambiguously as "gen-yo-ame-iro"."
Well, not quite. Before the repeated and abbreviated description the paint colour was first described as J3 (Hai-iro ash or gray colour) leaning slightly toward amber colour (Ame-iro - caramel or candy colour)". But the thrust of the description is correct and concludes that:-
"The shade (hue) of the "gen-yo-ame-iro" is close to FS 14201 (gloss) or FS 24201 (semi-gloss) as in the American FS595b color standard."
So all's well that ends well. But then, remarkably, the modelling guides go off at a tangent and describe the colour as that old impostor grey-green - as in 灰緑色 (hai-ryoku-shoku - ash green colour). Isami Akiyama paints his 1/48th Hasegawa Zero model in Mr Color 315 which is semi-gloss FS 16440. This colour is pale and de-saturated when compared to the Zero paint colour with a difference calculation of over 11 where less than 2.0 = a close match. It is paler than even the most extreme colour value on the degradation model with a difference to that of 6.23. The pigments are quite different too. FS 16440 is probably most familiar to modellers by being regularly cited to match USN Light Gull Grey - and that is another story - but make of that what you will. The light grey Zero dies hard! 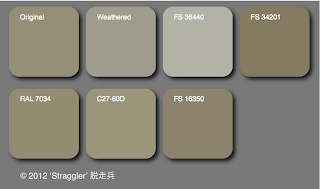 The closest colours with which to visualise the original Zero factory paint colour in available modern standards are FS 16350 in FS595b (fair), C27-60D (Munsell 7.5 Y 6/2) in JPMA (better) and RAL 7034 (best), the latter being designated, unsurprisingly, as Gelbgrau - yellow grey. The grey colour as shown on the cover of the Model Art book, on the models in the modelling guide and on the modelling guide profiles is only suitable to represent a long exposed, oxidised and heavily chalked paint surface (and probably goes too far if an operational aircraft is to be represented), in which case it should be depicted as dull and weathered rather than glossy and brand Harry spankers! I'm not sure why the editorial staff let this dichotomy go in the book because it is guaranteed to cause some head scratching.
Generally, this title will be useful to the modeller planning to build the Zero, concentrating as it does much useful material and visual guidance into one handy book, and is unhesitatingly recommended. The price of ¥2381 (about £19) is actually good value considering the very concentrated and full content.

Many thanks for putting this latest Model Art up Nick. I have ordered mine via HLJ. The paint chips you provided in the write-up are also much appreciated.

I noticed a couple of the images that look like the wing of PO1c Toyoshima Hajime's A6M2 Zeke m/n 5349 which was downed on 19 February 1942 and a Zeke drop tank, both of which are on display in the aviation museum in Darwin.

And I like At McNitt's model Ki-100-1 - along with Ken Glass's superb photography of course...