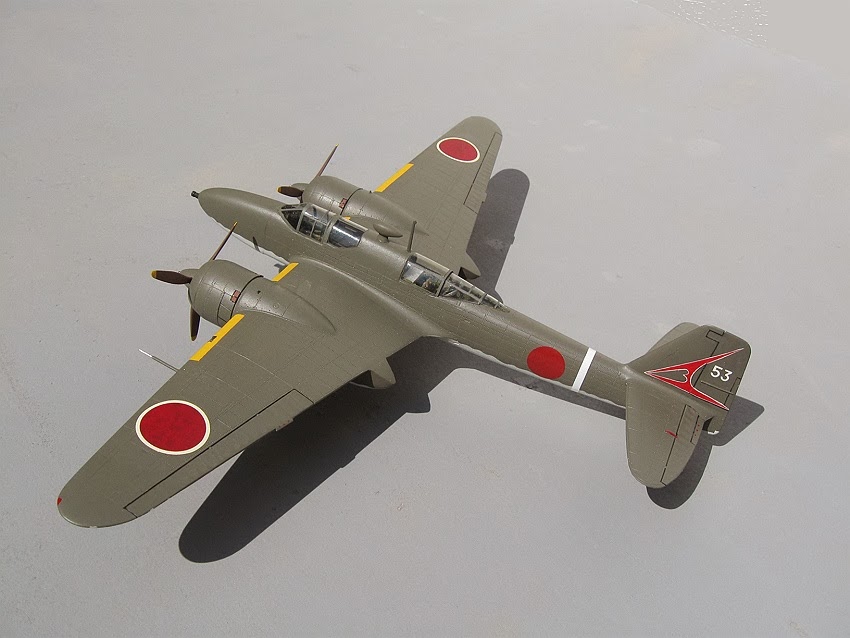 This superb model of the formidable Kawasaki Ki-102 by John Haas was created by an extensive modification of the classic Nichimo 1/48th scale Ki-45 Toryu kit.  John based his remarkable conversion on 3-view plans in an old Koku-Fan magazine, enlarging them to the requisite scale on an office photocopier. 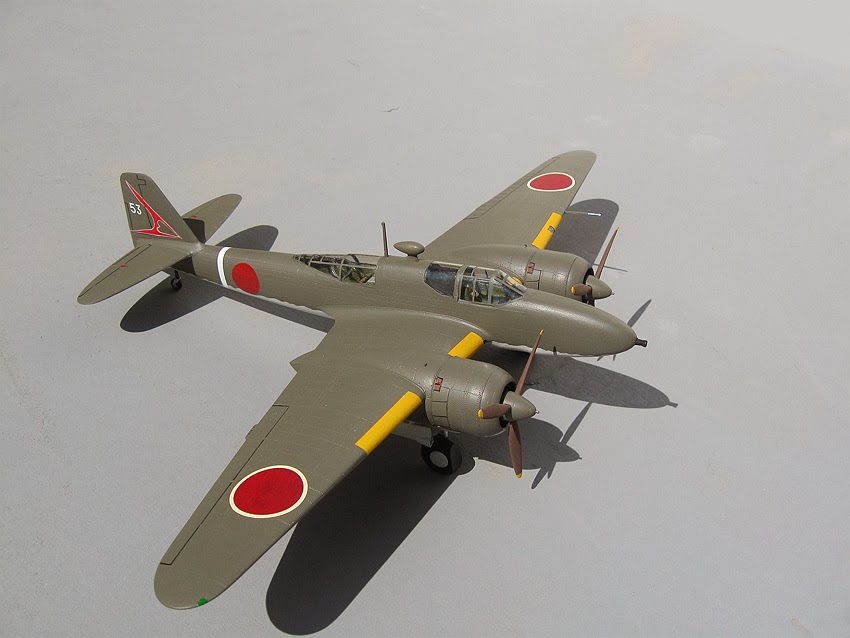 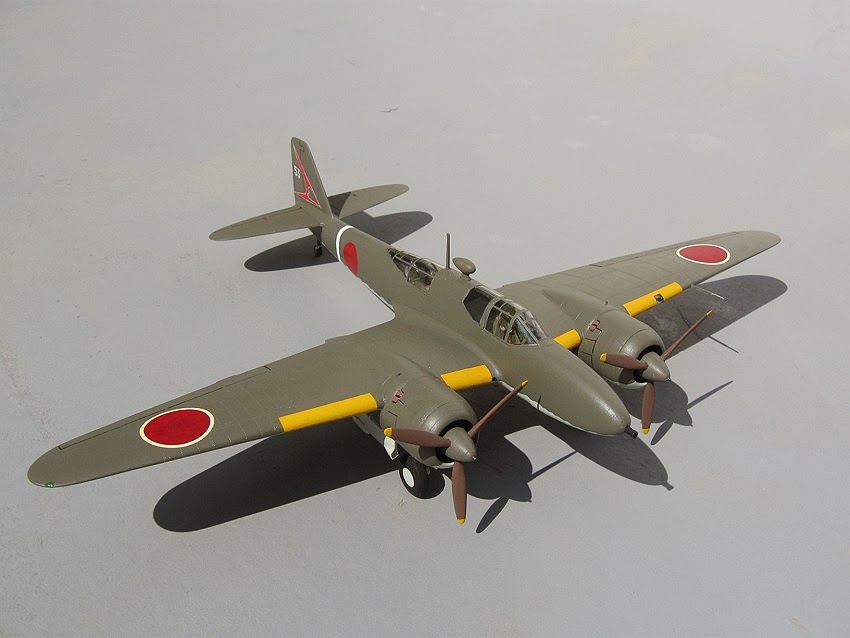 The most important modifications were to lower the upper contours of the fuselage between the cockpits, to replace the nose with a larger one made of solid wood, install a new rudder and make some modifications to the engines. 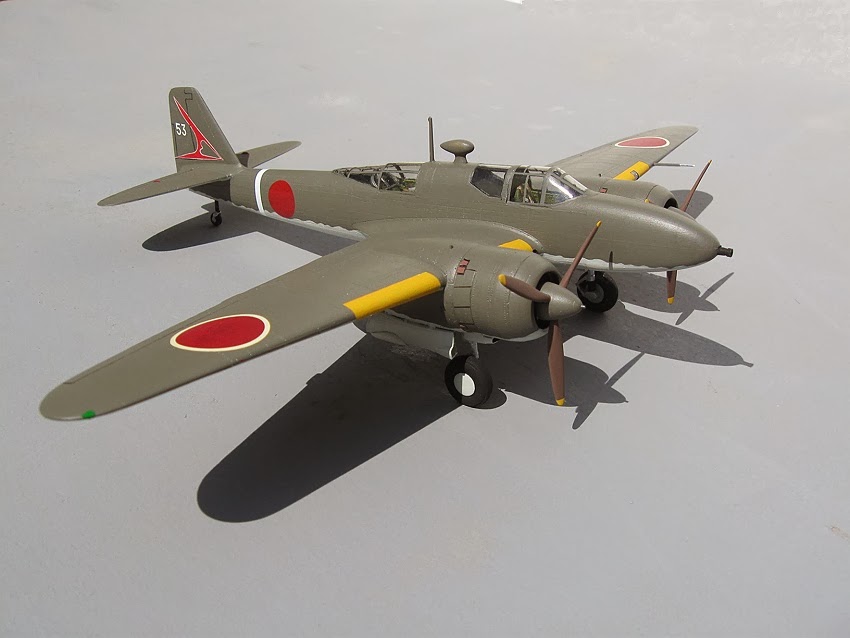 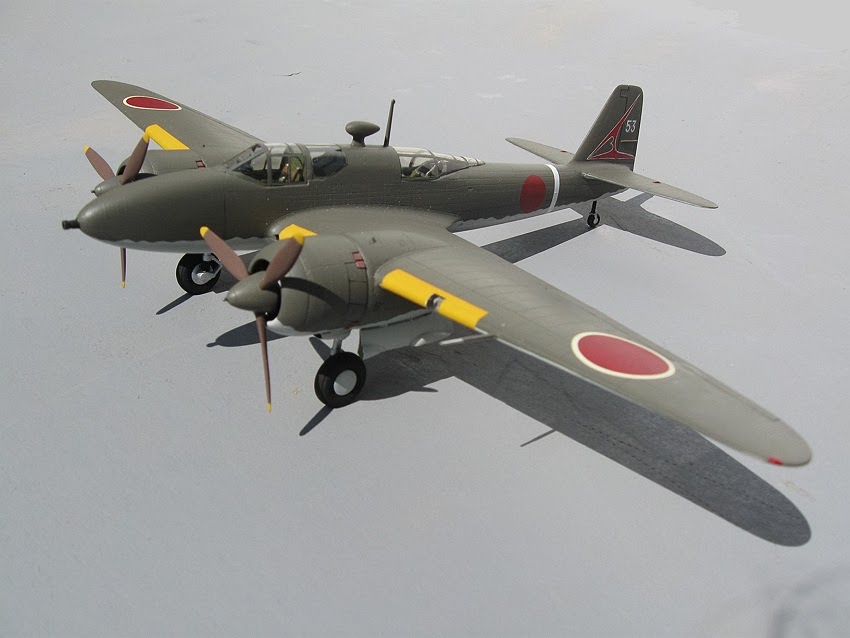 Developed from the Ki-96 single-seat twin-engined fighter, itself a development from the Ki-45, the Ki-102 was envisaged as a multi-role fighter configured for either high-altitude interception as the Ki-102 Ko with turbo-superchargers or as Ki-102 Otsu - a heavy ground attack fighter without them.  Construction work began in June 1943 with the authorisation of three prototypes and the first flight in Otsu configuration was made in  March 1944. First use in combat was in November 1944 when Major Yasuhiko Kuroe attempted an interception of a high-flying B-29 photo-ship in a Ki-102 Ko prototype from the test centre at Fussa. The failure of both superchargers forced him to abort his attempt to engage the B-29 at 32,000 ft but the Ki-102 prototype and pre-production aircraft on test continued to be flown on B-29 intercept missions from Fussa by day and by night achieving some claims. Although about 215 aircraft had been delivered to operational units by the end of the war most of those units were still working up on the type and had little opportunity to deploy it in action. 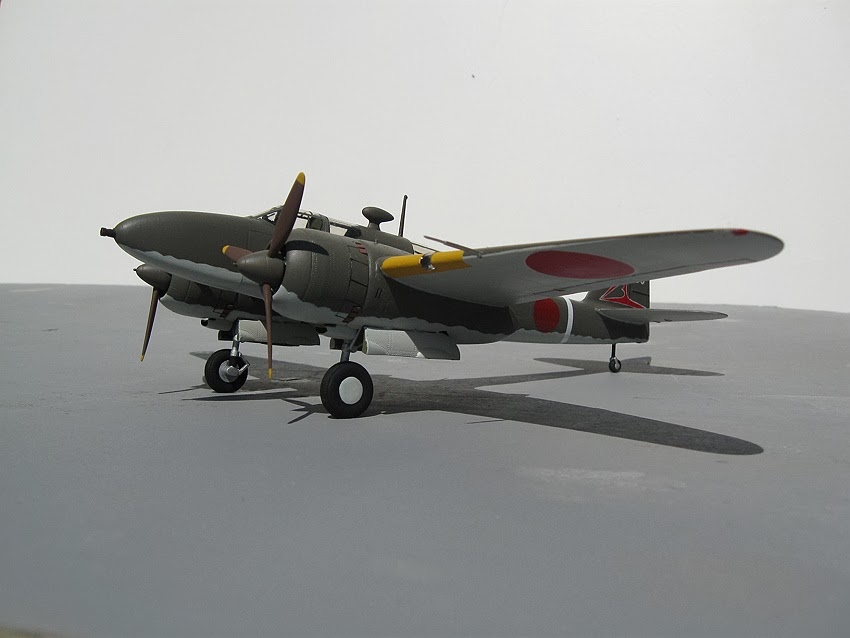 The nose-mounted 57mm Ho-401 machine cannon of the Ki-102 developed by Japanese Special Steel at the Nagoya Army Arsenal held 17 rounds in a circular caged belt similarly to the earlier  Ho-203 37mm weapon and could fire at the rate of 80-100 rpm with a muzzle velocity of 1,837 ft per second. As with the Ki-45 Toryu there were late war experiments to equip the Ki-102 with nose-mounted airborne interception (AI) radar developed from imported German technology, with the Hei version of the aircraft designed to combine the radar with oblique firing guns. 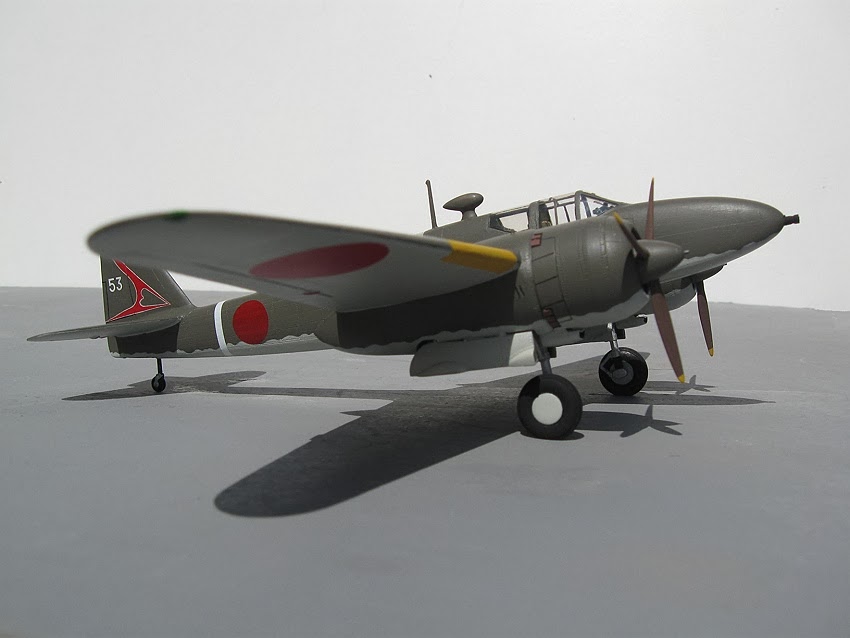 Despite its good looks the Ki-102 has not received much attention from mainstream model manufacturers in the past with only the Pavla short-run injection moulded kit and a KPL Models vacform in 1/72nd scale, a 1/48th scale vacform by Sanger (still available from Hannants), and two 1/48th scale resin kits from Triangle (Japan) and Czechmasters. AZ Models also announced a 1/72nd kit for 2012 which I understand was based on the Pavla mould with improvements, but it has not appeared yet. An essential one-stop reference to the Ki-102 can be found in Avions magazine # 140 (November 2004), which contains an excellent 15-page feature article by Kasuhiko Osuo translated into French with an impressive selection of rare and unpublished photographs, several showing the aircraft in unit markings, internal schematics and photos, 1/72nd scale plans, four colour profiles and cover art. In addition to online reviews there was also a useful build review of the Pavla kit by Peter Fearis in the June 1997 (Vol. 3 Issue 6) Scale Aviation Modeller International magazine. 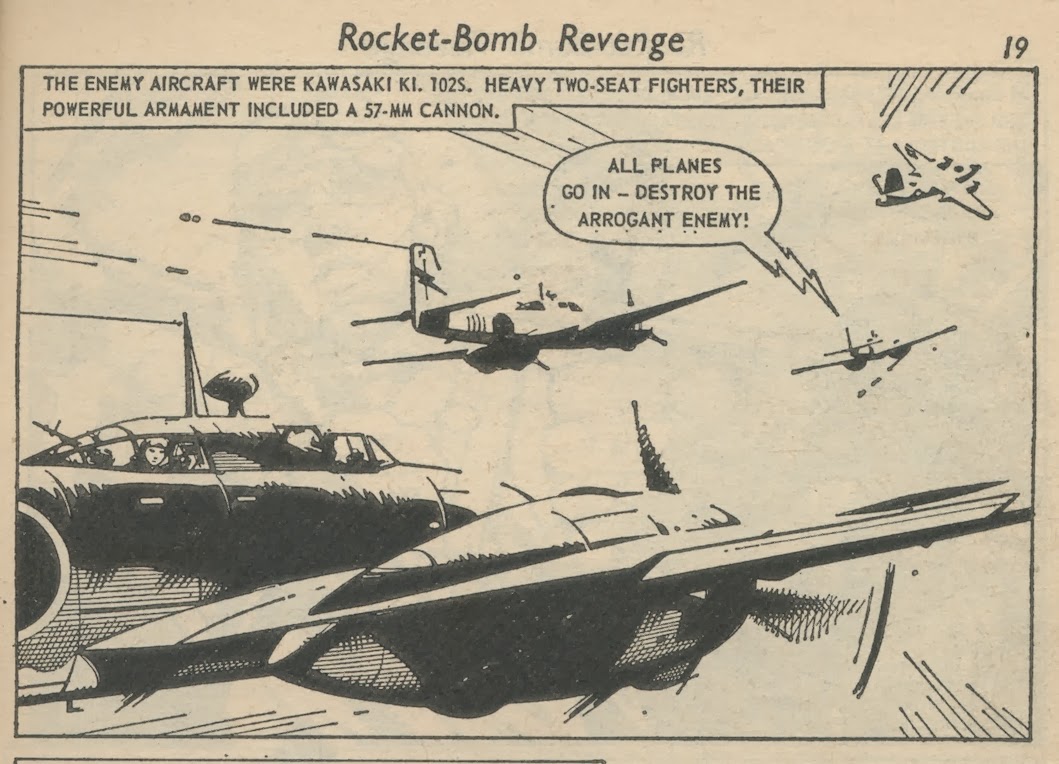 The Ki-102 first loomed into my own consciousness when it was memorably illustrated by Ian Kennedy in the Air Ace Picture Library's # 250  'Rocket Bomb Revenge' way back in 1965  (for 1'- one shilling = 5p!). In this stirring but improbable tale a trio of the Kawasaki fighters jump veteran Texas flyer Captain 'Buzz' Marlow's B-26 Marauder 'Honeychile' 'somewhere over the Pacific'. After  a brief duel in which one of the Japanese attackers is shot down by the Marauder's mid-upper and tail gunners they eventually force the B-26 to ditch in the sea by separating the starboard engine nacelle from the wing with a 57mm shell. The artist/writer were perhaps influenced by Lt Shimamura's claim to have blown the engine off a B-29 with the 57mm in June 1945 during another  Fussa-based Ki-102 intercept sortie. The guest appearance of this type in Air Ace Picture Library was unusual and perhaps the result of the real Ki-102 featuring in one of the aviation magazines of the time but so far I have not been able to make an obvious connection.

Believe it or not no fewer than three examples of the Ki-102 Otsu were taken back to the USA from Japan after the war, numbered as FE-308-FE-310, but sadly two of them were scrapped in 1946 and the third in 1950. More on the Ki-102 and other Kawasaki twins in due course.

Hats off to John on a superb job. This has always been one of my favorite planes. Maybe some day it will be released by one of the major manufacturers as an injection molded kit.

Inspiring work to bring such a plane to real life. I have enjoyed the works of others on this website.

Thanks Nick and of course John, for bringing the aircraft to us and for his superb modelling skills.

I especially liked the extract from the comic book - I used to buy these purely for the illustrations this artist rendered and the accuracy of the artwork - though some of the stories themselves were at best 'iffy'.

Ian Kennedy was certainly the best of the Fleetway series artists for aviation subjects and he had a fine eye for illustrating 'proper' aircraft and an interesting technique of using 'white space' to suggest form. For anyone interested in tracking them down I can provide a list of the titles that he illustrated for the Air Ace series.

Yes please re the list of titles Nick. From memory he did a couple on the RAAF and Spitfires in particular from memory - though the soggy mess I call a brain may have that wrong...it was a loooong time ago and I was only a teenager.

Thanks again John for sharing pix of your fine build.