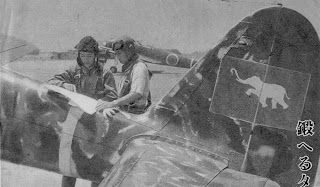 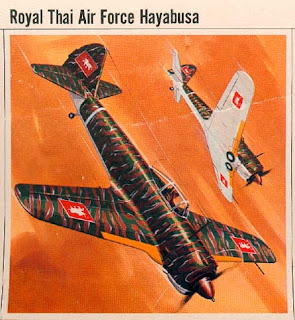 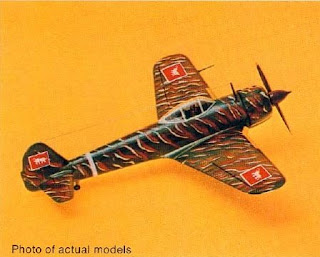 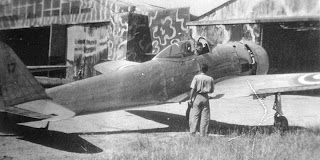 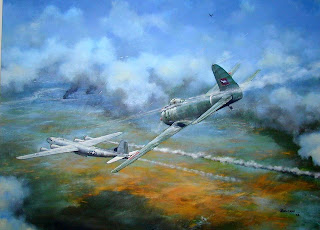 Prolific Japanese researcher Summer recently posted this image of a Ki-43 Hayabusa in Thai markings that gives us, perhaps for the first time, a clear impression of the camouflage pattern. Back in 1970, Richard Ward's profile in the Aircam Aviation Series No.13 'Nakajima Ki.43 Hayabusa I-III in Japanese Army Air Force - RTAF - CAF - IPSF Service' (Osprey Publications Ltd) depicted the aircraft in a stylised "herringbone" pattern that has been copied in many representations, including models, ever since.
Revell's 1967 box art for the Thai issue of their Hayabusa kit also reflected this idea, although quite anachronistic for the Ki-43 I represented by the kit (of which more anon). The photograph shows a much more random pattern of at least two colours, sprayed at close range over the natural metal. Some depictions represent the glimpses of the natural metal surface as deliberately applied swirls of light grey but I don't believe that to be the case.
At the end of the war the camouflage was stripped from some Oscars and the pre-war Thai roundels and rudder stripes were applied. On these aircraft the fabric covered control surfaces remained in their original camouflage finish. When L A Manwaring of the Royal Corps of Signals visited Don Muang airfield in 1945 he described the Ki-43s as "Natural metal overall with Thai Air Force markings" although noting that "some of these fighters still wore their Japanese green finish". A photograph taken by Manwaring (and reproduced here) shows a Ki-43 II late production Hayabusa, apparently crudely stripped of paint to leave a dull, stained finish. The ailerons and elevators appear to retain their former camouflaged mottle. The entire rudder is painted in Thai colours and the aircraft has large Thai roundels on the upper surfaces of the wings. A small black (?) number 17 (or perhaps a Thai character) is painted on the fin. The Hayabusa retains its aerial mast which appears to be painted black and white.
Image credits: ©Summer 2008; © Osprey Publications Ltd 1970; ©Revell Inc 1967; ©L A Manwaring 1969; ©RTAF Museum 2003
Posted by Straggler 脱走兵 at 12:44

Is there any reason to believe the long accepted camo color combination, used on the Thai Ki.43-IIs (a dark green and dark brown sprayed over natural metal) is in error?