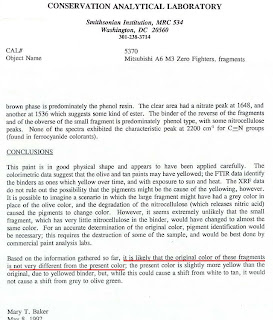 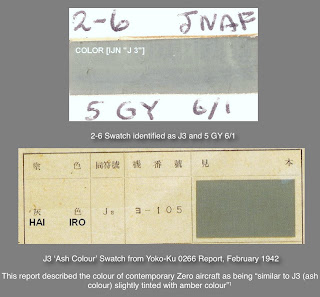 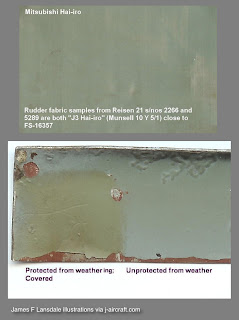 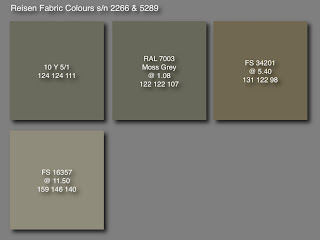 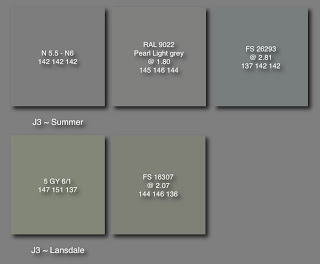 Thanks for your excellent summary of a very interesting issue.

The model was photographed under tungsten illumination with a custom white balance correction. Undiluted Tamiya XF-76 was used for the metal surfaces and XF-12 IJN grey for the fabric surfaces. I believe the result takes into account the desaturating and lightening effects of aerial perspective on the color evidence from the relic aircraft fragments and from contemporary B&W photographs.

What do you think?

I think your website deserves to be better known! What a superb themed collection. I should like to link with permission.

XF-76 is a reasonable choice as it seems to represent an attempt to determine the original colour from the known extremes as related here and is close to the original pigments when mixed. Bear in mind the colour shift over time is probably yellower + darker and the green may be illusory. I'm currently leaning towards duller greys with less green but I realise that may seem counter-intuitive to recent trends.

Thank You for continuing this series...

Hi
I'm certain you're aware of historic issues around defining PC10 shades. Documented pigments used were yellow ochre and lamp black. Mixed in enamel binder they appeared green (this happens with humbrol mixes too), but anecdotally as cellulose dope appears brown/er. This manifested as different shades on metal panels and fabric, especially as the fabric weathered. I wonder if the same bases with ash grey pigments account for colour shifts on metal vs fabric on Japanese aircraft.

Thank you for that Conrad. I'm familiar with PC10 but in essence it was intended as a khaki drab - a green-brown. PC10 itself underwent specification changes during 1914-18 and arrived in Japan via Sopwith, influencing both Army and Navy early colour schemes. If you don't already have it Bruce Roberston's 'WW1 British Aeroplane Colours and Markings' published by Albatros Productions Ltd in 1996 is worth seeking out for its discussion of PC10. An exploration of the many characteristics of yellow ochre pigments and how they interact with other pigments is a bit beyond a comment box but I'll try to blog in some more detail about that subject in future. It is a factor in considering the Japanese Army's late-war # 7 colour.

The paint for light metals applied to the Zero contained anti-corrosive 'yellow' pigments in similar fashion to RLM 02 (a complex paint) which made the basic colour a warm yellowish grey with slight (and subtle) olive undertone. The chemistry of the paint on the metal surfaces reveals the presence of plant resins of unknown type but similar to urushi, the Japanese art lacquer. Plant resins generally have an amber tone and further brown with age as do pure nitrocellulose binders. The fabric dope was a more neutral grey pigmented cellulose acetate butyrate, almost certainly promulgated on the J3 standard but not requiring the same anti-corrosive properties as the metal paint. Characteristics of this type of dope are that it is clear rather than amber in tone and does not readily yellow with age. The difference in colour appearance between the metal airframe and the cloth-covered surfaces on the early Zero relates more to different paint/dope chemistries and to different application methods rather than an intended difference in paint colour per se. Age related degradation tends to emphasise the difference.

Thanks again for commenting.
Regards
Nick

Thanks that's very thorough!
Ash (in English), is also a tree, noted for greyish bark. In sure there is a strong cultural theme with colours referenced to natural objects in Japan. It would be too much to think ash is ambiguous in Japanese language too.

Thanks Conrad. As far as I can tell the different forms of the Ash tree in Japanese have different characters to the 'ash'(灰) which is both a colour and burnt debris. I cannot discern the same connection that exists in English. The English "Ash' in reference to the tree derives from the Old English 'aesc, in turn derived from a Proto-Indo-European word for 'tree'. It also described a spear, as Ash was found to be good for making the shaft.