One Man's Justice by Akira Yoshimura 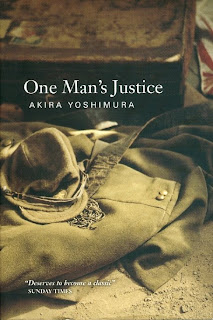 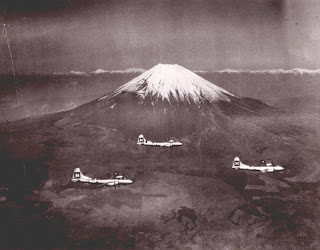 Wandering off topic just a little but Akira Yoshimura's novel 'One Man's Justice' may be of interest to readers. It tells the story of Takuya, a former officer in the Anti-Aircraft Command and his attempt to avoid arrest and prosecution in post-war Japan for his involvement in the execution of downed B-29 crewmen. The dichotomy of personal responsibility versus unlawful orders is explored as well as moral questions about the bombing. There are long "flashbacks" to the events of the war but essentially the novel is not revisionist or apologist.
The passages describing the B-29 offensive and the air defence of the mainland are very well researched and accurate. The overall style of the translated book is spare, thought-provoking and direct, challenging perceptions and written from the viewpoint of a man conditioned by his environment and unrepentant about his actions. Official policies towards prisoners and ambivalent orders which senior staff later distance themselves from are the focus of the book. The reviews of the book at Amazon are comprehensively written so no more elaboration is required here. Link is in the sidebar.
From a very different perspective of similar events, Raymond "Hap" Halloran's 'Hap's War' is a factual account by a B-29 crewman whose aircraft 'Rover Boys Express' was shot down over Japan in a head on attack by a Ki-45 Toryu. The story of his subsequent capture, imprisonment, treatment and eventual reconciliation make sobering but compelling reading.
Japanese Monographs also relevant to the B-29 offensive against Japan are # 23 'Air Defence of the Homeland' (1956) and # 157, 158 & 159 'Homeland Air Defence Operations Record' (1952) all of which provide a detailed account in English of the Japanese defensive strategies, systems, methodologies and units involved, and which will be explored here further in due course.
Image credit: Book cover ©2009 Canongate; Photograph 314thBW/19thBG via SCMH.
Posted by Straggler 脱走兵 at 15:30

This makes me think of the James Dickey novel "To the White Sea". It's a fictional account of a B-29 gunner whose aircraft is shot down over Japan. Dickey is most famous for writing the book "Deliverance", and is a Poet Laureate of the United States. He served as a B-29 gunner during WWII.

Hi Bill, thanks for that information. I was not aware of that novel and will definitely try to get it - sounds most interesting. Kind regards, Nick

May I join your trek slightly off-topic, and recommend Gordon Forbes' riveting novel, "Some Go Home," which details the lonely existence of a USN Privateer squadron near the end of WWII, each overloaded aircraft making long solitary patrols. Memorable characters, some very funny moments, and the best dialogue of any war novel I've read. It does not glorify or celebrate war, and doesn't contain a hint of sentimentality. It's old by now, but it will always be a great read.

Thanks Mark! That's another one to look out for. It sounds very interesting. There are some real literary gems out there but so many sadly forgotten. For the love of flying and thoughtful, richly illuminating prose which takes you into the cockpit with him I recommend Terence O'Brien's (factual) trilogy 'Chasing After Danger' (Blenheims & Hudsons), 'Out Of The Blue' (air-ground liaison with the Chindits) and 'The Moonlight War' (special ops Dak pilot in SEAC). Marvellous books.