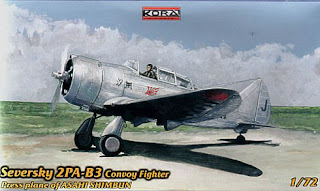 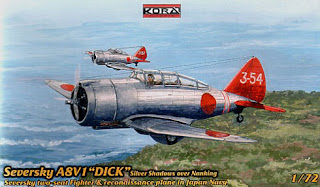 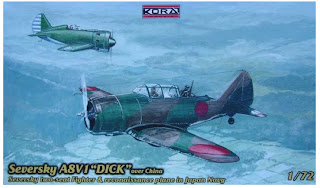 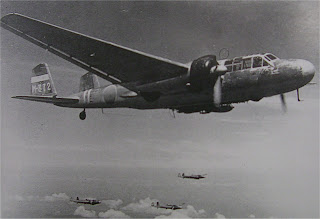 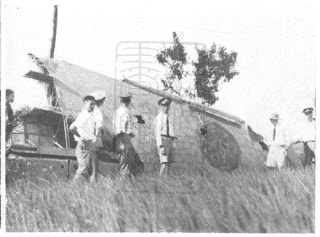 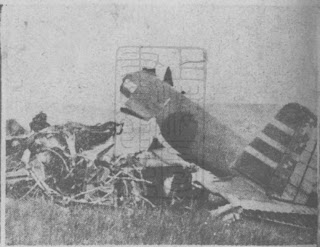 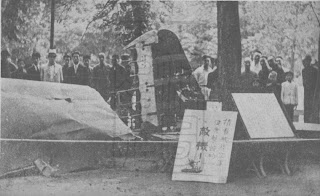 Something of a surprise from Kora are a trio of 1/72nd resin kits for the aircraft exported by Seversky as the 2PA-B3 and accepted for operational service by the Imperial Japanese Navy as the A8V1 Type S Two Seat Fighter. The three kits released are 72 121 'Seversky 2PA-B3 Convoy Fighter Press plane of Asahi Shimbun', 72 122 'Seversky A8V1 "Dick" Silver Shadows over Nanking' and 72 123 'Seversky A8V1 "Dick" over China'.
The history of this type in Japanese service is obscure and not covered in any detail in the main English-language references for Japanese aircraft. The aircraft were supposedly imported as a result of Japanese anxiety over escalating losses for their unescorted strategic bombing raids with Type 96 G3M bombers deep into China from bases in Formosa (Taiwan) which had begun in 1937. The purchase contract for 20 Seversky 2PA-B3, c/n 122-141 had been negotiated secretly but was to cause controversy in the USA and subsequent difficulties in Serversky's relationship with the US government and military. Sources differ on exactly when the aircraft were delivered, but it must have been at least prior to October 1938 (see below).
The photographs above, from official Chinese archives, show the wreckage of Type 96 G3M bombers shot down during these raids. The Seversky two seat fighters were to be used as long range escort aircraft with forward firing guns and the observer equipped with a hand-held machine gun. However when they arrived and were tested the Japanese were disappointed with their performance, climb rate and agility in the air. There does not seem to be any record of them being used in the long range bomber escort role for which intended but instead they were relegated to a reconnaissance role over central China with the 12th Kokutai, operating from bases around Nanking. Possibly the successful development of the Zero-sen as a long range fighter was also a factor in their demise. Unfortunately little has been documented about their operational use over China. Information welcome! Kora's kit contains tail codes for '3-54', 3-57' and '3-58' all in natural metal finish with red tails and red-bordered white rear fuselage bands.
Expecting to encounter these aircraft still in service they were given the Allied reporting name "Dick", but by that time they had long been withdrawn from service. Two of the aircraft were passed on to the Asahi Newspaper company to become Shiokaze-go J-BAAN and Umikaze-go J-BAAQ and a third was given to the Tokyo Nichinichi Newspaper company. J-BAAN was registered in October 1938 and J-BAAQ in March 1941 but a registration for the Tokyo Nichinichi Newspaper aircraft cannot be confirmed. It is a pity that Kora's Asahi Shimbun kit contains decals only for the single version Shiokaze-go J-BAAN.
The third kit, in camouflage with deployed rear gun and in combat with a Chinese I-16, as 'Seversky A8V1 "Dick" over China', has not been examined.
The Kora Severskys are welcome as the type is overdue for kitting and an essential addition to any collection of China Air War models but I wish it had been a mainstream plastic kit released in a single edition with optional parts and decals. The kit itself is typical of a modern resin, with parts breakdown similar to a plastic injection molded kit and containing a vacform canopy, a small brass photo-etch sheet and photographic film instruments. A full colour painting guide is included, together with a sheet of Kora's somewhat fragile decals for a single option.
Acknowledgement: Thanks to Ryusuke Ishiguru for additional information.
Image credit: Box art ©2009 Kora Models; Photographs ©2005 Shanghai Library Archives
Posted by Straggler 脱走兵 at 10:38

Thanks for the excellent - as always! - article.
These interesting kits from Kora represent a logical follow-up to their nice model of the Republic AT-12 Guardsman (available in US and Swedish boxings). I will order one, and would like to finish it as a recon bird of the 12th Kokutai.
Cheers,

Thanks for notice of the kit being available and for posting the box art and photo scans.

Hello Nick;
Thank You for the information on these exotic little items!
In particular, I am most interested in the Asahi Shimbun press version. I think it would display nicely next to civilian versions of the Ki-15 and Ki-36. Kind Regards, noel

Off topic I am afraid, but perhaps interesting. The G3M in-flight photo has a small detail just ahead of its windscreen. Is that just a scratch in the paint work, or perhaps some white script on the forward fuselage?