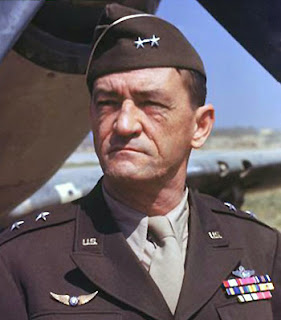 The facsimile memorandum below is a copy of a document issued by Claire Lee Chennault in the late summer of 1942. Although by that time the China Air Task Force (CATF) had already been formed the memorandum is still headed as being from the Headquarters of the Officer Commanding the First American Volunteer Group. The Japanese aircraft fighter types being engaged over China during 1942 were the Type 97 fighter (Ki-27 'Nate'), Type 1 Fighter (Ki-43 Hayabusa "Oscar'), the latter a relatively recent arrival but increasing in numbers, and to a fairly limited extent the Type 2 two-seater fighter (Ki-45 Toryu 'Nick'). The "beehive" referred to was essentially a multi-tiered Lufberry circle often flown above escorted bomber formations as much to maintain contact with the slower aircraft below as to provide an aggressive-defensive posture towards intercepting aircraft. 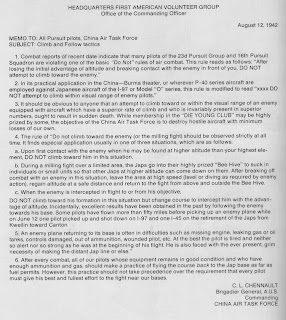 The CATF pre-dated the 14th Air Force and existed from July 1942 to March 1943. The nucleus of units under command consisted of the 74th, 75th and 76th Fighter Squadrons of the 23rd Fighter Group  and the 16th Fighter Squadron all equipped with the Curtiss P-40, the 9th Photographic Reconnaissance Squadron (formerly the 9th Photographic Squadron), officially equipped with the F-4 variant of the P-38 but prior to formal deployment operating ad hoc within the CATF with various modified P-40 aircraft including some P-40G variants according to Malcolm Rosholt*, and the 11th Bombardment Squadron equipped with the B-25 Mitchell medium bomber. 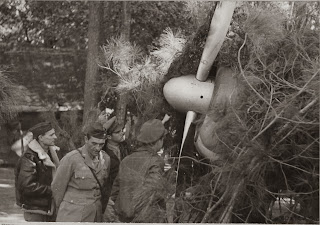 Japanese fighter units in China at around the same time consisted of the 10th Dokuritsu Hiko Chutai (DHC - Independent Air Squadron) and 54th Sentai (FR - Flying Regiment), both equipped with the Type 97, and the 24th Sentai equipped with the Type 1. The 10th DHC was expanded to two Chutai strength to become the 25th Sentai in November 1942, at the same time completing a transition to the Type 1 fighter (Ki-43-I) which had begun in May. It was expanded again to full three Chutai strength during the Spring of 1943. The 24th Sentai spent a relatively short time in China, arriving at Canton in July 1942 and leaving for Sumatra in September at the same time as the withdrawn 54th Sentai. The 33rd Sentai arrived the same month, newly equipped with the Type 1 fighter. In addition to these China-based fighter units other Japanese units staged into China throughout this period for specific operations from Indo-China, Thailand and Burma. The table below illustrates the China-based deployments. 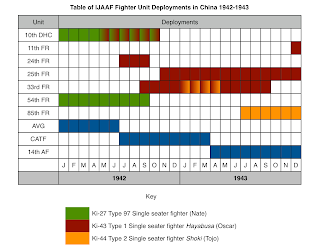 Interesting data in the table, Nick. Have you considered extending it on both ends of the time line?

Thanks. The table continues through 1942-1945 and is extracted from 'IJAAF Fighter Units in China 1942-1945' - a unit by unit overview and resource which I shall be making available in pdf shortly.

I hope to tackle the period 1937-1941 as a separate piece of work, the unit lineage and deployments being more complex