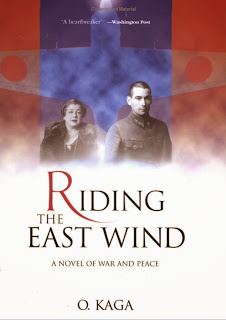 'Riding the East Wind' is a novel by Otohiko Kaga based on the real life personalities of Japanese diplomat Saburo Kurusu, his American wife Alice Jay Little and his son Ryu who became a test pilot at the Army Air Test Centre at Fussa (now Yokota). Photographs of the real Ryu and his American mother appear  on the cover of the book. The author was himself a cadet at the Junior Army Academy and writes with some insight to the activities of the IJAAF, covering the testing and service introduction of the Hayate (Ki-84) in the book, together with the evaluation of foreign aircraft types including the captured P-51 Mustang. For diehard  IJAAF aficionados it is worth hunting down a copy. There is an excellent and comprehensive review of the book here and other reviews here. 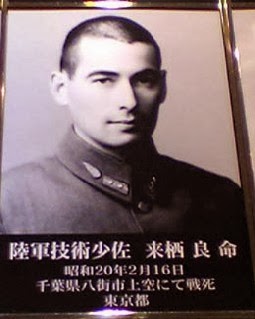 Ryo Kurusu joined Kawanishi Aircraft in 1940, aged 21, after graduating from Yokohama Industrial College where he played rugby, but was immediately called into the army as a technical officer cadet. He began flight training in 1941, was commissioned as a 2nd Lieutenant in July and was appointed as an aviation technical officer. A reportedly natural and excellent pilot, he tested various experimental, prototype and adopted fighter aircraft from Tama airfield, Fussa as well as participating in interception sorties during the air defence of Japan, attaining the rank of Captain. He also translated American flight and technical manuals into Japanese. Throughout his Army career he had apparently faced prejudice and discrimination because of his Caucasian appearance. When he was accidentally killed on 16th February, 1945 an official account was released which described him dying of wounds received in air combat. This stated that despite his fatal wounds, he managed to fly his damaged aircraft back to a safe landing and stagger bleeding to report the results of his sortie to his commander before falling dead. 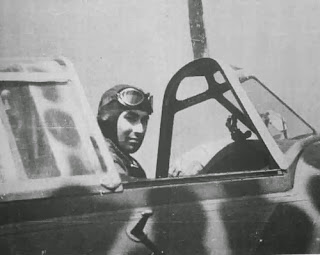 Ryu Kurusu in the cockpit of a Ki-51

In fact he had already returned unharmed from an air defence sortie in a Ki-84, claiming a kill, and was making his way back to his re-fuelled and re-armed aircraft when he was hit by the taxying Ki-43 Hayabusa of Lt Ryozaburo Umekawa and killed, his headless body continuing to run a few paces before collapsing according to eyewitnesses. Because of the circumstances his death was treated as occurring in action. Lt Umekawa was one of two pilots (the other being his commander Major Yoshitsugu Aramaki) who, as a  Warrant Officer, had attempted to intercept the Doolittle raiders in the second and third prototype Ki-61 Hien aircraft, 6102 and 6103, flying from Mito. Lt Umekawa was a test pilot with more than 14 years flying experience but Capt Kurusu had been running in front of his aircraft's blind spot as he prepared to take off. A visibly shocked and pale Lt Umekawa reported the circumstances of Kurusu's death to Maj Aramaki but no action was taken against him and the incident was treated as an unavoidable accident.

Alice Kurusu reportedly stated that she was proud that her son was able to die "for his Emperor and his country." His father Saburo chose an English inscription for his headstone:- "In peace, sons bury their fathers. In war, fathers bury their sons".  Ryu's two sisters both married Americans and had moved to the USA.

Is there any info (historical not in the novel) on the Allied aircraft types that Kurusu flew and his assessments of them?

Thanks for posting the mini-review, Nick.

Not that I'm aware of. There is Yoji Watanabe's 'Rikugun jikken sentoukitai' (Army experimental fighter squadrons - Green Arrow Publishing, 1999) but I don't know if it covers the testing of captured aircraft or even mentions Kurusu.

The work of the Test Centre at Fussa is tip of the iceberg stuff and there are clues and hints of some very intriguing operations but much of it, especially the air-to-air radar developments, is obscure or unknown.