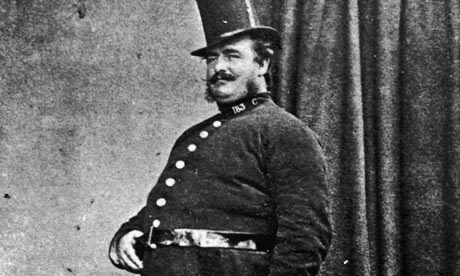 So, where are these mythical 'colour police'? They might wander, anorak clad and under cover, around the model shows but I've seldom seen anyone savage a model for colour inaccuracies online. Usually it is the opposite - "that look's great, here is mine" (some people simply have to hi-jack other peoples threads with pictures of their own models - it never seems to occur to them to start their own). I've witnessed and participated in plenty of arguments about colour, usually involving colour photos, and seen umpteen statements of the "I use xyz (paint) and it looks great" kind (a pattern emerges) but seldom if ever the stark statement "that colour is wrong". Maybe it is whispered elsewhere, in the far corners of the display halls, or in exchanges of poisonous emails bent on character assassination, but that is life rather than modelling. 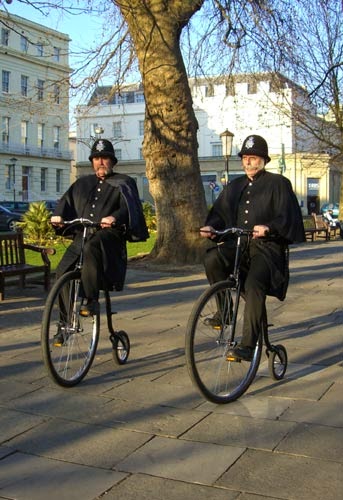 Colour policemen on their way to check a model

There are plenty of wrong and unconvincing colours on models though and it would be easy to be rude about them but there's a big difference between thinking it and saying it. Well, what about constructive criticism? - help the guy out. The trouble with that, and I have seen it on a well known American modelling hyper-site, is that the helpful critic is not just spurned by the model owner but likely to receive a barrage of booing from those ever-vigilant flash mobs who gather to proclaim that modelling is meant to be fun (let's state the obvious) and any attempt to pursue historical accuracy "sucks the life out of modelling". Joyless Modelling Nazi - JMN - joins "colour police" and "rivet counter" in the lexicon of contrived resistance to the pursuit of excellence and historical veracity. No, sorry, don't buy it. In my humble opinion those who bring angst to the forums are the very ones who carp snarkily about "colour police", "rivet counters" and JMNs, an exercise in reassuring themselves that their own models are not so bad and that their difficulty in appreciating colour let alone applying it to a model doesn't matter because they once knew a crew chief, blah, blah, blah. 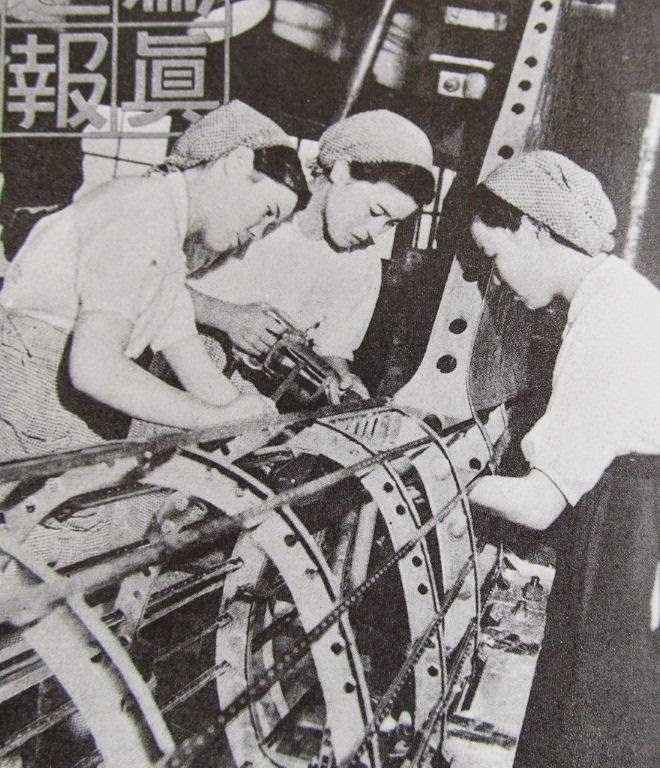 They can be counted on to intervene in any serious attempt to discuss aircraft, whether it is about colour or the shape and size of an oil cooler with their "two cents worth", usually a combination of sly innuendo against those who make them feel inadequate and a desperate plea for reassurance that their own approach to modelling is mainstream. The "Paint It Any Colour You Like" Brigade are far more likely to push their way into any serious discussion than anyone who might be described as a 'colour policeman', badge or no stinking badge. Oh, how tired they are of those long-winded discussions about the minutiae of colour, how scornful of such attention to detail - walk on by then, no-one forces you to read through those long-winded discussions or to make them even longer by insisting on adding your own statements of the obvious. Here's news (not really), I'm interested in the minutiae, technology and pedantry of colour, ready and willing to discuss those with anyone, but absolutely relaxed about what colours people might choose to paint their own models. An interpretative art form is just that. One can seek to inform it without dogma and observe it without judgement. And one can walk on by when the subject under discussion is of no interest to you personally. There are those who agonise over the precise shade of paint and those who don't. All are welcome - let's leave identity group labelling and condemnations to politics. 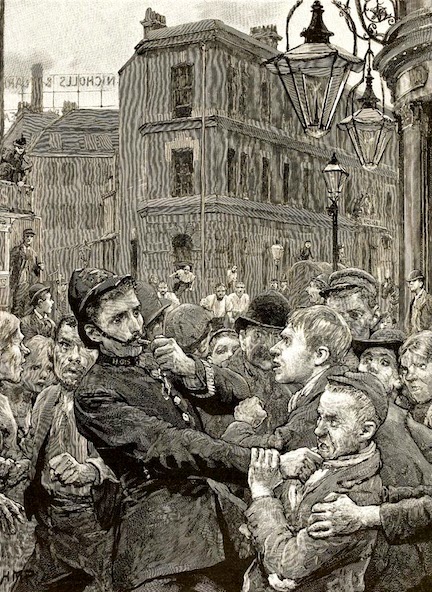 The long-winded discussion about RLM 83 soon descended into fisticuffs

Well, yes, but this polemic is judgmental, I hear you say. Yes, but think of it as gently pushing back. If one attempts to do that on a forum the moderators will probably step in, their radar apparently more finely tuned to reciprocations than to the indirectly snarky interventions that provoke them. So, what exactly are the pejorative opposites of 'colour police', 'rivet counter' and 'JMN'? The absence of those antonyms speaks volumes about the true nature of judgmentalism in modelling. 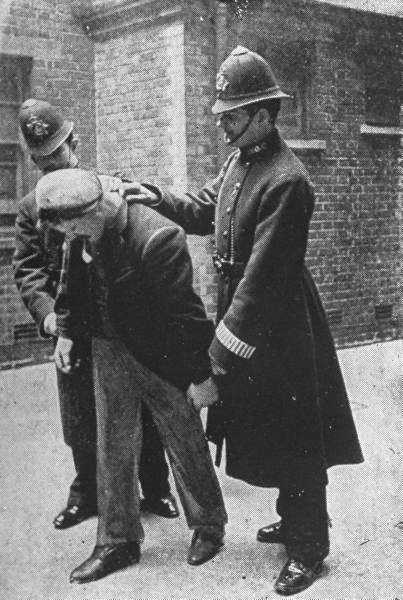 "You really thought you could get away with that colour on a 109? Come quietly son, you're nicked!"

Image Credits: from 'The Complete History of Colour Policing' by I.M Joshing (1907)

Well said Nick. Even in normal, every day life I find that people tend to believe their personal choice of being inattentive and disorganized somehow trumps my desire to be organized (here, clean up my self-inflicted mess!). People just don't want to think, or be responsible, so it's easier to say "do as you want"....

Hi Nick, my first thought was, 'Crikey, what side of the bed did you get out of this morning?' rapidly followed by, 'Who peed you well and truly off today?' but then I read the whole article again, and frankly I agree with all the points you raised!

Nailed it, in one Nick.

i know it's been said before but one of my thoughts as I lie dreaming is that I would just LOVE to back with a digicam and re-record in true colour (is there such a thing?)all the images we have argued about over the years and once-and-for-all prove what the colours actually were and silence the Ner-Sayers that seem to inflict every forum.....

I'll say one thing for your Blog: you make me think..! Well done and keep up the good work..!

....and Yes, I have more colour conumdrums than I can handle, too..!

Nick,
I participated in reenactments and living history programs at battlefield parks, historic sites, museums, etc. both as an avocation and vocation. During that time, in my own pursuit of "trying to get it right" I've been labeled a "stitch nazi".
Just thought I'd add that in to the lexicon so you won't feel alone. :)

And as Bryan said, one of the reasons I love your blog is that you make me think, and yeah, you did nail it in one sir.

Different parts of the hobby attract different people. So what? Sigh... there are many reasons I don't participate in forums, albeit I do read them for light entertainment.

Me? I know I love color. I am picky about color in many areas of life. Color brings me joy. So does that make me a policeman? Does being a paint freak and having way too many bottles of way too many paint systems make me an anorak? Always did love my anoraks. Sound garment those!

I say bring it on Nick, lots of and lots of color. I love your work and look forward to more.

As one who has gotten into trouble a good few times over for helping people with historical and technical accuracy issues, I know exactly where you're coming from. "Please give your opinion as long as it's sugar-coated" is something I find rather difficult at times.
I'd like to add one thing to that: people who post models on forums as asking for feedback. If they expect it all to be ooo's and aaa's perhaps they should choose a different target audience than one where colour police, rivet counters and JMNs roam free. Growing a thicker skin may be useful too.
On Facebook I've seen modeller groups where rivet counters are not allowed. Great, modellers who don't care about history: go there! I enjoy my alternate history sites too, very relaxing! But what-ifs are often frowned upon as a waste of time, how ironic. :)
Want to be a better modeller? Then embrace your colour police/rivet counters/JMNs. They share their years of research with you just like that - for free! Out of sheer passion for the subject. How wonderful is that? Where you find such service these days? But no good deed is left unpunished surely.
Want to build models purely for your own fun? Then build them for yourself. Keep 'em offline. If it's solely for you, why invite critique? How could it possibly add to your fun? O, but you want praise? Perhaps add a disclaimer to your post: "comments or praise only please". Or perhaps show them to your mum, wife or kids? :)

Anyway I'm rambling. Keep up the good work Nick! Know that there are plenty of people out there who truly love your input.

Thank you Nick, made me smile.

I guess im one of these colour police , although i only police myself. I will offer my advice ONLY if asked. I have myself been attacked for doing it wrong and that was at a contest of all places . built a 1/32 scale zero and painted it overall grey-green did some salt chipping then painted the topside the dark green ,so when you knock off the salt ,the grey-green shown through. was roundly critised and was told that was not right by several people.so I know from which you speak I thoroughly enjoy your site and make it my "go to" spot for answers .Keep nup the great work