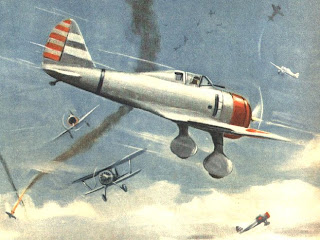 Leading Japanese researcher Katsushi Owaki announced today that official Japanese Army documents reveal that the Nakajima Ki-27 fighter (Allied code name 'Nate') "97-Sen" was factory painted 'ash green' ~ JAAF paint colour #1 'Hairyokushoku' (ash green colour). He has matched a paint sample from the only survivor at the Tachiarai Peace Memorial to Munsell value 2.5 GY 6.8/1.3
The closest FS 595b value is 34424 with a DE2000 difference calculation of 2.7 (2.0 or less = a close match) but it is greener in appearance. The closest RAL value is 7032 'Kieselgrau' (Pebble Grey) @ 3.67 but that is greyer and slightly more yellowish!


Camouflage colours to be used on the Type 97 were described as 'Tawny', 'Indigo Blue' and 'Green', probably indicating the JAAF paint standard colours khaki iro # 33, sei ran shoku # 28 and midori iro # 21.
In 1970 Rikyu Watanabe and Dr Yasuho Izawa described the painting of the Type 97 as follows:
"The airframe should be overall mei-hairyoku-shoku (light gray-green colour) - a glossy gray that has a very slight green tint."
Posted by Straggler 脱走兵 at 17:42

So would this be the color that I have sometimes seen referred to as "Rat Grey?" Also, would this color also have been used on other a/c like the Type 95 fighter, or only found on the Ki-27?

Not necessarily. Some Ki-27's were described by veterans as being painted "rat colour" (nezumi iro) but we don't know whether that was a popular description of the same grey as Hairyokushoku (ash green colour) - or more likely a different colour. It may have been a slightly darker, more brownish grey.

RAF personnel described Nates seen in Burma as "dirty grey" or "nondescript grey" but first hand memories from any Burma veterans reading this blog would be very welcome! .

The sample measured by Owaki-san is a warmer grey than the distinctly greenish grey of JAAF #1 Hairyokushoku. It is taken from a 60+ years old relic and therefore the appearance of the colour may have become browner and darker with age. The JAAF greys appear to have become warmer in appearance during the war, possibly as a result of the pigments and ingedients being changed to accommodate shortages. I will be posting more about this colour in due course.

Incidentally, the Japanese Navy manual for the famous Zero also describes it as being painted "hai nezumi iro" or "grey rat colour".

nice info about Owaki new frontier in the paint research. About the same Hairyokushoku I wonder is he took some deeper study. Maybe to put on the spectral analyze or at least to watch it under the strong microscope and optically recognize elements of pigment. That approach used a team of researchers in the '60 when they made study of French WW1 colors and results was very accurate and complete info about this colors.

The fractional Munsell values suggest that colorimeter equipment was used but I don't know for sure. Sometimes the measurements taken close to an artifact can appear different to the overall appearance of the whole surface in daylight. Often the measured value will appear slightly darker when compared this way.

Can you advice as to the color of the upper decking beneath the rear glazing on a Ki-27 Ko? I've carefully read all of your excellent articles on Ki-27 and Army interior colors, but couldn't find an answer. Should it be painted #3, or dark gray, or just black? Is it the same on Otsu models?

I don't think this is known for certain. The factory anti-glare paint colour used later by the IJAAF on the cowlings of types like Ki-43, Ki-44 and Ki-61 was paint colour standard # 32 Koku ran shoku (黒藍色 - black indigo colour). This was somewhat similar to the colour of an eggplant fruit or aubergine - a dark, almost blackish blue with very slight purple or blueish cast under some illumination.

It is more likely, I feel, that these parts on the Ki-27 were painted the same dark blue-grey # 3 as the interior.