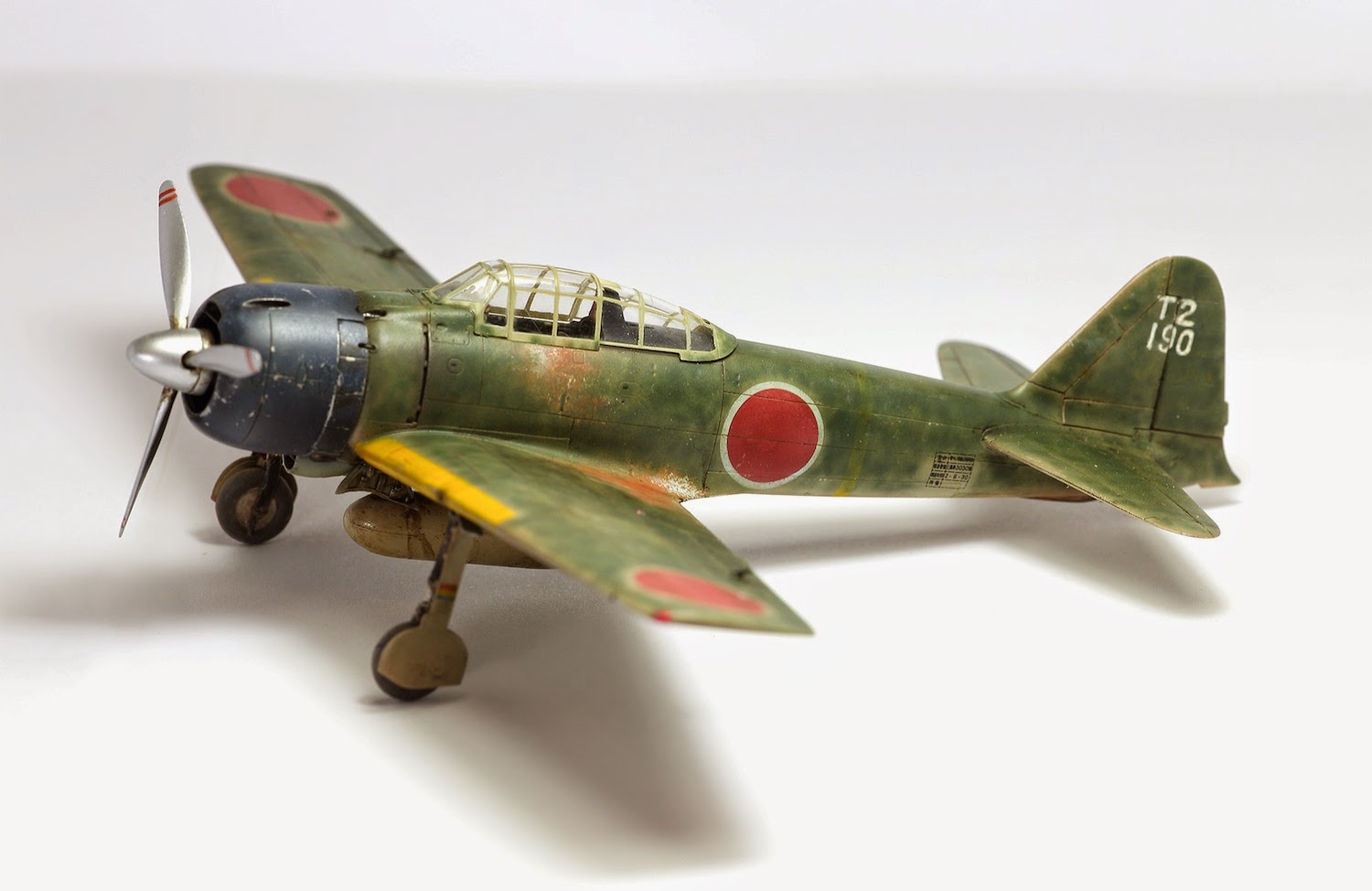 Another field camouflaged Zero completed from the 1/72nd scale Tamiya kit, this time 'T2 190' a clipped wing A6M3 Model 32 'Hamp' of the 204th Ku at Rabaul during the Solomons campaign of 1943, kindly contributed by Francesco Borraccino. The step by step build  process is here - in Italian but the pictures speak a thousand words. 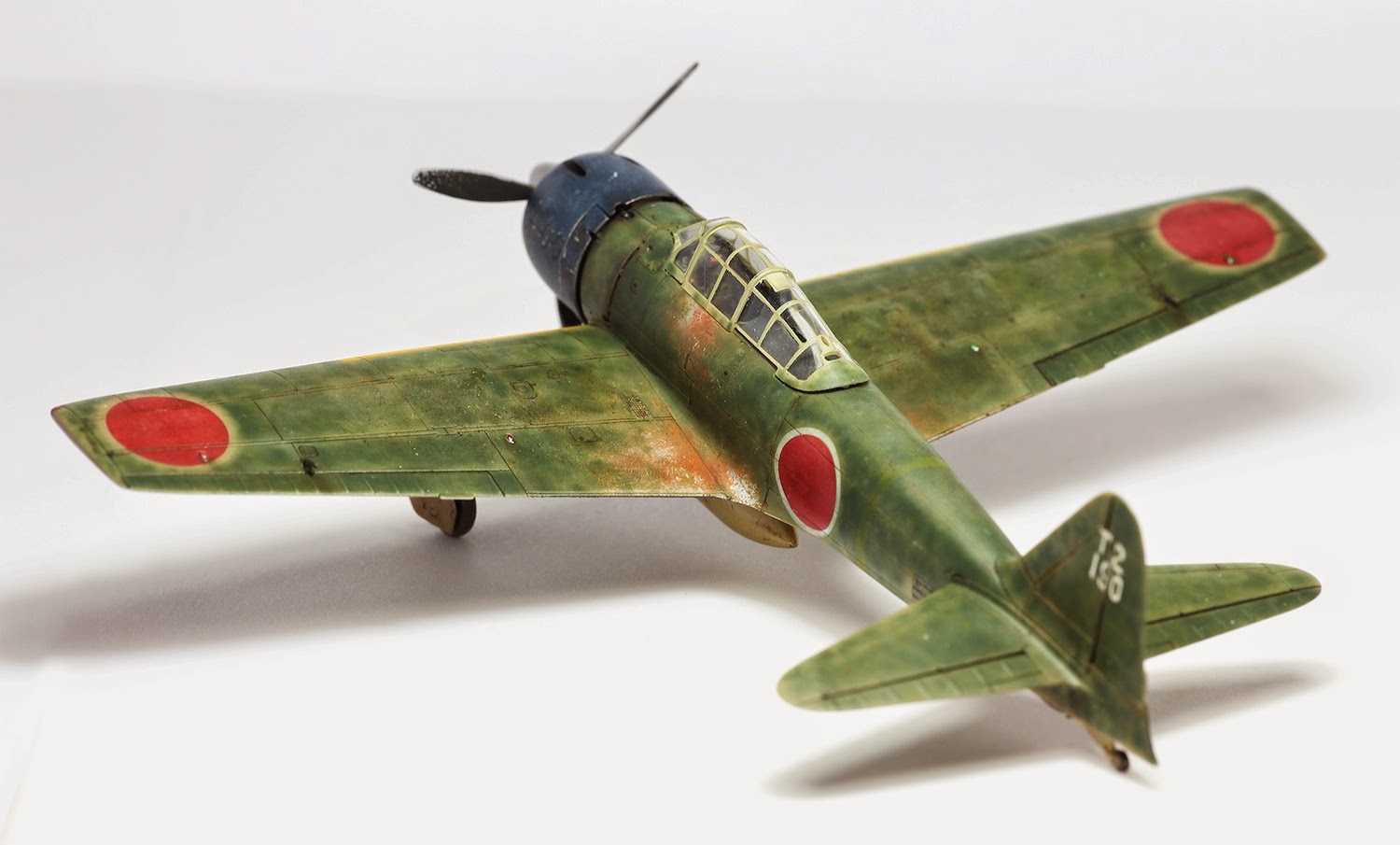 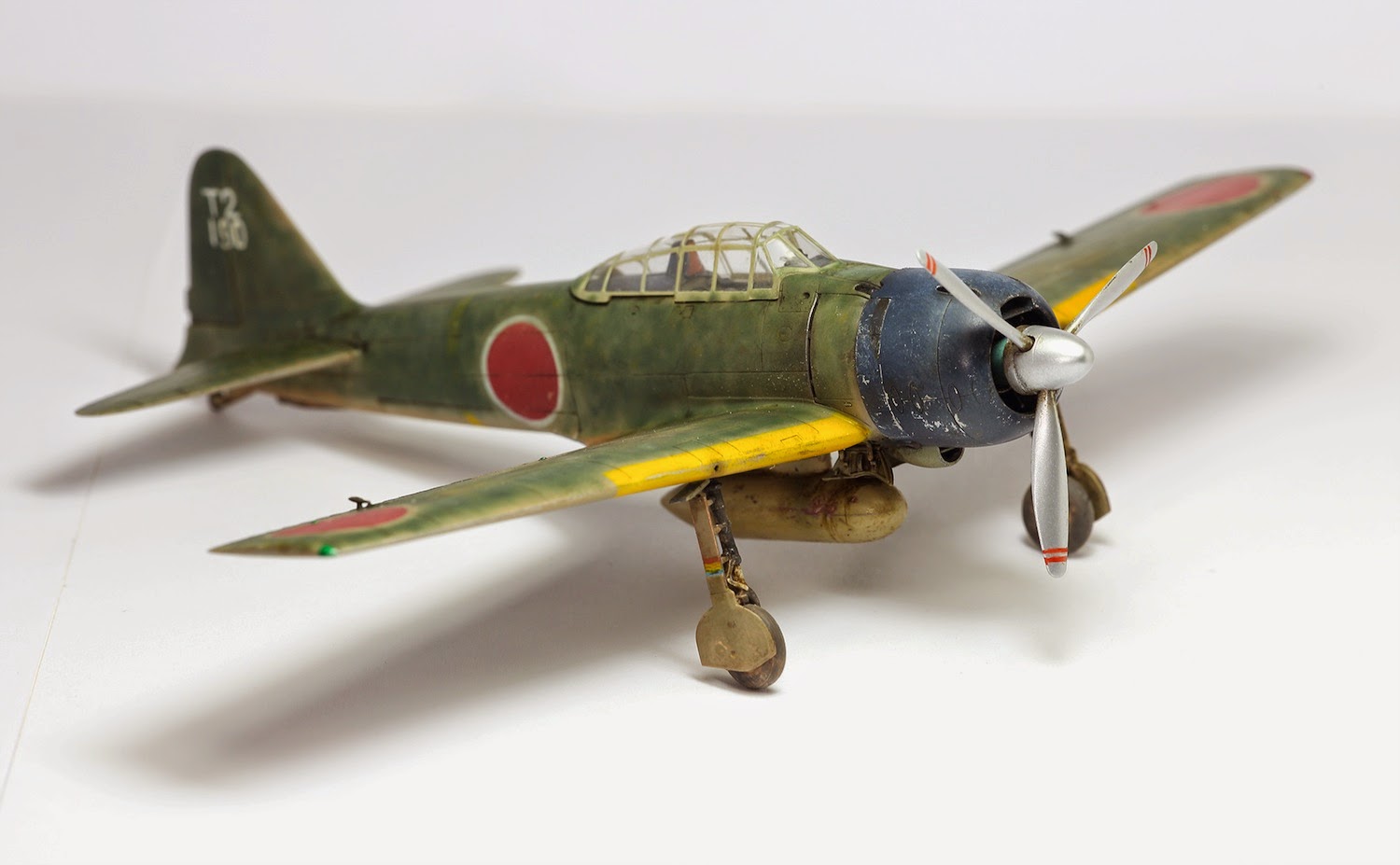 Francesco chose to depict a weathered aircraft with paint loss around the cockpit and wing roots revealing the red oxide primer coat. He also took some atmospheric 'historical' shots of his completed 'Hamp' model. 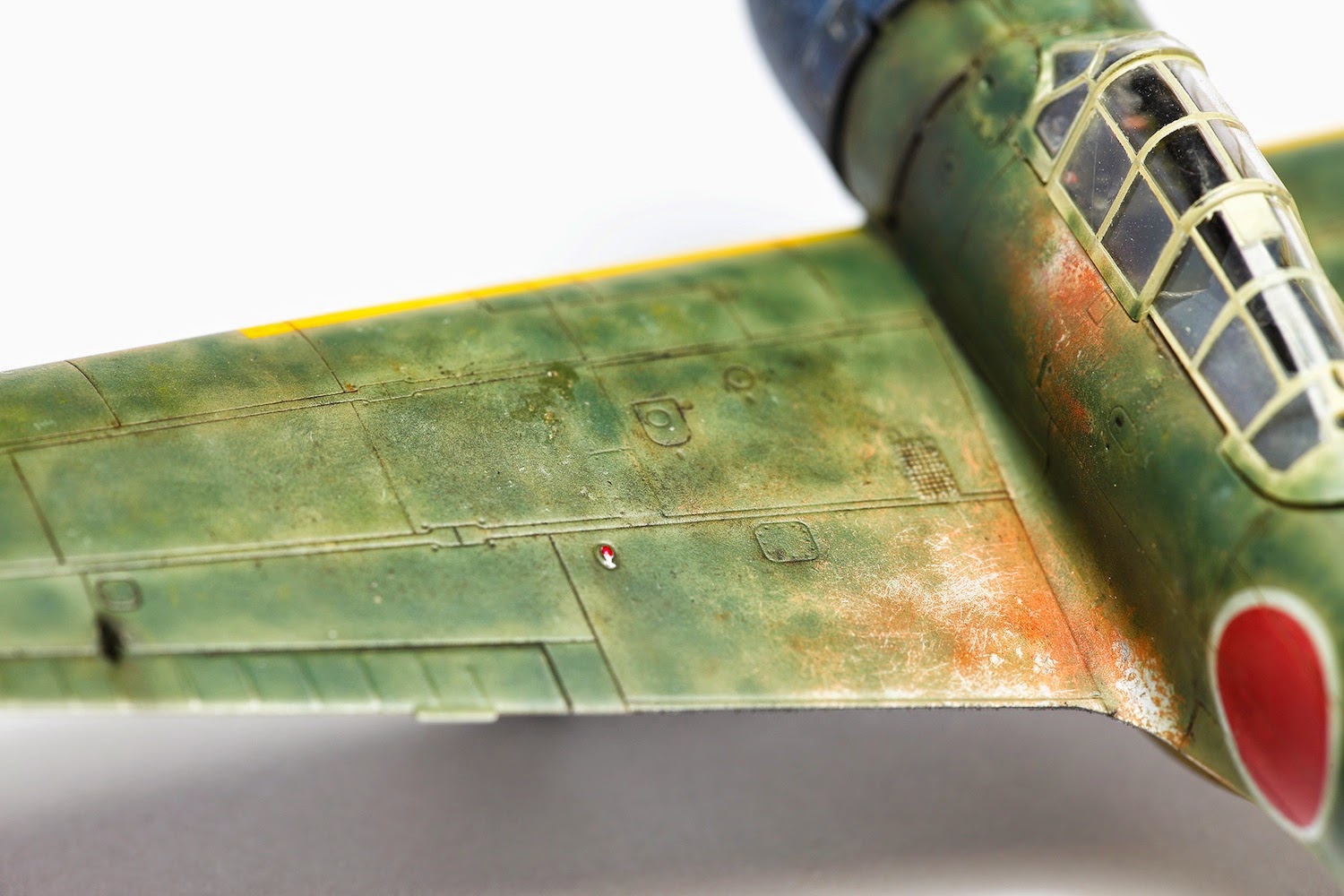 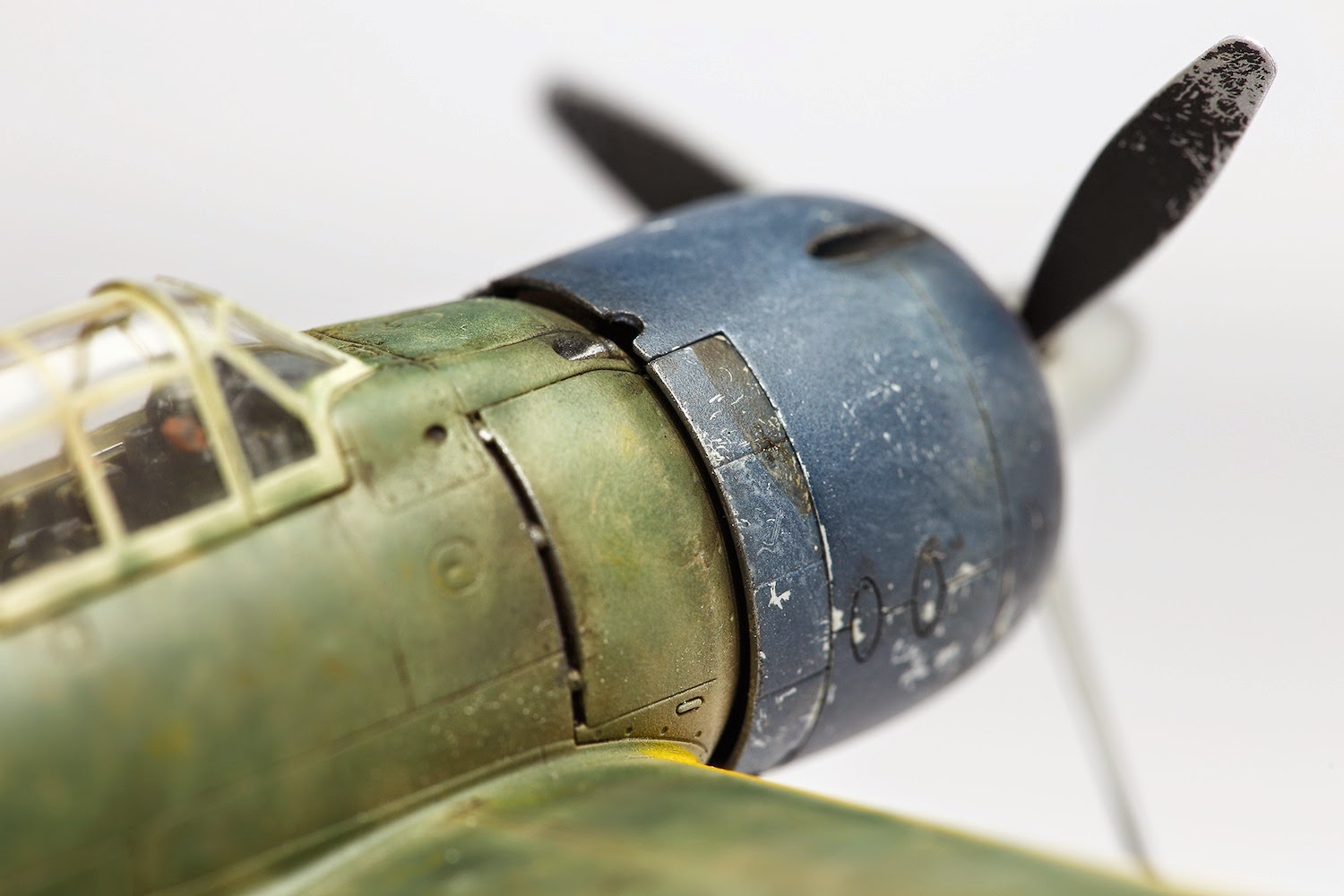 The field camouflaged schemes were non-standard and applied in many different patterns with different methods used. A veteran of the 204th Ku has described how dark green paint was roughly daubed over the plain factory finish and then smoothed out with petrol soaked rags resulting in the marbled effect of a dense mottle. The aluminium drop tank was finished in red oxide primer and grey as described in detail in an Australian intelligence report. 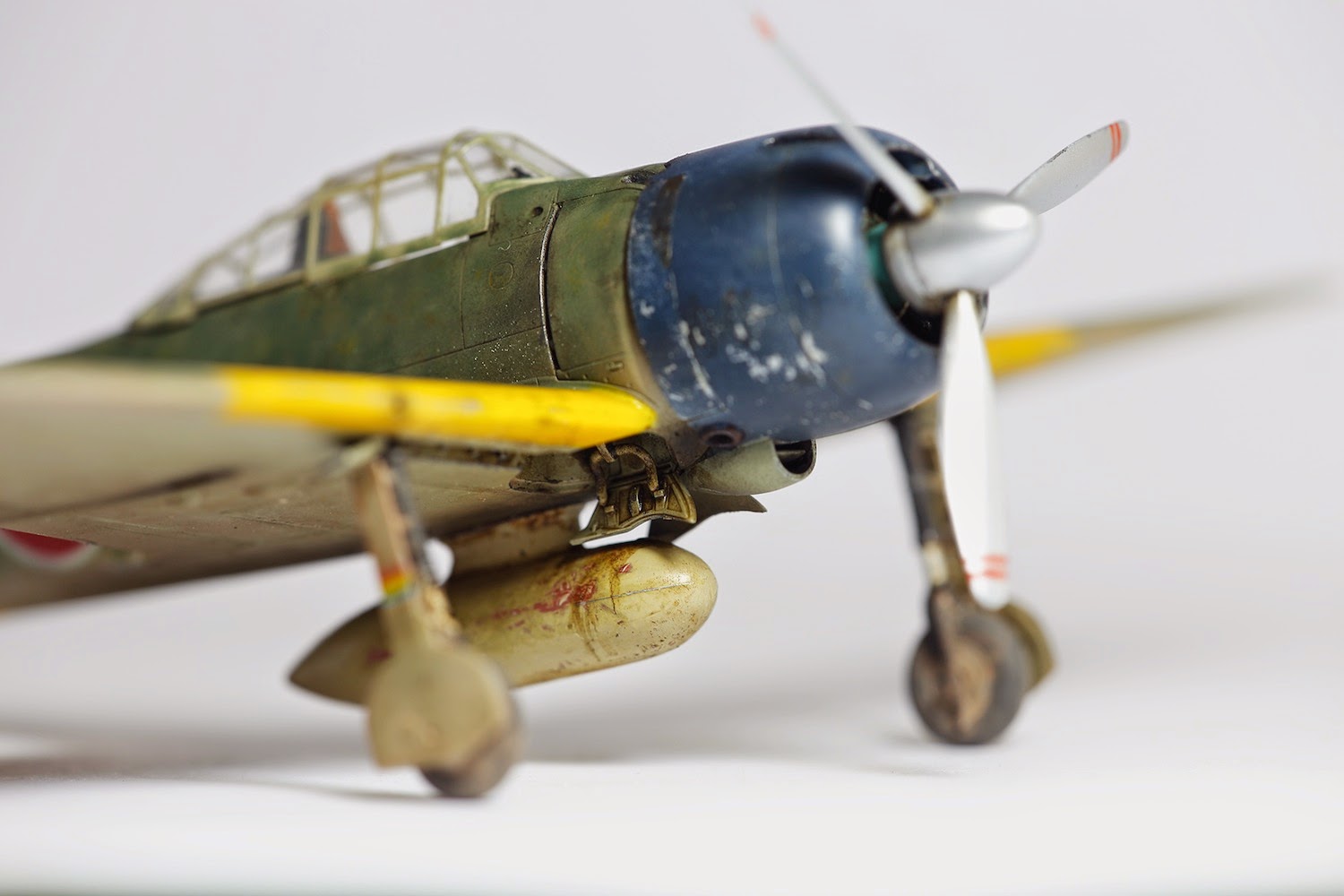 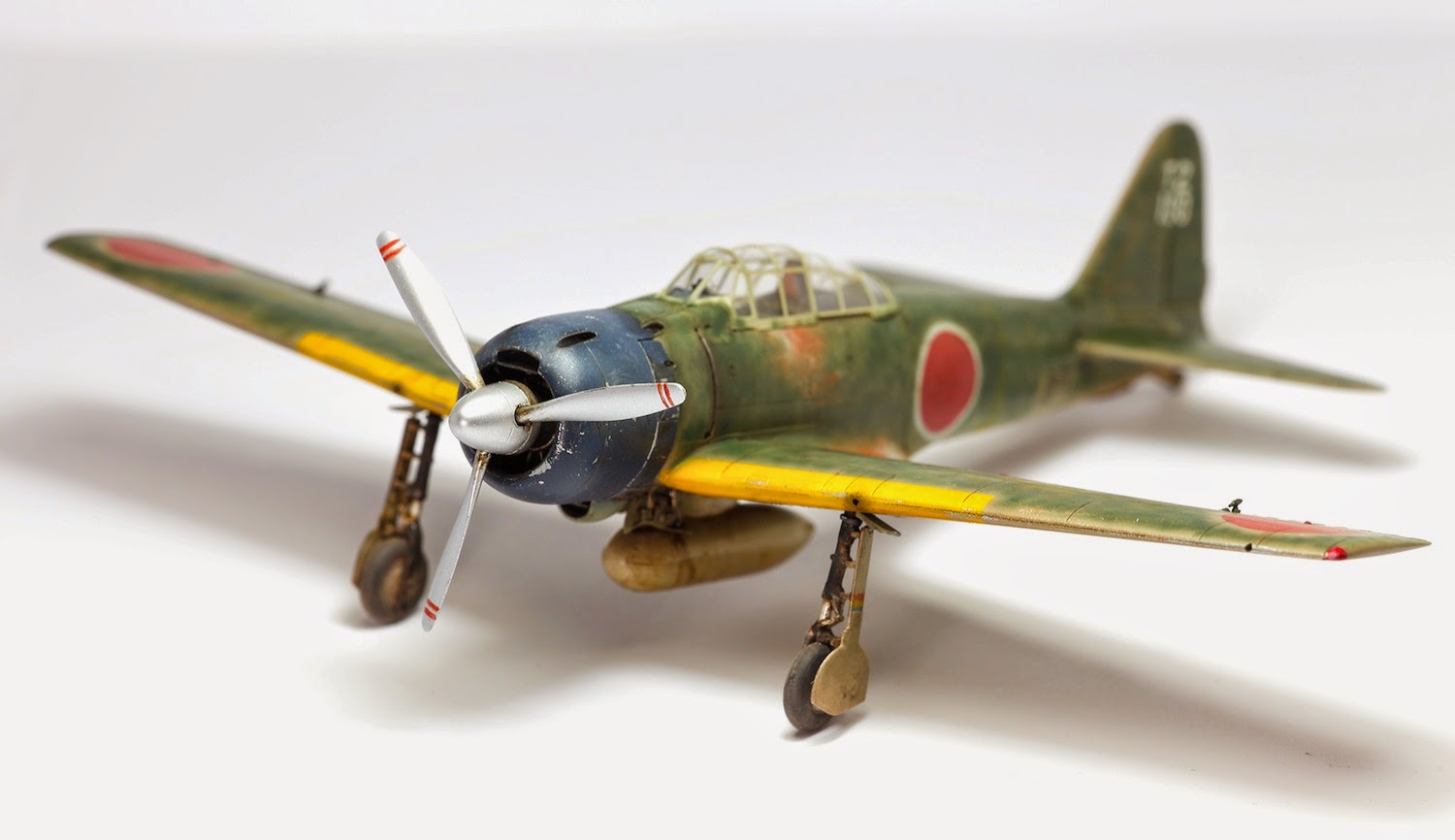 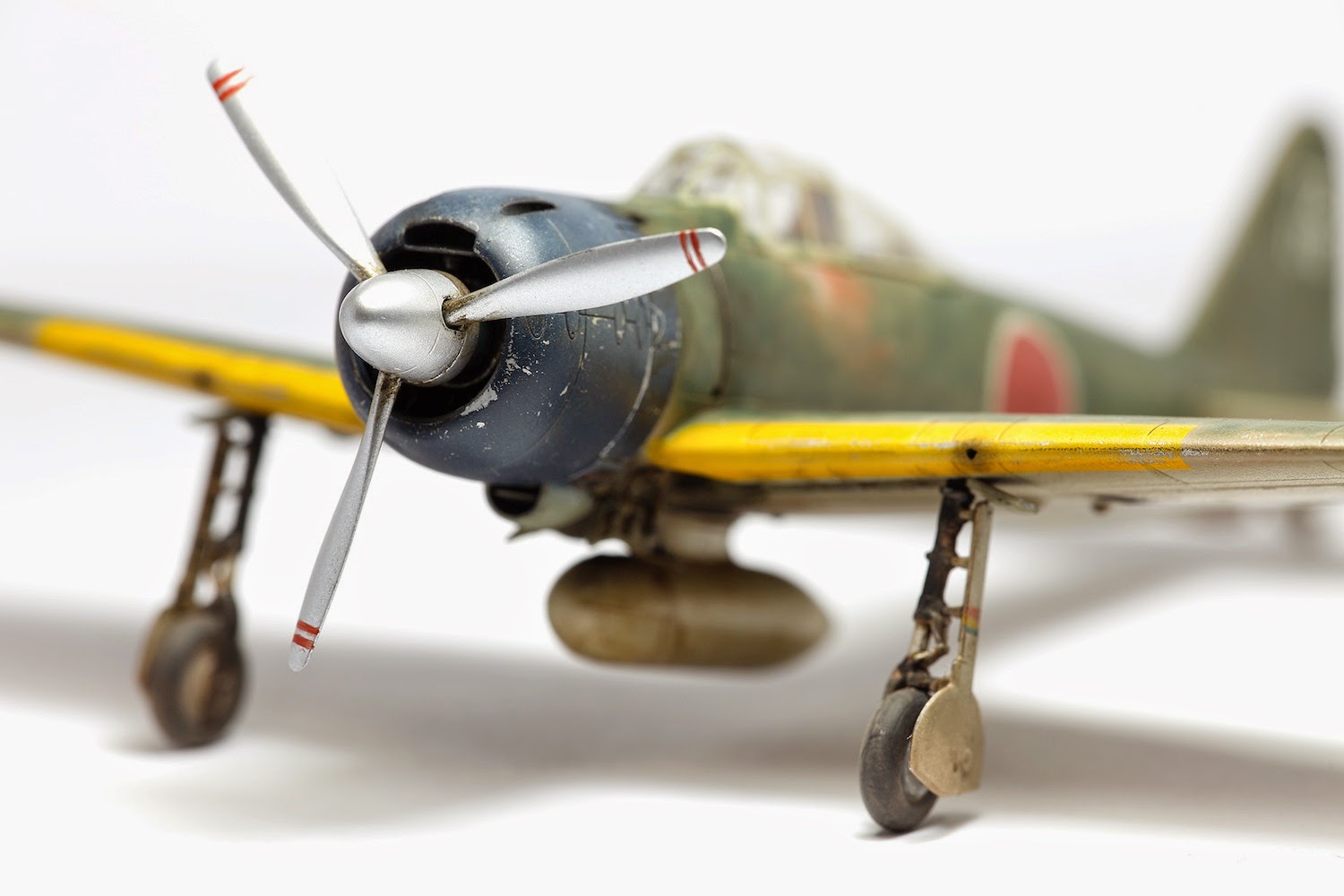 The clipped wing Model 32 originated from a design improvement for the A6M2 that was to become the A6M3 Model 22, incorporating a developed Sakae 21 engine - with two-speed, two-stage supercharger, down draught carb and re-geared 10 ft prop married to an A6M2 airframe. The intention was to improve high altitude and climb performance. However the flight testing demonstrated disappointing performance and the test pilots advised eliminating the folding wing tips of the A6M2. Doing this and fairing over the wingtips (the ailerons were modified too) to create the distinctive clipped wing resulted in other improvements - a better roll rate, reduced stick forces, faster level speed - so the  Model 22 (as originally envisaged) was shelved and the Model 32 ordered into production. There was initially some disagreement as to how to designate the modified design before it was settled on as Model 32. 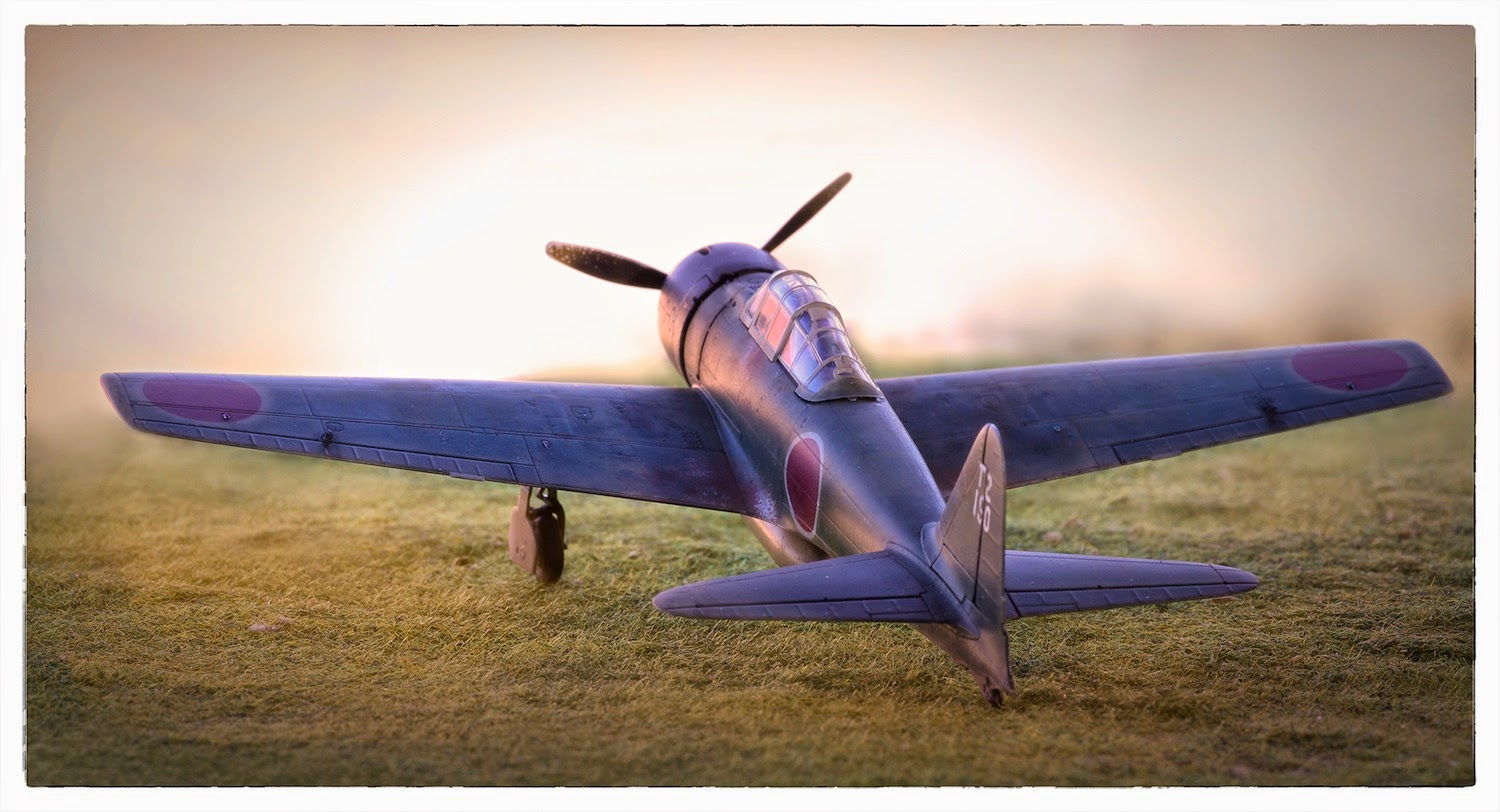 However most front line Zero pilots didn't really like the A6M3 Model 32 for various reasons and with the Solomon Islands campaign its limited range (22 gals less than the A6M2 and a heavier airframe) became a strategic issue forcing the use of the earlier A6M2 for longer range sorties. Operational requirements were then incorporated into the improved engine design with a reversion to the longer wing (without the folding tips) to accommodate fuel tanks in the outer section and aileron balancing tabs to reduce control forces on the longer aileron. The previously intended designation of Model 22 was then reinstated for this version, which is why the Model 32 and 22 were out of chronological sequence. 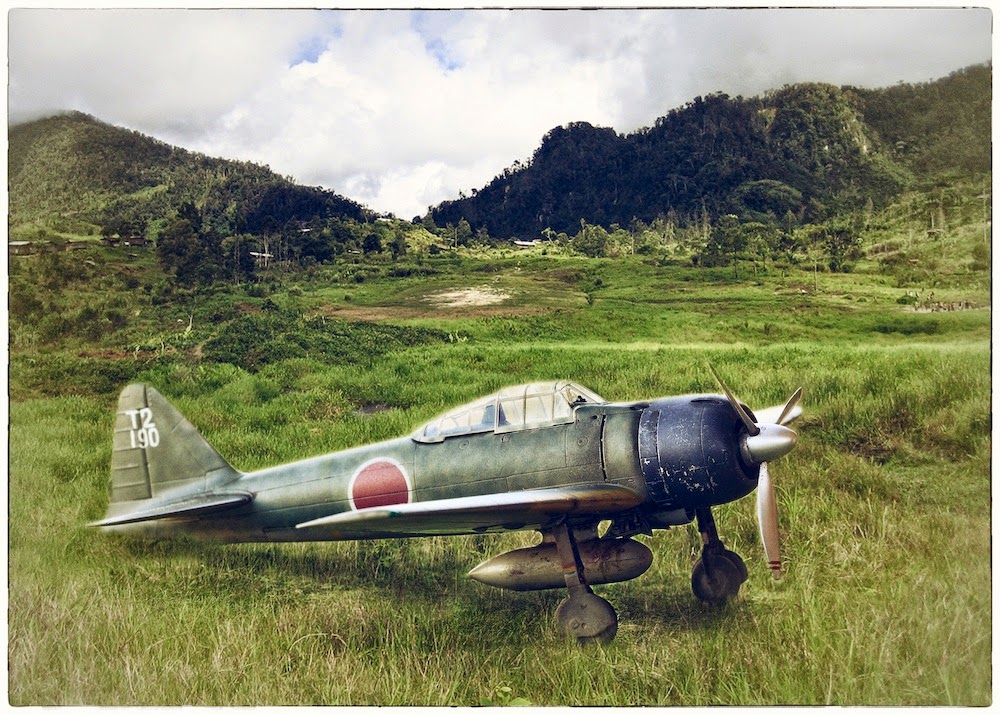 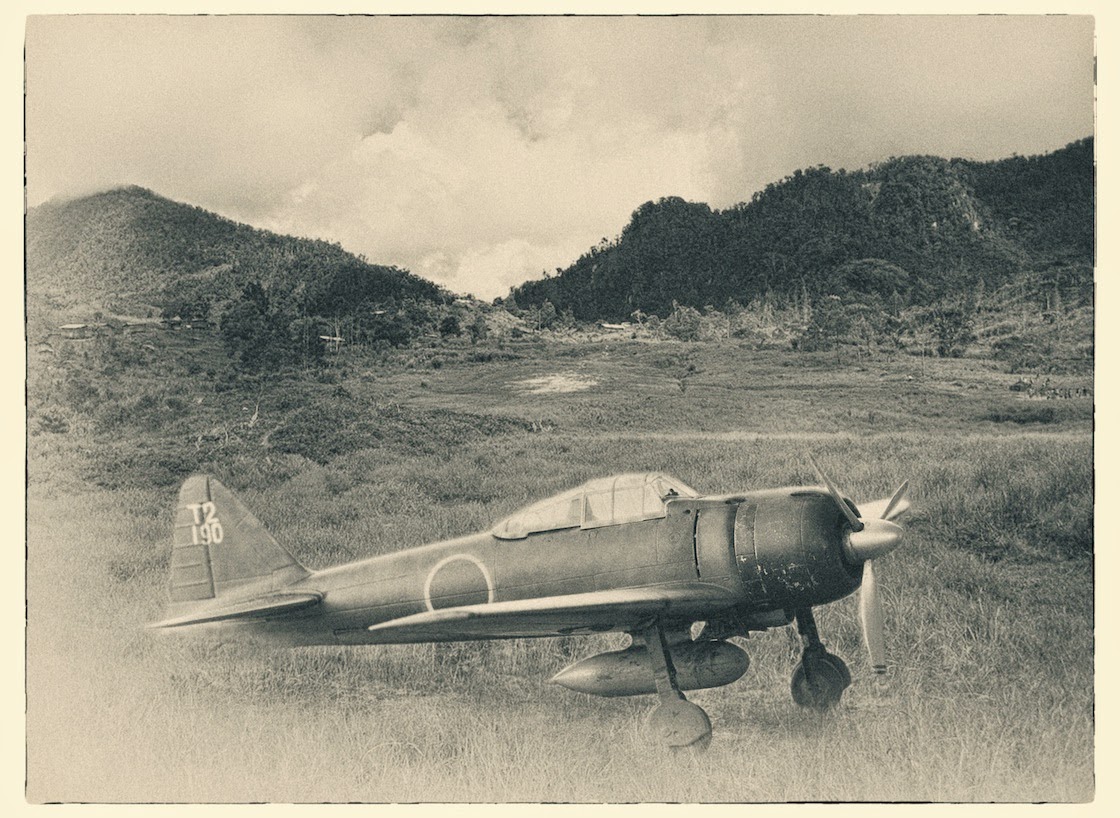 With thanks to Francesco for sharing these images with Aviation of Japan.

Yet another gorgeous Zero from my favorite campaign/era of the PTO! Nick, these are some wonderful posts of late, please keep them coming sir!

I am absolutely speechless! Thanks so much for posting these photos of such a superlative build!