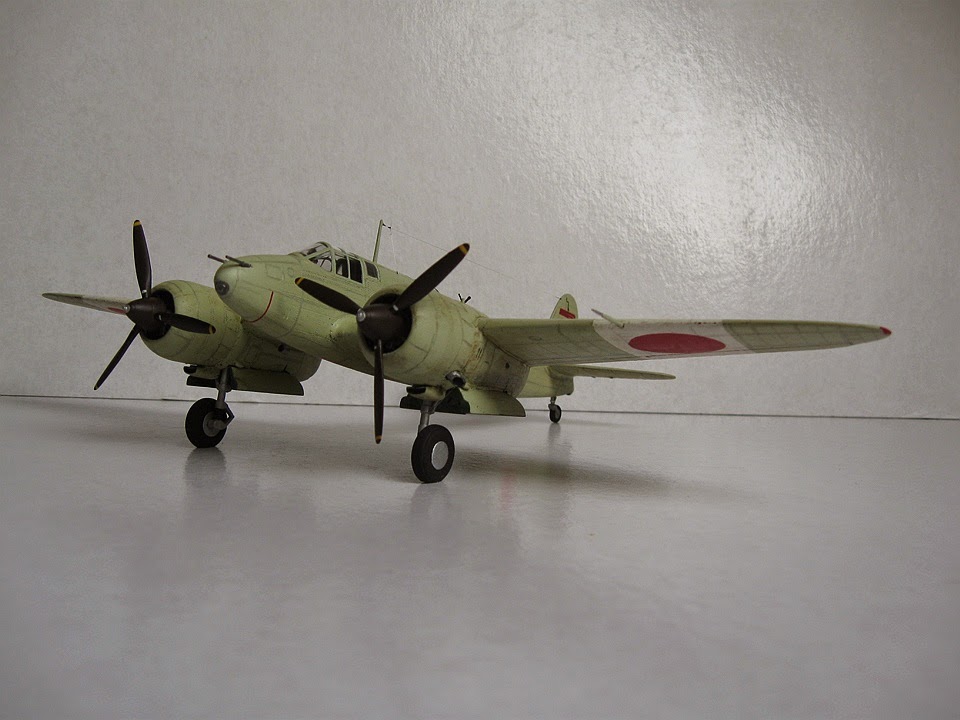 Back in October 2013 Aviation of Japan lamented the passing of that long standing veteran of the Japanese kit industry Nichimo. For many years one of the stalwarts of their range and the only mainstream kit of the type to 1/48th scale was the Kawasaki Ki-45 Kai Toryu (屠竜 - Dragon Slayer) 'Nick' twin engined heavy fighter, the official Army designation for which was Type 2 Two-seat fighter (Ni-Shiki Fuku-za Sento-ki - 二式複座戦闘機) usually abbreviated to Ni-Shiki Fuku-sen (二式複戦). John Haas originally bought three Nichimo Toryu kits, making one up as standard to the box contents, converting another to represent the Ki-102 and then, pondering what to do with the third, decided to back date it to the first operational version as shown here. 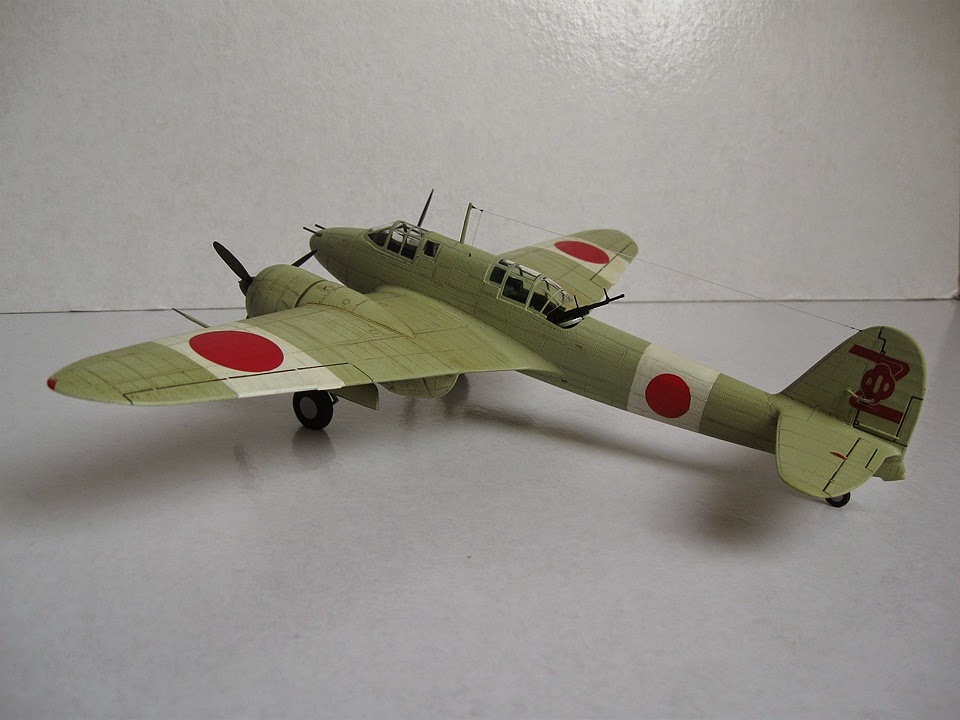 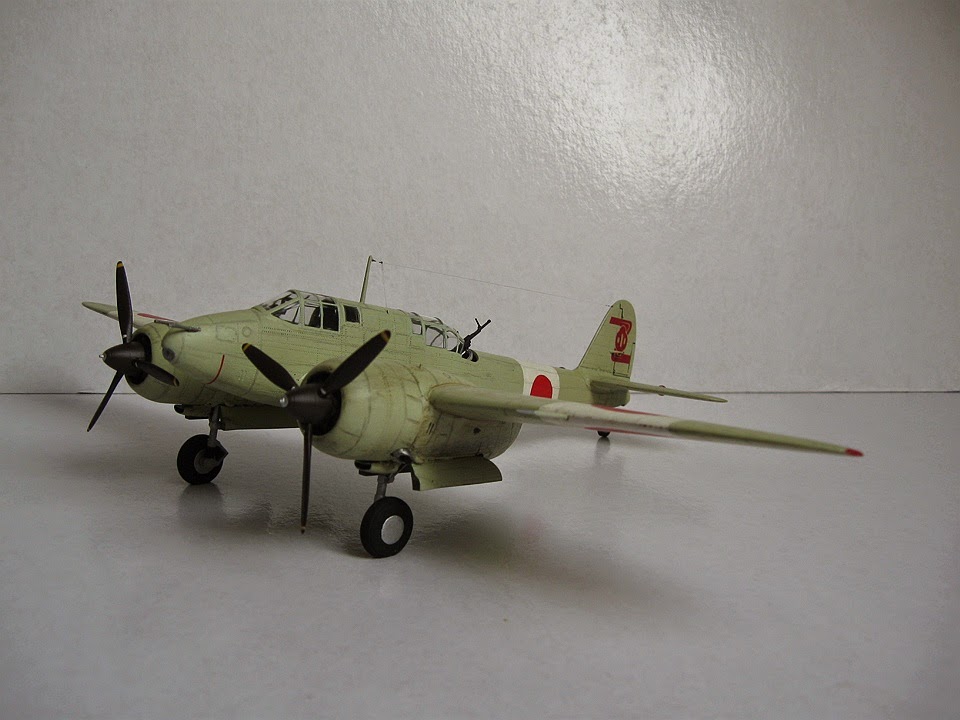 The necessary modifications began with a new contoured and shorter nose, the addition of two nose guns and a central landing light. 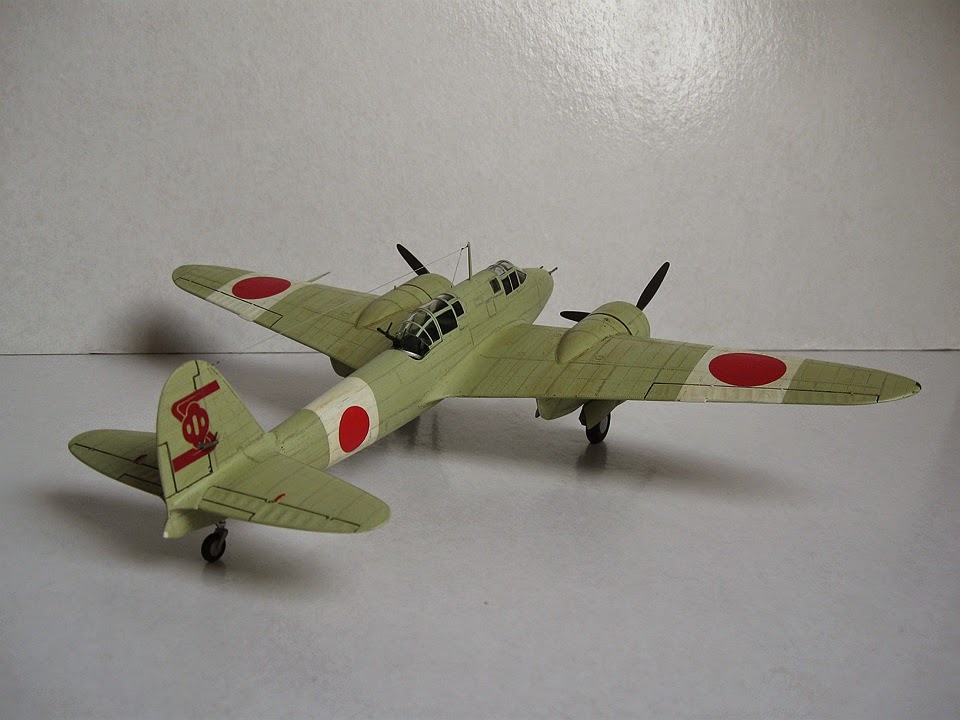 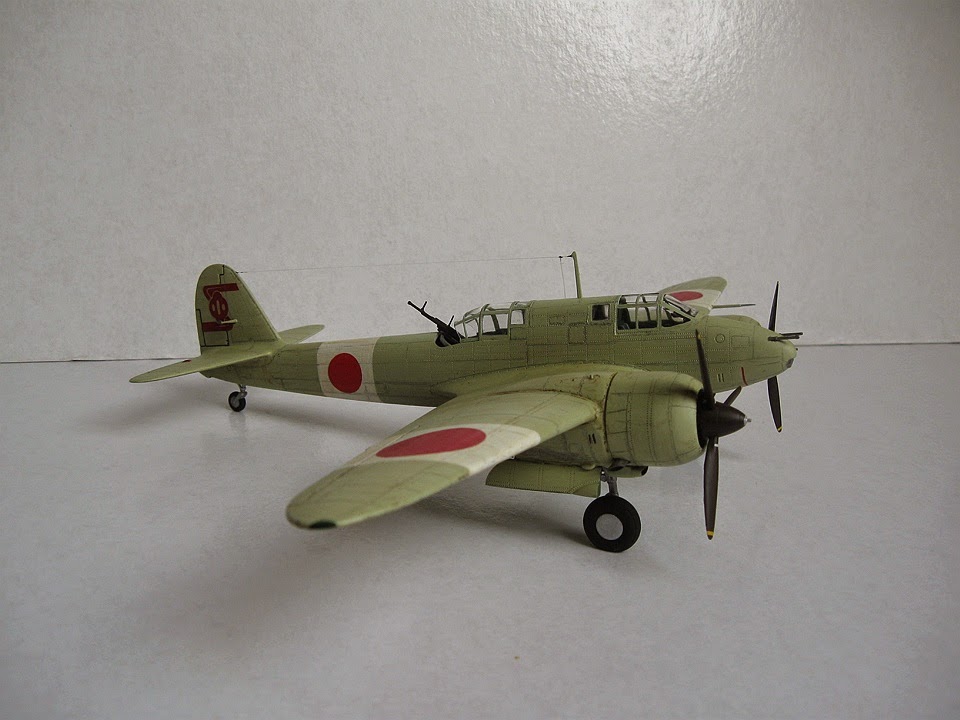 Further modifications were necessary for the engine nacelles. The early version had no intakes in the upper part of the cowlings and the exhausts were different, with only two large stacks instead of the multiple ejector stacks of the later engines. 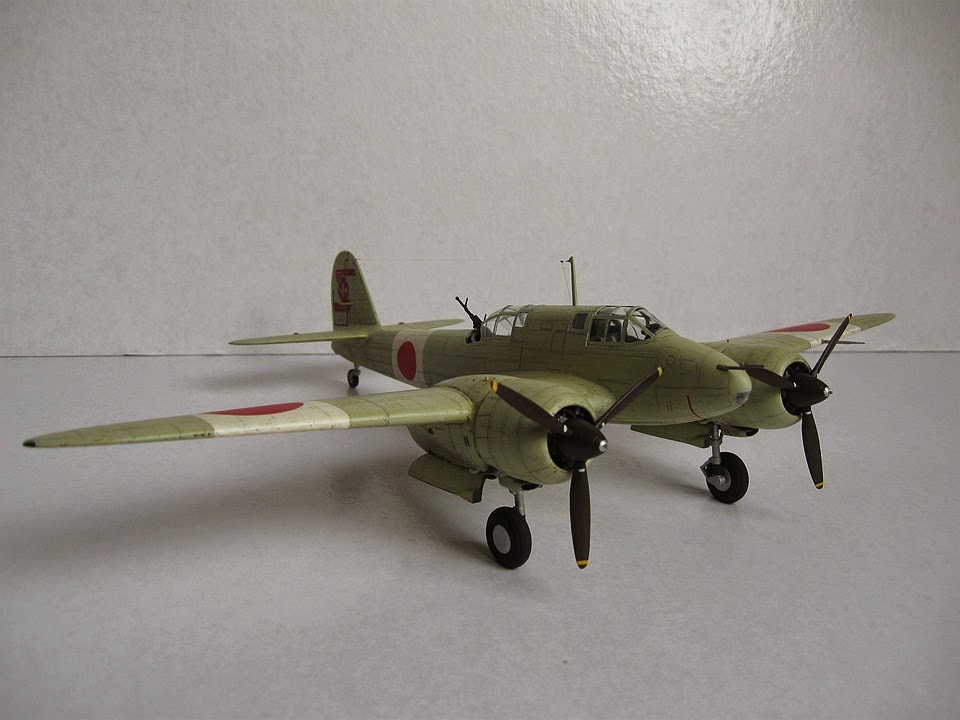 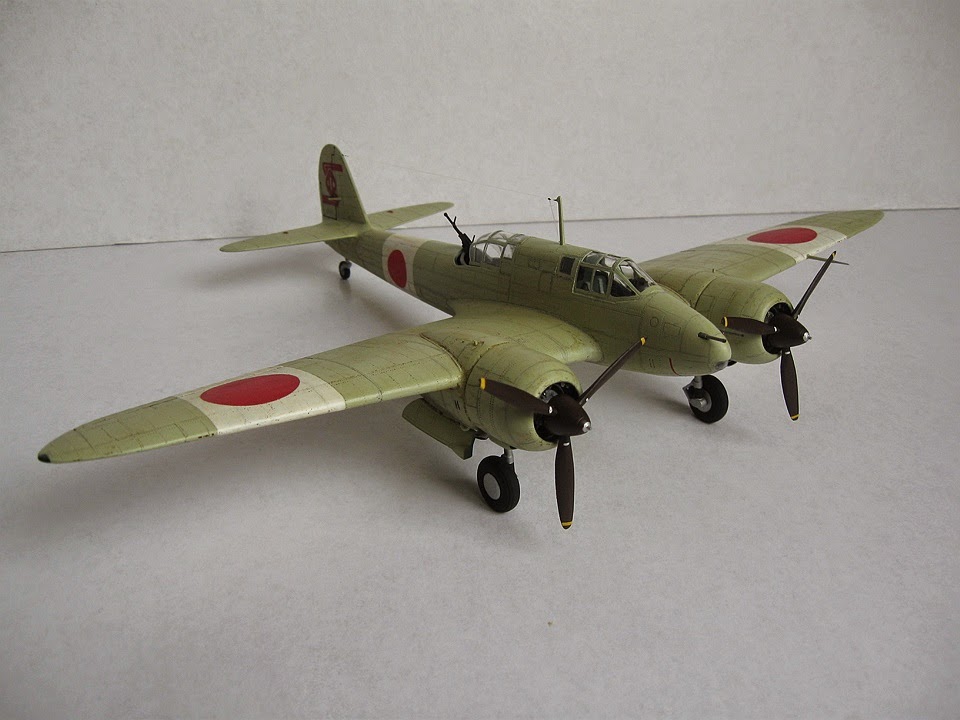 John's painting was experimental and based on photographs he found in the Japanese monograph by Burin-Do # 26 of 1972. The model was first painted with Polly-S Acryl Light Olive A/N 21 (PCJ94) and then an overall wash of brown water colour was applied, with the excess paint being carefully removed with paper tissues. John did not overdo the weathering and completed it by applying some additional accents with coloured pencils. He was rather pleased with the result, considering it not too bad for a first attempt. Though nowadays he has some doubt about the light duck egg green colour. Was it correct? Should it not have been a light grey? Anyhow too late to change it now! The factory finish of the early Toryu was overall IJAAF # 1 Hairyokushoku (灰緑色 - ash green colour), the precise hue of which is subject to much interpretation and discourse. 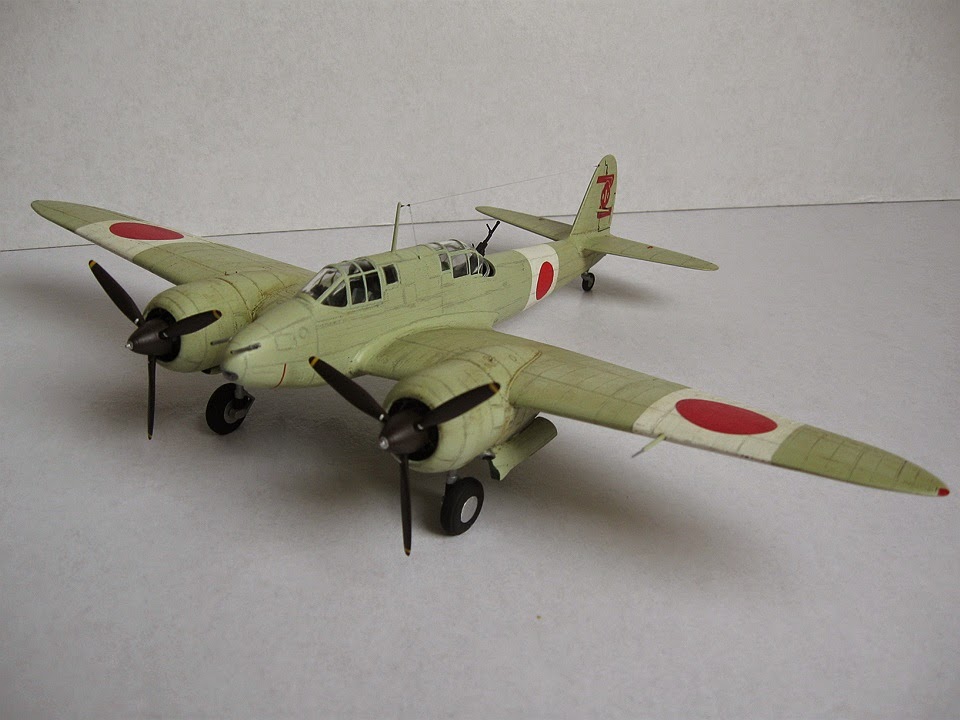 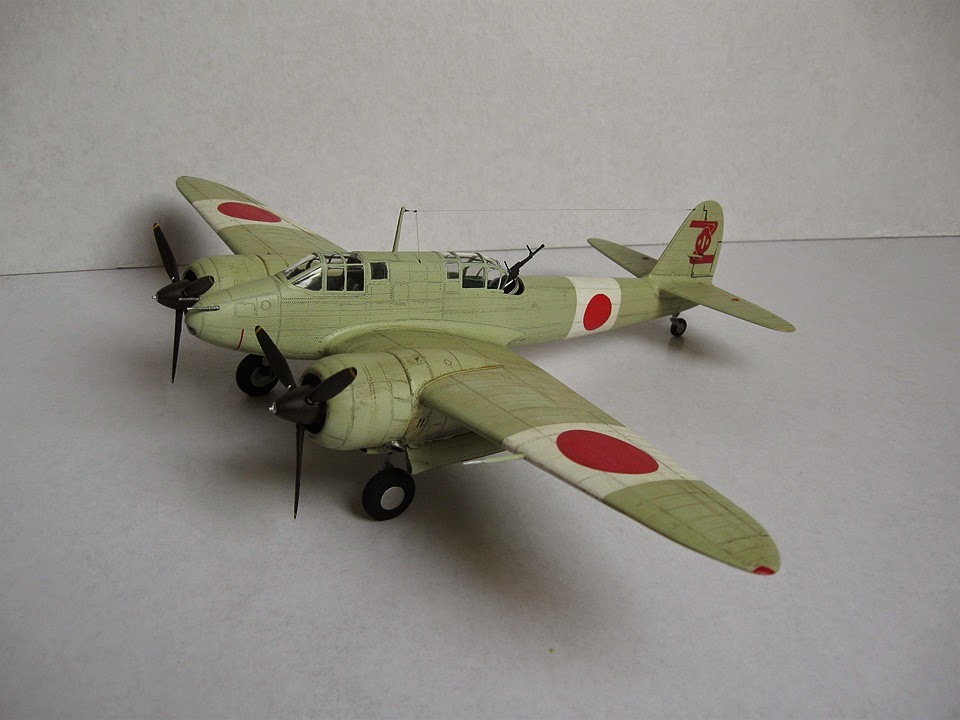 John's model is presented in the Homeland Defence markings of the 2nd Kougekitai (攻撃隊 - assault company) of the 4th Hiko Sentai which began converting to the Ki-45 from the Ki-27 in August 1942 and became fully operational on the type from early 1943. The unit marking represented a Tsuba (鍔 - sword guard) over a winding river and related to Tachiarai (big sword washing place) where they had first formed in 1918 as the 4th Koku Daitai (航空 大隊 - Aviation or Flying Battalion). 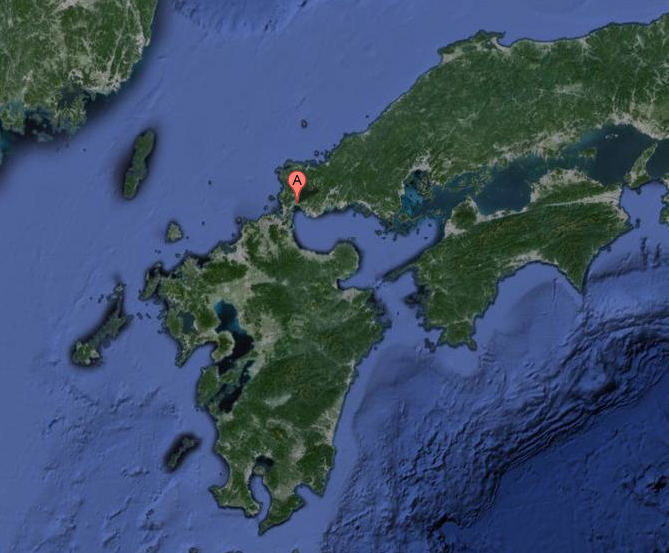 The 4th Hiko Sentai operated the Toryu from Ozuki in western Honshu in the air defence role throughout the war. In June 1944 they became part of the 19th Air Brigade building up under Maj Gen Furuya and responsible for the defence of strategic industrial facilities in northern Kyushu which was part of the Western air defence sector. At that time they had 35 Toryu on strength, of which 25 were operational and eight were designated as "improved model night fighters", probably Ki-45 Kai Ko types equipped with oblique dorsal armament (see below). The 4th had its baptism of fire on the night of 15 June 1944 from which many lessons were learned and improvements implemented - which is another story. The 19th Air Brigade was enlarged to become the 12th Air Division under Lt Gen Michio Sugahara with three fighter Sentai on strength. By July 1945 the 4th was a designated night fighter unit in the Permanently Stationed Air Defence Forces with 20 aircraft on strength. 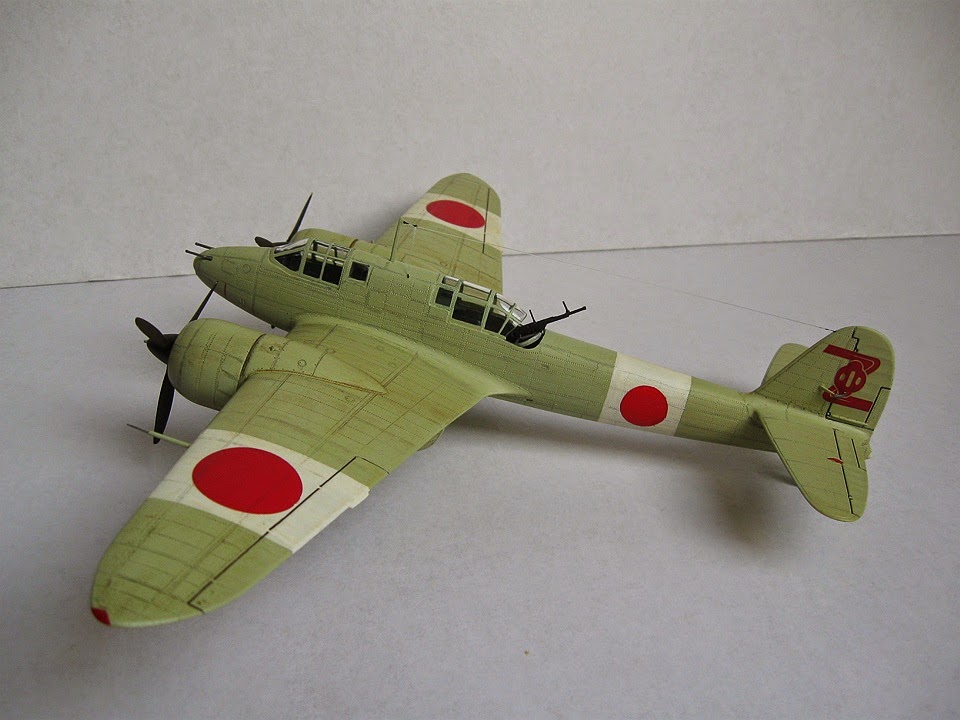 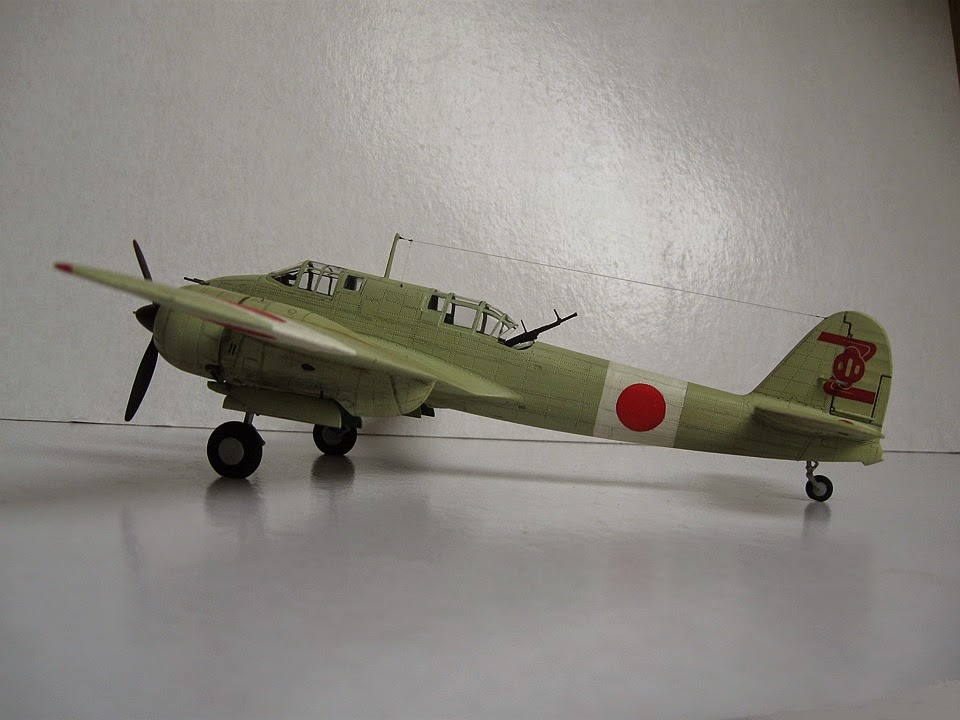 The first operational version of the Ki-45 Kai, retrospectively designated Ko (甲), was armed with a brace of fixed forward-firing Ho-103 12.7mm heavy machine guns in the nose and a fixed forward-firing Ho-3 20mm cannon in a ventral tunnel position on the starboard side. The latter had a 50-round drum magazine (which the observer/rear gunner had to replace by hand) and a very slow rate of fire that both proved to be a weakness in fighter versus fighter combat. Later some Ko types were equipped for the night fighter role with additional oblique dorsal armament of two Ho-103 12.7mm heavy machine guns. The first production prototype for the Ki-45 Kai was uncoded s/n 12, the first of three produced from May to July 1941. Production work up was slow and by December 1941 only an additional 15 aircraft had been completed as s/n 15-29.

The Nichimo kit from 1970 appears to represent a Kai Tei (丁) with oblique dorsal armament, although the instruction sheet is labelled as a Ki-45 Kai Hei (丙) However, the kit is something of a hybrid, as it appears to include the barrel of the 20mm Ho-3 for the ventral position but with the enlarged ventral fairing for the 37mm Type 94 tank cannon fitted to the  Ki-45 Kai Otsu (乙) as an anti-bomber weapon. Nevertheless, for the era it was and still is an excellent kit featuring engraved detail which with a little work makes up into a very good looking representation of Toryu as these images show. 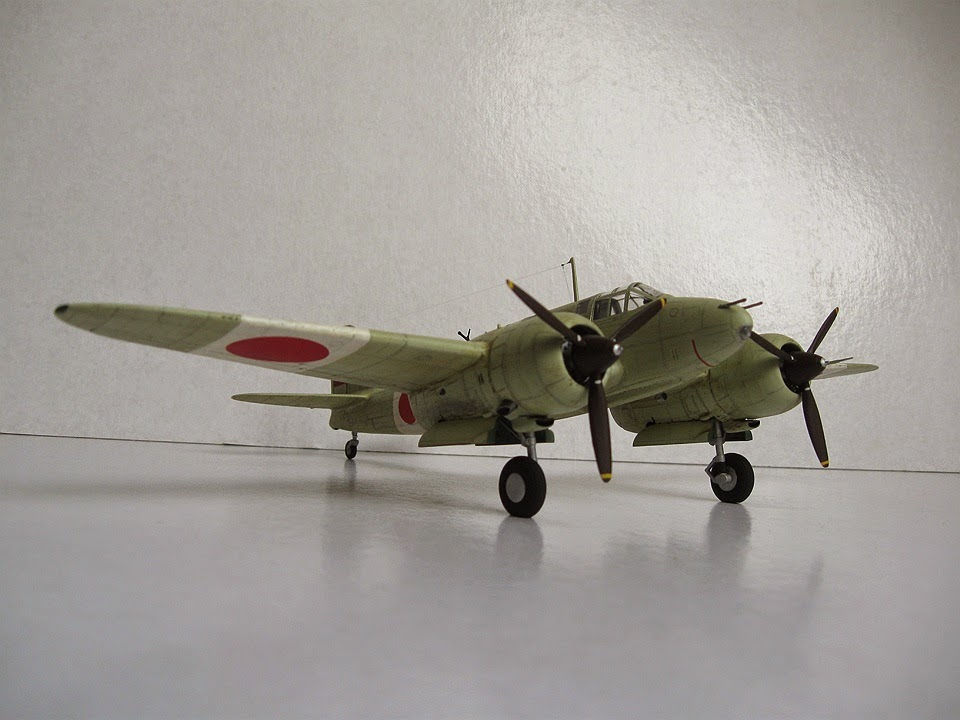 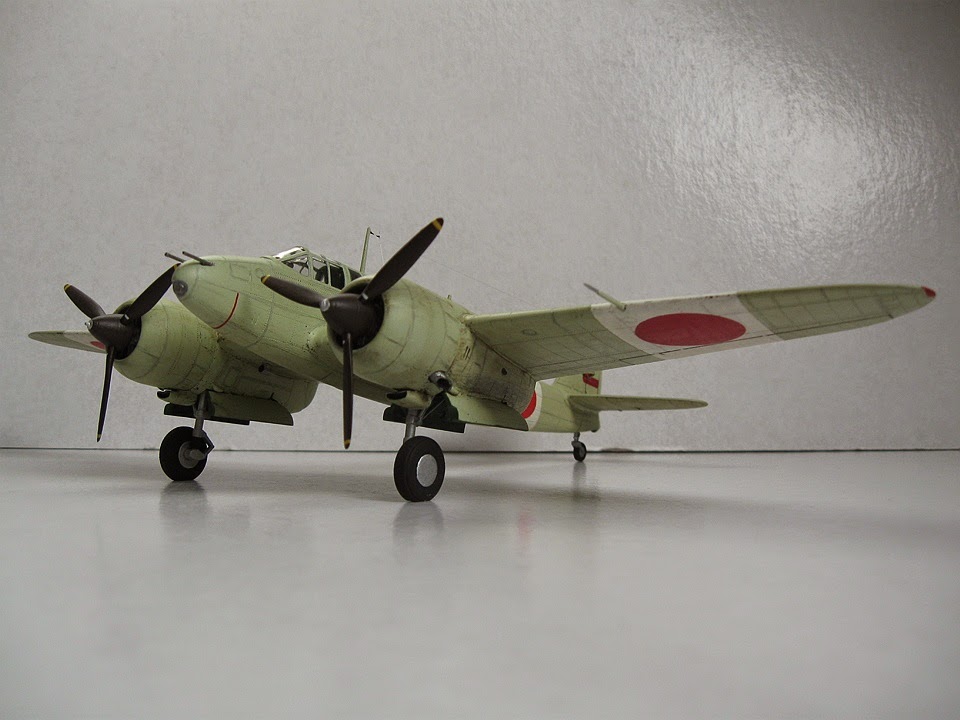 The 4th was an early operator of the Ki-45 but the first unit to be equipped with the new fighter was the 84th Dokuritsu Hiko Chutai (later becoming the 21st Sentai) then at Gia Lam airfield, Hanoi in Indo-China. The 84th was chosen to test the new type on operations because it was a small compact unit, it was not engaged in heavy combat and Hanoi had good communications with Japan. The 84th sent their pilots to Akeno to begin training on the Toryu in January 1942 and they returned to Hanoi at the end of February 1942 with nine Toryu to commence operations. At Akeno they had practiced the new 'rotte' tactics, flying in co-ordinated pairs and making hit and run passes against Ki-27 and Ki-43 single engined fighters in mock combat. The pilots found that whilst they could not outmanoeuvre their opponents in horizontal flight if they commenced combat with an altitude advantage they could  successfully use the hit and run tactics. But some pilots, used to the sparkling agility of the Ki-27, were dismayed at the prospect of flying the Toryu in combat, finding it difficult to start, difficult to fly and suffering from engine and cooling system vulnerabilities. One pilot even refused to fly the type. 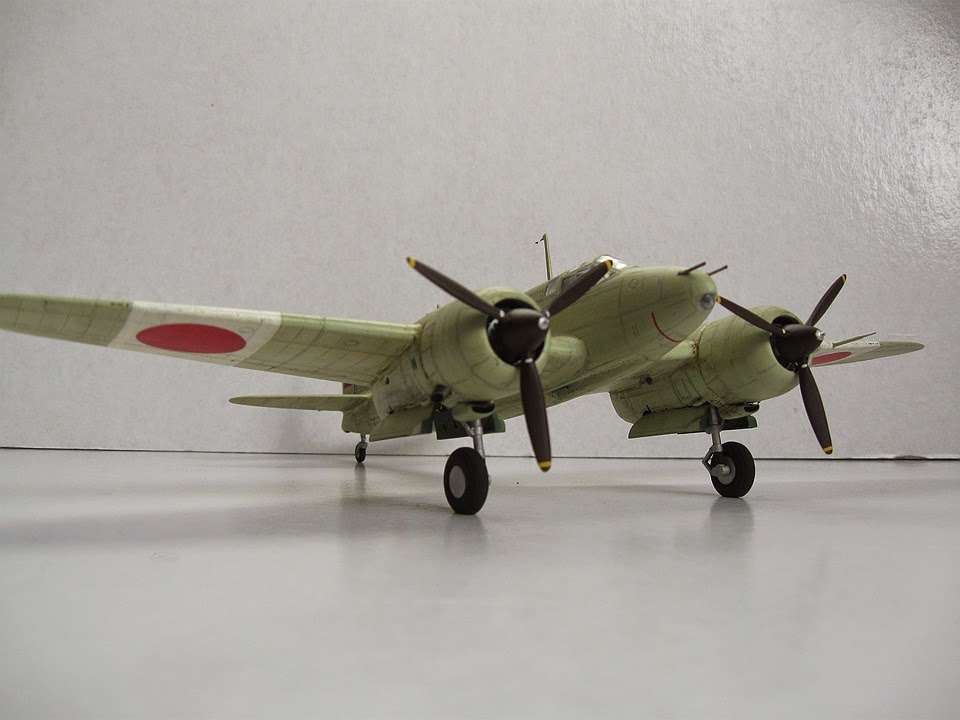 After their first combat experience on 12 June 1942 during a combined attack against Kweilin in which they appeared to have a slightly confused mission objective and had faced the P-40s of the AVG (Flying Tigers), the 84th submitted an evaluation report on the type. They concluded that its performance had been disappointing, listing a number of complaints and recommendations for improvements. Despite this early attempt to introduce the 'rotte' tactics the 84th's disappointment in the type heralded an ongoing doctrinal dichotomy within the IJAAF that would plague it throughout the war, affecting both design development and operations. The AVG pilots were surprised by the encounter, presuming the unfamiliar aircraft to be bombers and shocked to discover their forward firing armament.

The first Homeland Defence unit to operate the Toryu was the 5th Hiko Sentai at Kashiwa near Tokyo, which received six aircraft at the end of March 1942 and actually sortied them in response to the Doolittle Raid in April. But the 5th's Toryu climbed to high altitude in preparation for using their hit and run tactics and missed the scattered low level B-25 intruders. They were then fired at by their own anti-aircraft artillery and had to be escorted back to landing by Ki-27s to avoid the risk of further friendly fire. In June 1943 the 5th deployed overseas to the New Guinea theatre with their Toryu, returning to Japan in September 1944 and continuing to operate the Toryu from Kiyosu near Nagoya in the air defence role until the end of the war, although in May 1945 they also began operating the Ki-100 single seat fighter. The 5th was also a  designated night fighter unit in the Permanently Stationed Air Defence Forces with a small number of Toryu fitted with experimental air interception radar. 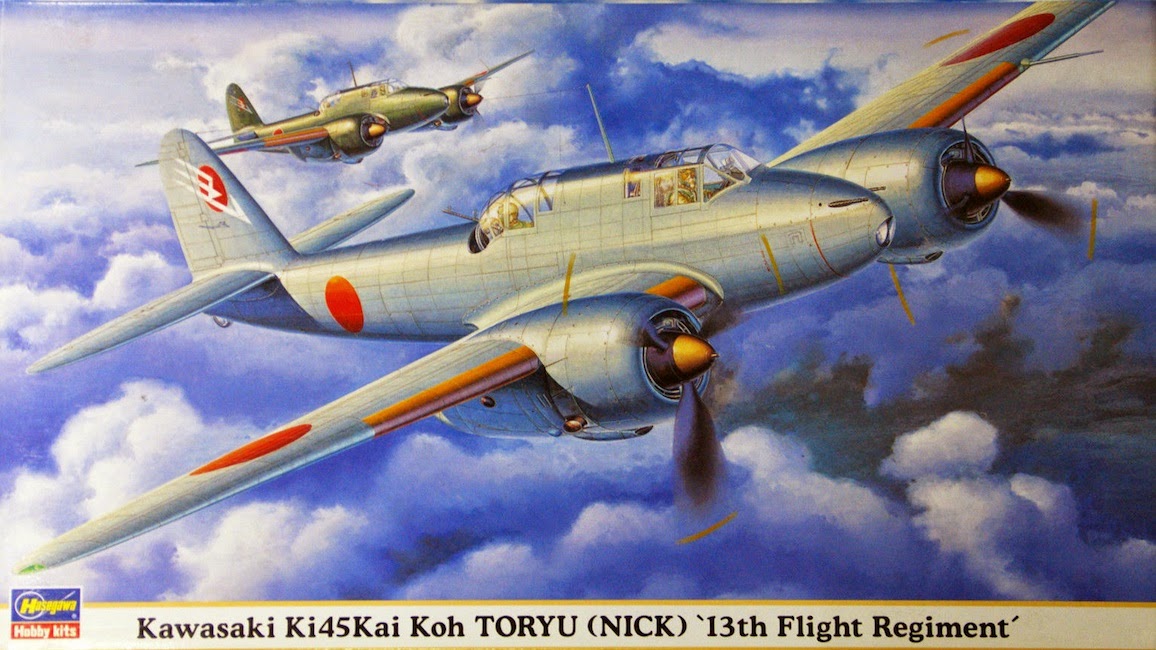 The Nichimo Toryu, for nearly 40 years a popular candidate for improving and super detailing for the display tables, was finally eclipsed by the introduction of the Hasegawa family of all new-tooled 1/48th scale Ki-45 Kai kits (above) at the end of 2007 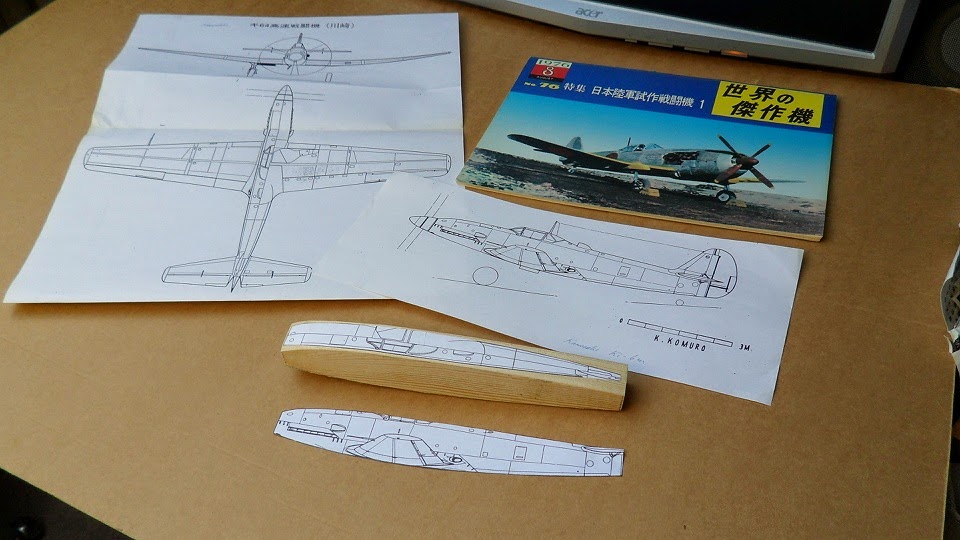 With special thanks to John Haas for kindly sharing these images of his Toryu model with Aviation of Japan. John is currently beginning  a new project to scratch build a 1/48th scale Kawasaki Ki-64 'Rob'. He has always found it a fascinating aircraft with its two engines in tandem but as it seems there is no kit in 1/48th scale, he is resorting to the time honoured scratch building in wood. John has provided a preview above. I hope that he keeps Aviation of Japan posted with his step by step progress!

A beautiful build of a beautiful aircraft, well done (as were the 2 A6M's posted earlier this week). Thanks for sharing these....

Nice work on the Ki-45 Nick, John! I especially like the weathering applied in line with the slipstream, it's very effective. It would be great to see the other two Nichimo kits you built.

I'm also intrigued by the project to scratch build the Ki-64 from wood. What are the chances of having you send along progress photos with some descriptions of the process? I would love to expand my modelling skills, and I think you'd be a master teacher. Cheers, Bill

Great job, I love it!
The Nichimo "Nick" is most definitely the most enjoyable kit I've ever built (closely followed by Tamiya's "Frank" in the same scale). At the time it was quite special as 1/48th scale Japanese twins were an absolute rarity. It looks great and the backdated nose makes it extra-special.