That Other Shoki ~ Part One 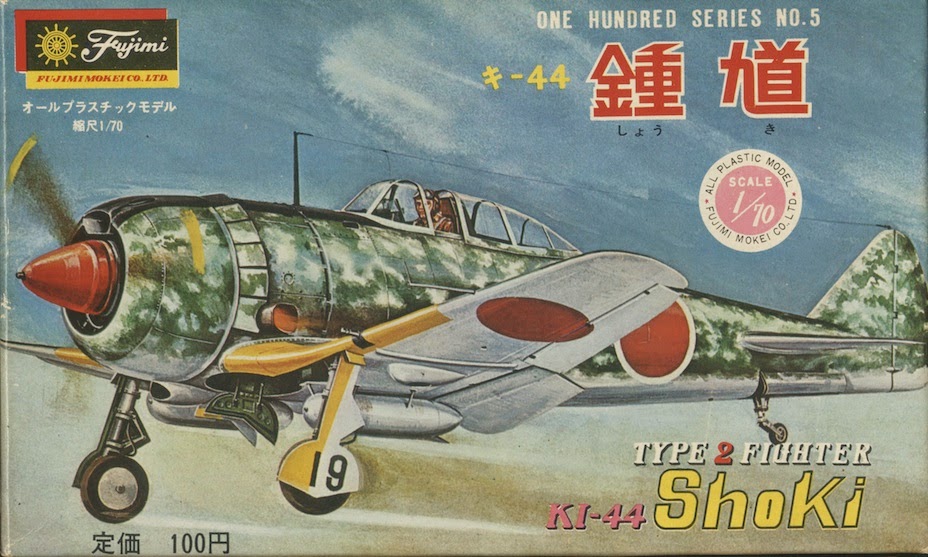 "The Shoki had a palpably high-speed, modern and beautiful style and has become intimate with Japanese People as well as her sister fighter 'Hayabusa'. The Hayabusa with moderate style was a light fighter attached in importance to the capacities of aerial combat and on the contrary the Shoki with intrepid style was a typical heavy fighter aimed  at speed and climbing power. At that  time many people had an idea that light fighter was the best and therefore the Shoki had not enjoyed much popularity among pilots. However, it was true that the Shoki was a world-famous fighter." 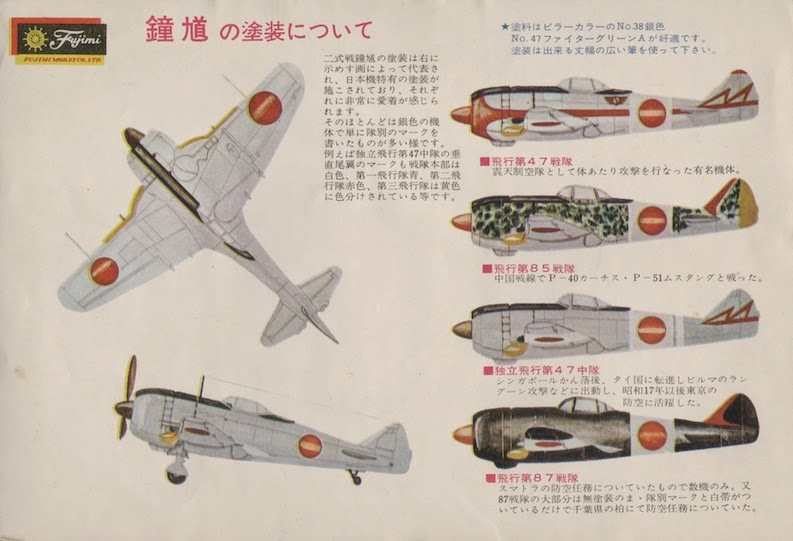 The first generation Japanese aircraft kits from Fujimi have been mentioned before but one that saw considerable mileage was the Nakajima Ki-44 Shoki first issued circa 1965 as No.5 in their 'Metallic Series' and 'One Hundred Series' from which the heading box art and description comes. 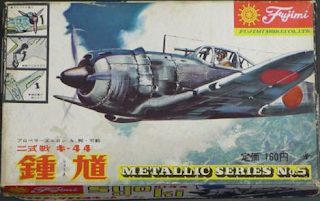 The kit was first marketed as being to 1/70th scale and the 'One Hundred Series' issue came with a neat little colour markings insert but the decal sheet only offered Hinomaru and yellow wing leading edge IFF strips. Note especially the yellow rudder on the 85th Sentai example which accords well with some photographs of early Shoki in China. The kit was moulded in silver plastic with raised panel lines and rivets together with outline decal locations. There is no interior detail but just a built in bench seat for the pilot figure. Working parts include the usual spinning prop, undercarriage with revolving wheels which is designed to retract into open wells and moveable ailerons. The kit includes underwing drop tanks but no engine detail, the inside of the cowling being moulded solid. The canopy is a one-piece moulding. 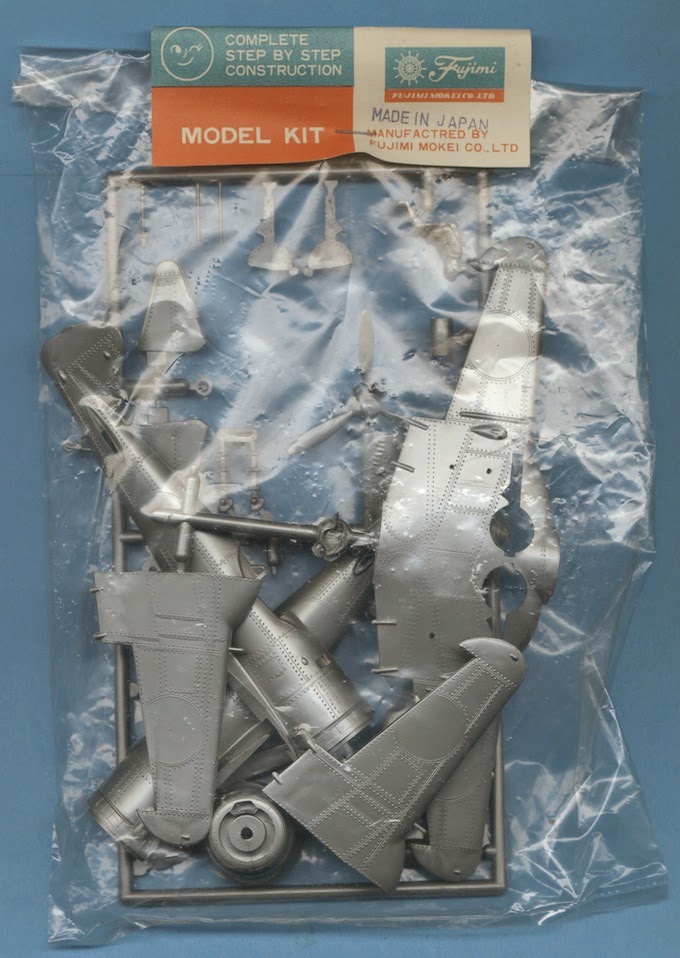 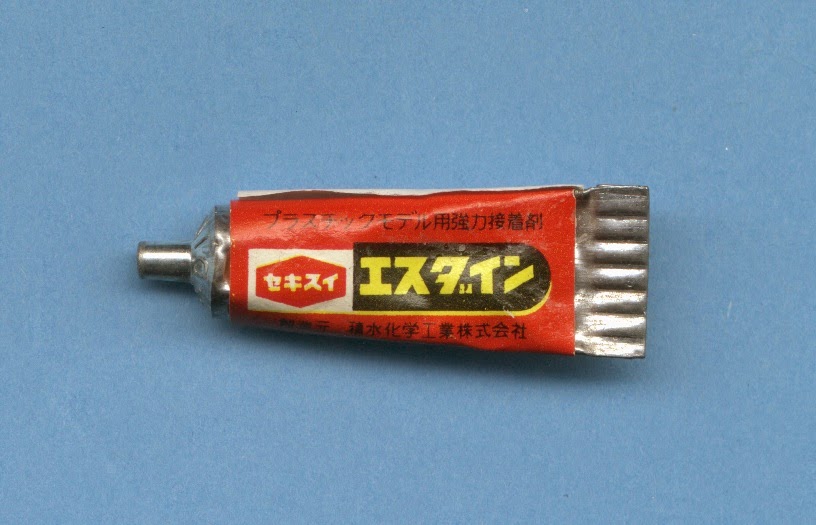 In every kit a miniature tube of glue - those were the days! 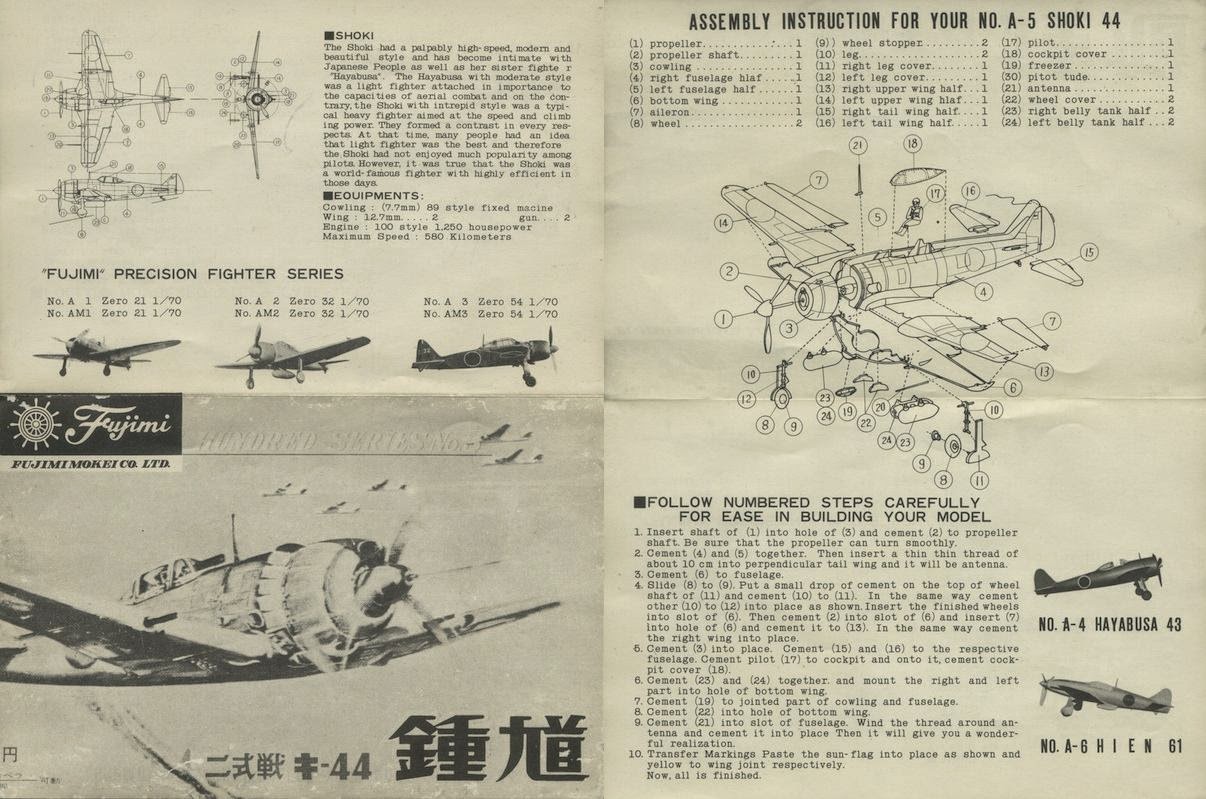 "Wind the thread around antenna and cement into place. Then it will give you a wonderful realization"

The instruction sheet, in English and typical of its time, included a description, a  tiny but rather neat plan, a single exploded view showing the parts with their numbers, a list of the numbered and named parts and 1 to 10 narrative directions - the 'complete step by step construction' that we used to ponder so seriously at that kitchen table. This edition box was also re-issued by Air Flash in Canada with over-printing (below) and re-printed instruction sheet. 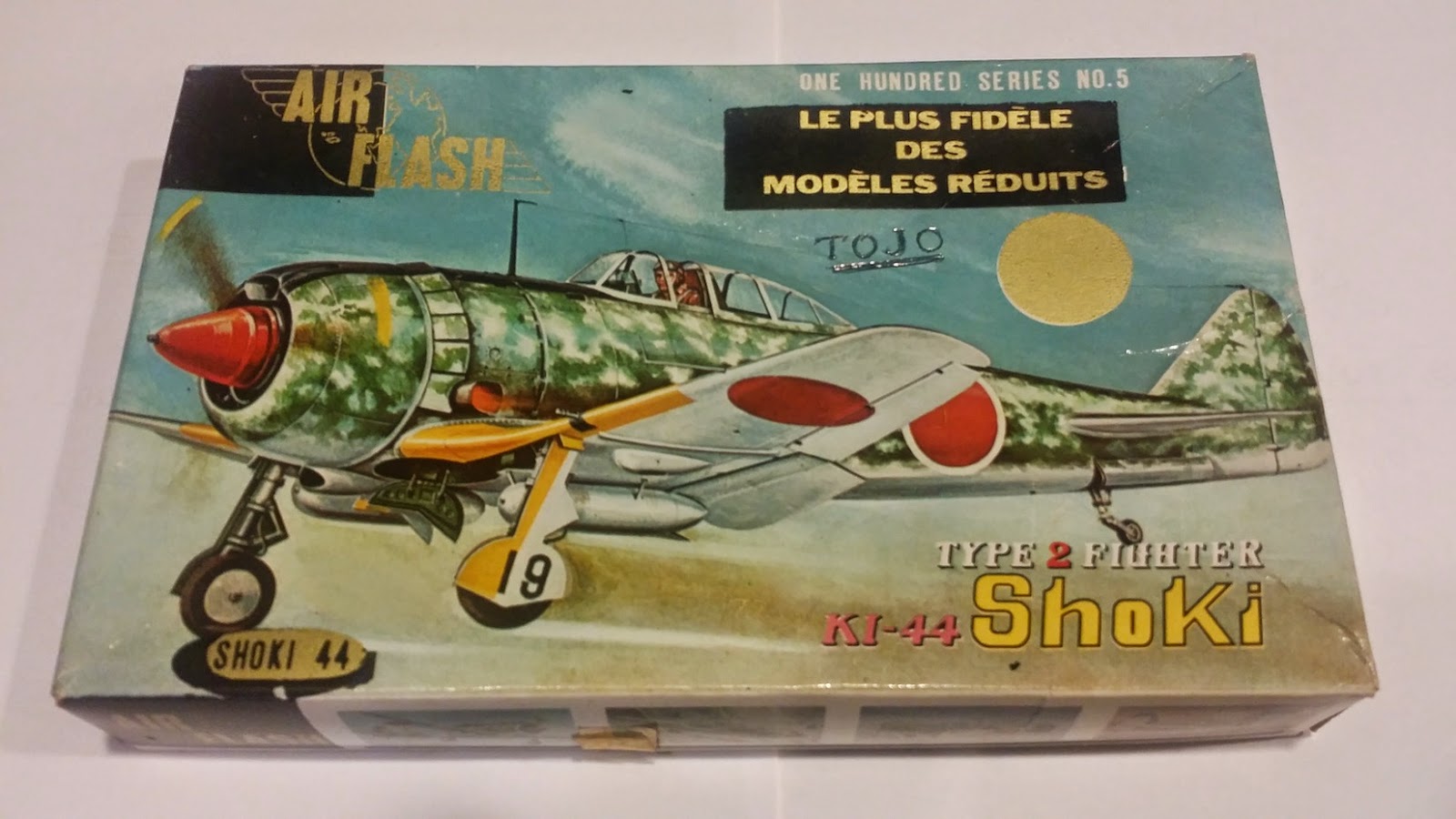 At some stage the kit was issued or re-issued as No.5 by Shizuoka Hobby (above) which used a similar but not identical ship's wheel logo as Fujimi. The relationship, if any, between Fujimi and Shizuoka Hobby is obscure. The kit was identical except that it was moulded in a grey-green plastic with a different set of instructions. Despite the colourful new box art of a 47th Sentai Shinten Seikutai aircraft in full Homeland Defence livery the same basic decal sheet without unit markings was included. The box was marked prominently as being to 1/72nd scale. 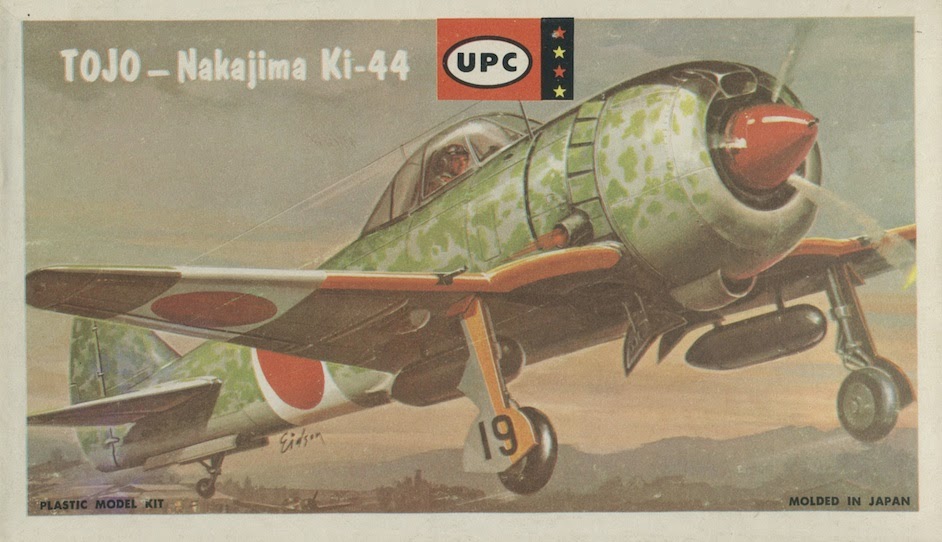 Fujimi's Shoki was marketed in at least four export versions. UPC (Universal Powermaster Corporation) of New York issued the kit in the USA as # 8013-50 in a new box with characteristic 'dawn patrol' Scott Eidson art from 1966 (above) which reversed the direction of flight to the original illustration. The box was marked on the side as 'Flight Series 1/72 Scale' but the instruction sheet was labelled 'HO Pocket Series'. Again the decal sheet contained only Hinomaru and the yellow IFF strips with no unit markings. Note that Eidson used the same '19' wheel cover number as the original box art, also omitted any unit markings but added Homeland Defence 'bandages'. 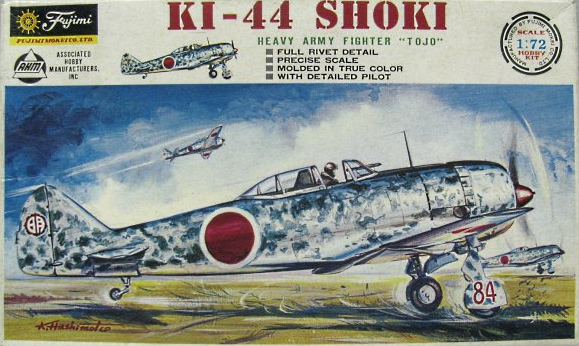 A new box with K Hashimoto art depicting a mottled Akeno Flying School Shoki on its take-off run was again marked as 1/72nd scale. This box, originating from Fujimi, was issued in the USA by AHM (Associated Hobby Manufacturers Inc.) of Philadelphia during the late 1960s as # FC-5. The AHM logo appears beneath the Fujimi logo on the top left of the box (above). The AHM association with Fujimi apparently ended in 1971. From 1972 to 1973 Bachmann Bros., Inc. of Philadelphia re-issued the kit in the USA as # 0705. The box art was identical but the Bachmann logo appeared in an orange rectangle above the Fujimi logo (below). Sometimes these kits are referred to as Fujimi-Bachmann. 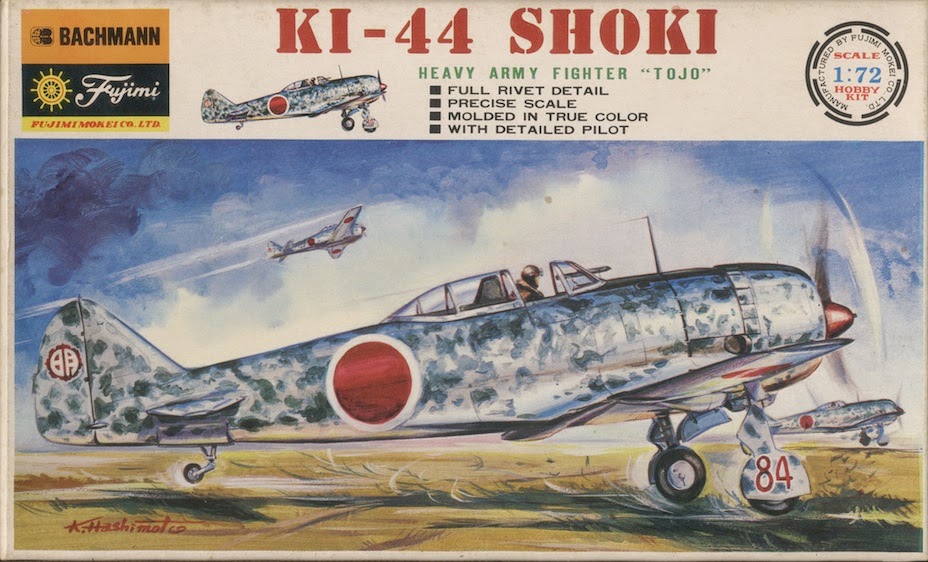 According to Burns* the Fujimi association with Bachmann Bros. lasted until 1975 but Fujimi also appear to have issued the kit directly from Japan as # 7A-5 from 1972-1975 in the same box with only the Fujimi logo as shown below. 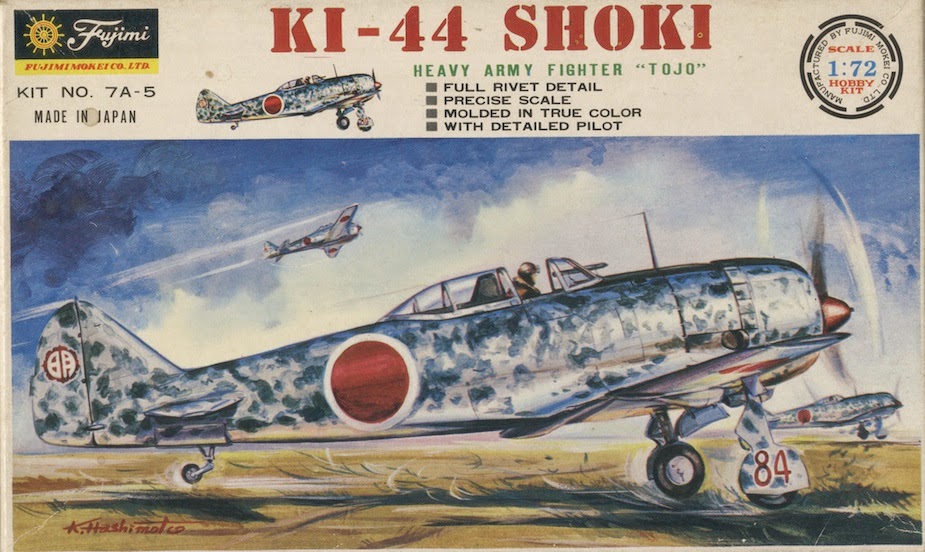 So what does Fujimi's Shoki look like built up? Well, Ken Glass very kindly sent me some photographs of his near contemporary builds of this kit from his own collection. Although considered crude by today's standards I think this old Fujimi warrior captures the character of the aircraft in a rather charming way and the blue-grey mottle on Ken's 85th Sentai example is especially splendid looking. In the absence of suitable decals the unit markings were hand-painted, inspiration coming from Donald W Thorpe's seminal 'Japanese Army Air Force Camouflage and Markings World War II', the classic Aircam Aviation series of books as well as various other publications. 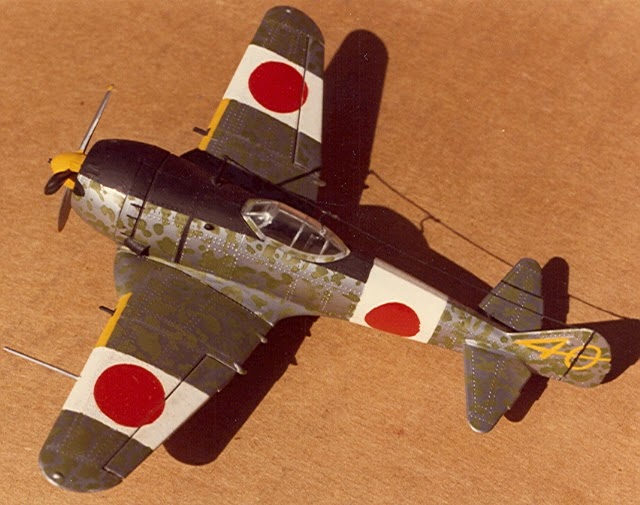 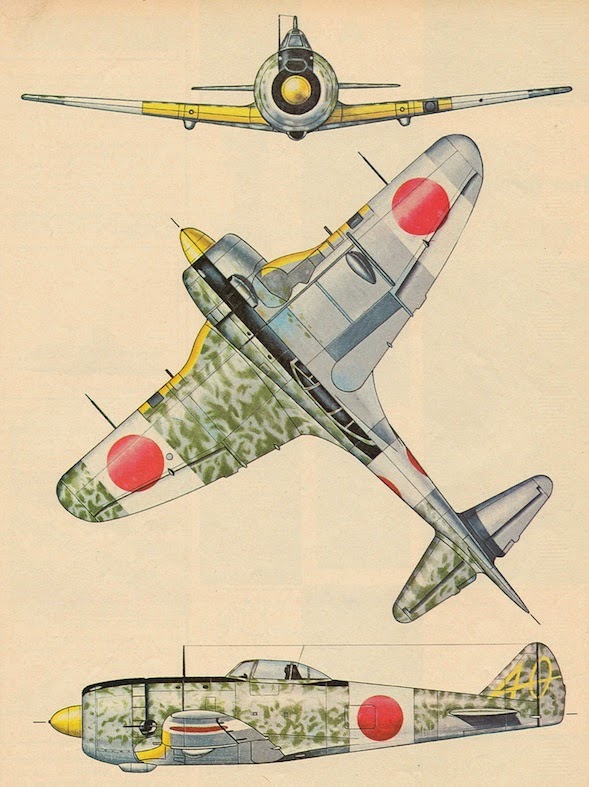 Ken has also provided some reminiscences about building the kits:-

"The 104th Sentai build was completed in the late 1960s (from a UPC boxing as best I can remember), hand painted with Pactra’s ‘flat Leaf Green’ using my then standard tool of a 1/4” flat - camel hair brush.  How many remember those?  A Challenge Publications ‘Scale Modeler’ monthly magazine issue with colour profiles by Sidney Chivers was the reference.  That antenna ‘wire’ was a short piece of heavy cotton thread snitched from a spool my mother used to reattach popped buttons on clothing.  In scale it was no doubt the heft of a hawser, sufficient to secure smaller naval vessels, at a minimum.  I have not seen a photo to substantiate that Chivers color profile, but ‘never say never’. 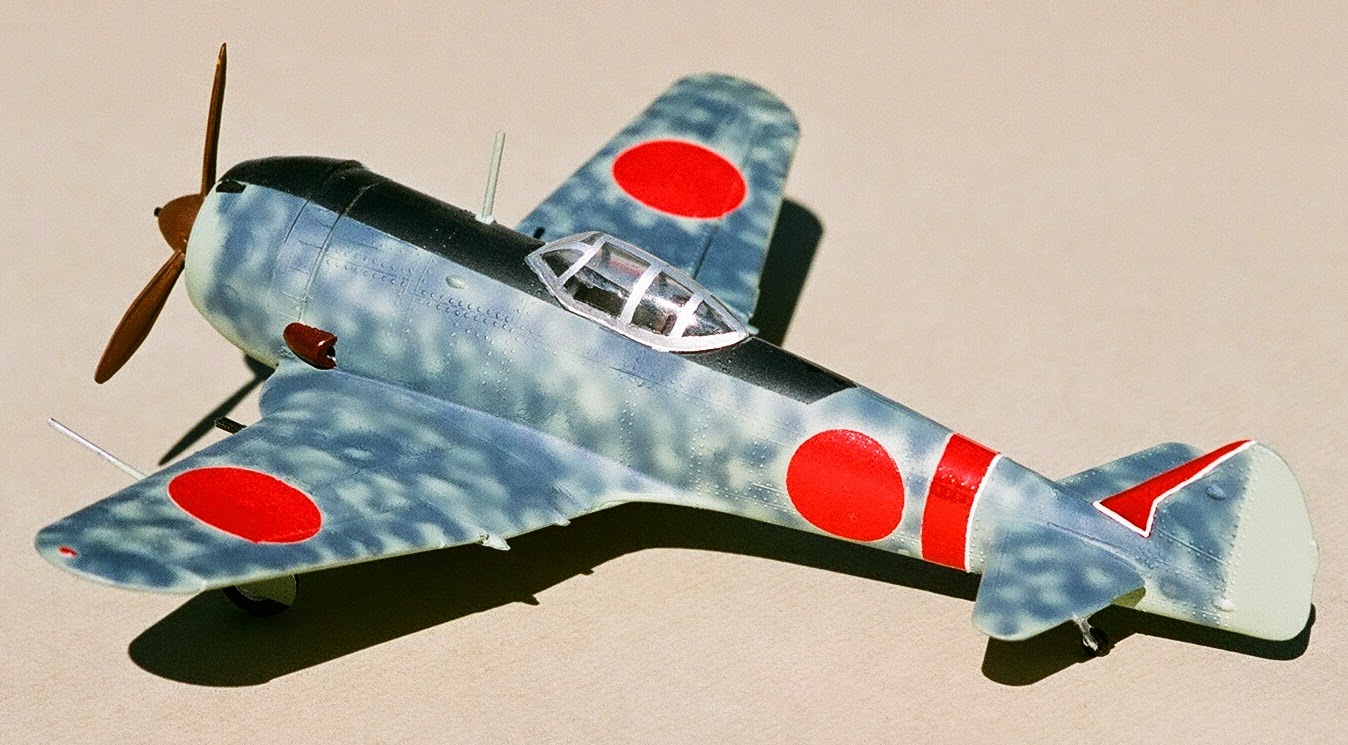 "Most of the Fujimi kits were done at the same time in 1972.  All together about 22 or so 72nd builds were on my assembly line and finished together.  I was motivated then due to limited access to the first airbrush usage I experienced.  It was a relatively large Wren type fitted to a 90 psi capable, commercial grade, air compressor system.  I have not done a fully hand brushed paint job since. I remained totally ignorant of the existence of dedicated Japanese aviation magazines until about March 1973 when I first happened upon them in a hobby shop in Atlanta, GA.  But I did have my copy of that Aircam mentioned. 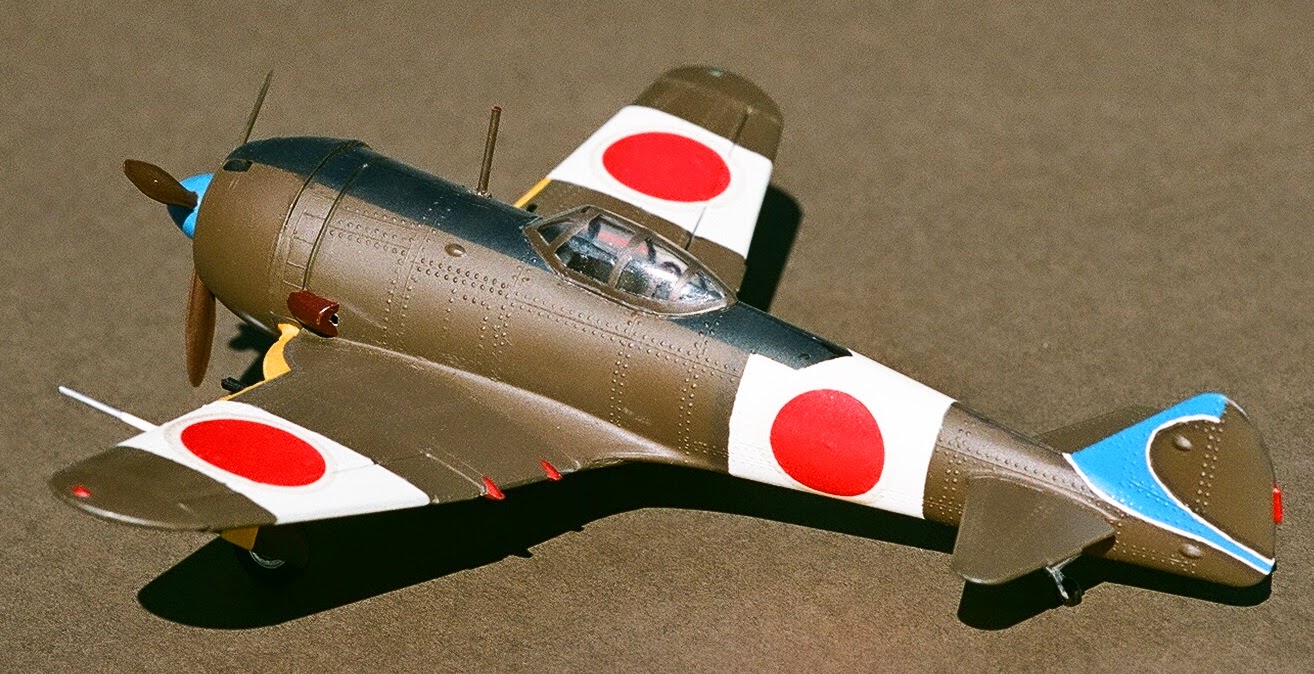 "Thorpe’s then still relatively recent IJA book was my reference for the 85th Sentai build finished in approximately 1972.  Had I had access to a contemporary colour profile in the Koku-Fan magazine by K. Hashimoto, the style and presentation of the blue-gray mottle would have been visually different, perhaps hand applied instead of airbrushed.  Thorpe again for the 29th and 87th Sentai builds.  The exact presentation of the 29th Sentai marking on a Tojo was then unknown to most enthusiasts, corroborating photos not coming forward until the early/mid 2000s at J-aircraft.com. The 47th IFc build was sourced from a plate in the 1969 Kenneth Munson book 'Fighters 1939-45' (Macmillan).  We now know my use of that solid topside brown coat should more accurately have been a very heavy mottle application instead." 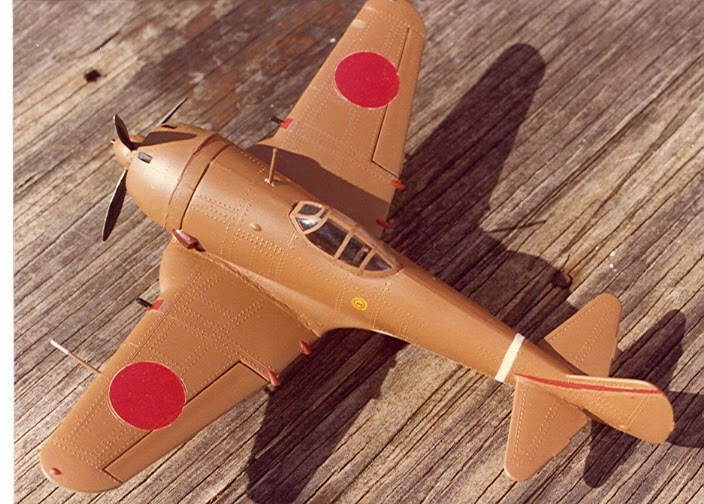 And here's a confession. I still enjoy building and brush painting these old, angst-free kits where nostalgia-fuelled imagination has to work harder than the mould engineering. Part Two of this reverie will consider the Tamiya Shoki kit to complete a trio of blogs that started with the Hasegawa Ki-44. A supplementary blog will look at the various Hasegawa re-issues and special editions. By all means share any memories, kit or model images if you care to, thanks.

With special thanks to Ken Glass for sharing these wonderfully nostalgic and colourful images from his collection and his memories of building them.

What a great bunch of models! Those profiles Thorpe profiles look pretty tatty compared to later standards, but were certainly inspirational, and you pulled them off beautifully with the hand-painted insignia. You seemed to pick some of the hardest ones. Thanks for pulling these out, Ken...

Indeed, you did a great job. Lord, I remember kits like those.