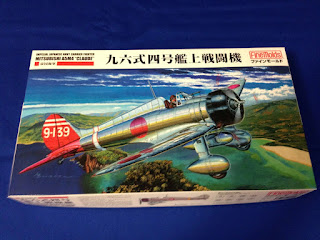 Dan Salamone has very kindly provided this preliminary  in-box review for the new Fine Molds IJN Type 96 Carrier-based Fighter IV/ Mitsubishi A5M4 'Claude' kit in 1/48th scale, one of two variants released (the other being the enclosed cockpit 2-2) as presented here in April.

"The brand new 1/48 A5M4 Claude from Fine Molds arrived today from HLJ and initial impressions are very positive. Although the parts count is relatively low (69) the quality of the moldings is superb and the engineering seems to be well thought out. From examining the parts, as well as images of a built version of this kit, the outline and details seem to be accurate compared to the actual aircraft. I tried to catch some of the details explained below in the images of the parts. 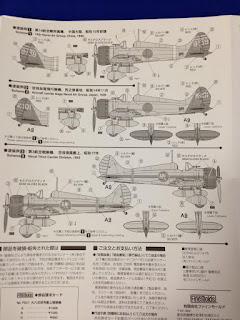 The cockpit floor is molded into the upper wing half, with the sidewalls, rear bulkhead and instrument panel attaching to the upper wing half. The assembled fuselage halves seat down over this assembly, and the separate upper fuselage decking forward of the windscreen follows actual panel lines. 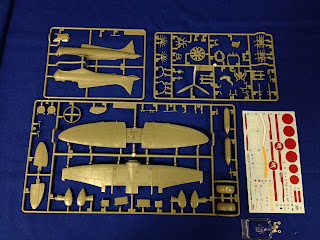 The fabric effect on the cloth flying surfaces consists of raised ribs, but no "sagging" effect. I like this look, but may sand down slightly when I build the kit. 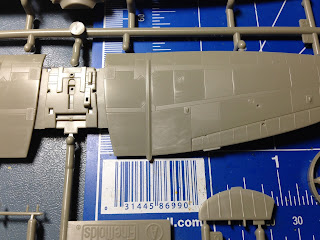 Two very minor "negatives": the flap parts (you have the option of raised or lowered flaps) have very nice detail but there are ejector pin marks that will be very difficult to remove. Also, the very highly detailed engine and exhaust assembly needs to be trapped between the cowl halves. These halves do not fall on actual panel lines, so extra care will be needed during assemby and painting. 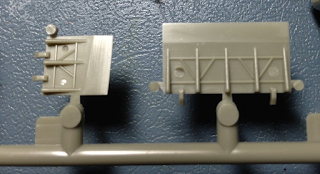 Three different aircraft are included in the markings options, all overall silver. The subject of the box art '9-139' is from the 14th Kokutai in China during 1940. The second option is 'K-101' from the carrier Kaga in Japan during 1939 and the third option is for a rather colorful aircraft 'CI-106' flying off the carrier Hosho during 1942. I am hoping that aftermarket decal vendors will serve this kit well, as there are some other very colorful possibilities.
Overall, I can't wait to build this kit. The two previous kits of the later Claude in 1/48 were the far less impressive Classic Airframes kit, as well as the very hard to find, yet gorgeous TC Berg multi-media kit. This Claude is superb in the box, and is yet another gem among Fine Mold's most recent 1/48 aircraft kits, the Ki-10 and Ohka. Highly recommended."

With special thanks to Dan for his in-box review. I note with pleasure that the kit includes a pilot figure! The two released kits are already on back order at HLJ!

It looks really promising. I put it on my wishlist.

Thanks for doing this leg work, Dan. Any indications that Fine Molds plans to issue other variants using some common sprues?

Upon looking at all the images of A5M4's parked on the ground in my references, none show the flaps dropped. A few images show them dropped during landing. I'm planning on building it flaps up, so the ejector pins are irrelevant.

Also, the kit is indeed on back order at HLJ, but Hobby Search still has the kit (both versions) in stock:

I got mine (M4) yesterday from HLJ (it was preordered).

What a beauty. It's even better than the Ka-14.

Now how best to achieve that tint...

Thanks Ken, I think from this set of molds the only other variant you could get would be the 2 seat trainer. Personally, I'd have preferred that over the A5M2b with the enclosed canopy as very few of those saw service.

Fine Mold's first foray into 1/48 around 1990 were the early Claude A5M1/2 variants. I have one, have never built it though. Those early kits came with a white metal engine and other details, and a small etched fret if I recall. The landing gear spats were smaller, as well as a different fuselage. I'm assuming that they will not retool those, much like how Tamiya in recent years plugged holes in their 1/48 A6M series with new tool kits, but kept the older ones unchanged.