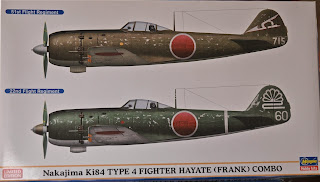 Although I have somewhat mixed feelings about the Hasegawa Limited Edition 'Combo' series, not least the nearly 200% retail mark up now usual for their kits here in the UK (meaning they are almost three times the price listed in Japan*), it was good to see that the beautiful but unattributed profiles on the box top of the Hayate Combo neatly juxtapose the two most typical schemes for the aircraft. The 51st Sentai subject (top) depicting the late-war factory applied scheme of olive brown with painted under surfaces and the earlier 'Depot' or field-applied scheme of dark green over natural metal for the 22nd Sentai subject, familiar from a well known colour photograph taken at Kimpo in Korea after the end of the war. It is surprising how many modellers still interchange the elements of those two schemes, depicting olive brown over natural metal or dark green over grey-green and whilst those choices could not be refuted absolutely they fall into the categories of 'less  likely' or 'untypical'.  When selecting a subject it is important to try to determine which scheme is most probable given date, unit, location and context but it is not always easy even from photographs and the presence of the anti-glare panel is not a reliable guide.

Hasegawa continue this useful juxtaposition with their painting instructions, suggesting GSI Creos (Gunze) 304 Olive Drab FS 34087 over 128 Gray Green for the 51st Sentai bird and another 101st Sentai markings option offered in the kit, then 129 Dark Green (Nakajima) over 8 Silver for the 22nd Sentai example. Those who have followed the ramblings here will recognise 129 as the approximation of the IJAAF # 21 'green' (midori iro 緑色) paint colour standard. After examining the colour photograph of the 22nd Sentai aircraft a paint more representative of the darker and more bluish hue of # 27 blue green colour (ao midori iro 青緑色) seems probable, but either would be reasonable choices on a model in the absence of any more definitive data.  GSI Creos 128 is a  'traditional' representation of Army Hairyokushoku and not bad, but all indications suggest that the factory under surface paint on Hayate was a warmer, amber-tinted grey which has been described as being like the top surface olive brown lightened with white (and which some assert was exactly that). 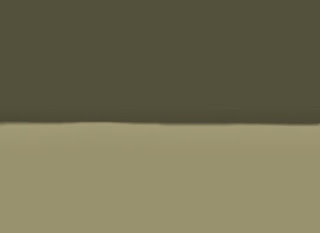 When preparations for the final defence of Japan in the Spring of 1945 saw the Hayate units designated for mobile defence duties as part of the Sei-Go plan there was a discussion with Nakajima about finishing Hayate in new paint colours derived from the IJN colours reconciled in the February 1945 '8609' document, deemed more suitable for over-water deployments. That would have seen top surface camouflage of 1-2, which superceded both the IJN 'green black colour' D2 and interestingly the Army colour 27, whilst the under surfaces would be painted 2-6, which superceded the IJN 'ash' or grey colour J3, described as Hairyokushoku - ash-green colour - in the Kari Kikaku 117 Shikibetsu Hyojun" (Provisional Standard 117 Colour Standards) issued with the Hikoki Keikaku Yuryusho Kaitei-an (Proposal for the revision of aircraft planning procedures) in March 1944. The decision was ultimately made to continue with the standard factory painting of 1-1 (which superceded IJAAF 7) over 2-6 (which also superceded IJAAF 1 Hairyokushoku) but it is possible that some trial aircraft might have been painted in the proposed non-standard colours and which found their way into unit operations.

Mark Smith's splendid 1/48th scale Hasegawa Ki-84 model above, which should have been shown here long before now and of which more images are to follow, is convincingly depicted in the late-war factory scheme and represents an aircraft of the 47th Sentai in the late Spring of 1945.

Subsequent Hayate Thoughts will explore some non-standard Ki-84 schemes that do not fall within these two categories. And because it is "buried" under another title this old blog from 2009 about  Army drop tank colours might prove useful linked from here.

* Since blogging this Mark Smith has very kindly provided a link to a very good deal for the Hayate Combo!

More please, both Mark and Nick.