The arrival of Aoshima's 1/72nd scale Shiden Type 11 (Kawanishi N1K1-Ja) their 'New WWII Fighter Series' in 1995 came as a complete surprise to many, more familiar with that company's pioneering but rather crude and clunky output of Japanese aircraft kits in the 1960s and 70s, remembered here, here and here. Here was a sharply moulded, well fitting and fine scale kit of comparable quality to Hasegawa.

Kit # 1 (01585) represented the first operational version of Shiden (紫電 - Violet or Purple Lightning), developed from the Kawanishi company's Kyofu (強風 - Strong Wind) floatplane fighter (of which more anon). This version of the rotund and pugnacious fighter is distinguished by a mid-wing configuration having the second pair of its quartet of wing mounted 20mm cannon in underslung gondola. The Aoshima Shiden kits tend to have sparse colour and markings instructions, usually not covering all the options provided on the decal sheet, and this one was no exception. The box art depicts an aircraft of the 341st Kokutai (Ku) - '341S-12' whilst the instructions show an aircraft of the 201st Ku- '201-53', but in addition to both the decal sheet provides a tail code for another 341st bird - '341-16 over S' - of the 341st's 402nd Hikotai. The decal sheet includes the chalked on 'Off-Limits'/'Keep Off' graffiti in English and Filipino for 201-53 as captured in the Philippines.

The 341st first took its Shiden into action over Formosa (Taiwan) in the early autumn of 1944, operating from Takao in the intercept role with A6M2 Zeros augmenting the new fighter in two of its three Hikotai. Towards the end of October the 341st staged into the Philippines in preparation for its invasion by US forces. The 201st is better known as a predominantly Zero unit with little information about its deployment of the Shiden.

In 2002 the N1K1-Ja kit was re-issued with new box art (above) and new decals for three aircraft in the 'WWII Ace Pilot' series, although only two of the options were shown in the instructions. They include  ヨ-117 of the Yokosuka Ku, 'C/343-36' of the 343rd Ku flown by Lt. Ryoichi Yamada, the leader of that unit's 3rd Hikotai 701 and 'H/341-152' of the 341st Ku flown by Takeo Yamada. The kit sheet also includes the tail code 'ヨ-801' applied to a captured F6F Hellcat which was tested at Yokosuka.

Kit # 2 (016275) also released in 1995 represented the N1K1-Jb or Otsu, distinguished from the 'a' or Ko by having the quartet of 20mm guns installed in the wings, like the later Shiden Kai, but retaining the mid-wing configuration. Curious box art for this one that appears to show a Shiden taking off from the side of a glacier! The decal sheet includes options for two aircraft of the Genzan Ku - ケ-1172 and ケ-1174 but also includes two sets of 1-0 digits in yellow to allow other codes to be made up and an image of the Japanese schoolboy cartoon character 'Fuku-chan' associated with captured Allied aircraft assembled at Bandoeng in Java. 'Fuku-chan' was the creation of cartoonist Ryuichi Yokoyama (1909-2001) who visited Bandoeng as a correspondent and painted the character on several aircraft there including a Douglas Boston and B-17E. Shiden usually had unpainted, natural metal under surfaces but some Japanese sources depict the Shiden of the Genzan Ku with the under surfaces painted grey.

Kit # 3 and 4 in the Aoshima 'New WWII Fighter Series' are the Focke-Wulf Ta 152 so don't search for them as 'missing' Shiden kits! In 1996 Aoshima released Kit # 5 (016947 above) representing the first production version of the Model 21 N1K2-J Shiden Kai with broad chord tail fin and a major modification to a low-wing configuration. This kit's decal sheet provides markings for 'B/343-03' of the 343rd Ku's (2nd) Hikotai 407 flown by WO Hiroshi Ohara and curiously the Model 32 prototype '517' - a N1K4-J - discussed in yesterday's blog. Also included is the tail number '91' for the Shiden Kai prototype in orange yellow.

Kit # 6 (017517 above) released the same year represents the N1K2-Ja or Ko, with the narrower chord tail fin introduced with the 101st production aircraft (c/n 5101). Markings are included for 'A/343-11' of the 343rd Ku's (1st) Hikotai 301, with additional tail codes 'ヨ-103' of the Yokosuka Ku, コ-K2J-6 for the sixth supplementary prototype Shiden Kai in overall orange yellow and an anonymous aircraft with the tail number '5423', an identifying production number applied to a Shiden Kai rolled out at the Kawanishi Naruo factory before gunsight and armament had been fitted.

In 2011 the two Shiden Kai kits were re-released with new box art in the 'Ace Fighters Story' series (above). In addition to the kits covered here there have also been limited edition re-issues of the Shiden Kai under the C.G. logo in rather unattractive boxes with cgi illustrations of aircraft (below). At the end of 2011 Kopro of the Czech Republic also announced the release of the Aoshima kits under their own label with new box art. 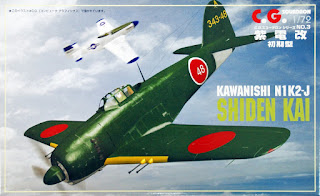 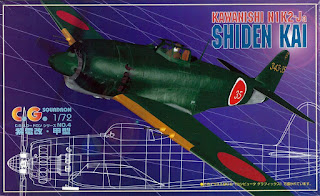 The latest and most recent re-release of Aoshima's Shiden Kai includes not just the parts for four air-to-air rocket bombs and their racks but also a new, improved cowling and cockpit interior (below).

At the time of their release the Aoshima Shiden and Shiden Kai filled an important gap in the availability of 1/72nd scale mainstream kits of the Kawanishi fighter, a gap further closed by the release of the Kyofu floatplane fighter in various guises by Hasegawa in 1996. It is probable that a good proportion of modellers have just bought the kits haphazardly to put a "George" in their collection rather than to build examples of each variant but the development from floatplane fighter to Shiden Kai is interesting enough to justify a line up. It is also possible to produce a line-up which displays a different scheme for each variant and the various units operating them.

Thanks for sorting it all out for me, Nick. I've got one and one on the way. Now I know what I've got and what to expect.

Great selection of box art, with exception of the amateurish CG Squadron ones.

Is there a Shiden / Shiden-Kai pdf in the works? Hope so, the one on the Raiden is excellent?...

Yes Mark - there is!